SURGE Puts Boots on the Ground in the U.S. Virgin Islands

SURGE scholars survey the landscape on a reconaissance mission to St. Thomas after Hurricanes Maria and Irma . ©Nnenia Campbell, 2018.

The reconnaissance mission provided SURGE scholars with a unique opportunity to explore the effects of hurricanes Maria and Irma, which devastated the U.S. Virgin Islands in September 2017. The team spoke with a diverse range of stakeholders in St. Thomas to learn about ongoing challenges resulting from disaster impacts in this community. 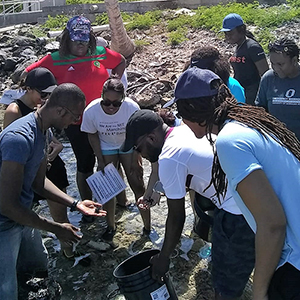 The SURGE scholars community engagement efforts included conversations with local school teachers, academic partners at the University of the Virgin Islands, and personnel from the Federal Emergency Management Agency and the U.S. Department of Health and Human Services. Local partners also invited the team to a hurricane preparedness meeting and facilitated tours of St. Thomas and St. John to so that the group could see hurricane damage and recovery efforts up close.

In addition to exploring hurricane impacts on the human and built environments, the team participated in marine debris cleanup and data collection support for mangrove restoration to better understand the storms’ effects on the natural environment. The SURGE scholars and leadership learned about how mangrove trees helped to protect against storm surge and why efforts were underway to re-establish damaged habitats. These service learning activities provided key insights into the importance of the marine ecosystem in St. Thomas.

Observing one of the central objectives of the SURGE mission, all of the scholars sought to leverage their various areas of expertise to provide support to the community. The students discussed their ideas with members of the St. Thomas Recovery Team and self-organized to initiate proposals for longer-term community involvement.

The SURGE team presented preliminary analyses from their reconnaissance mission in posters at the Natural Hazards Research and Applications Workshop from July 8-11 in Broomfield, Colorado.

The SURGE program is a partnership between investigators at the University of Nebraska Omaha, the Natural Hazards Center, and Bucknell University and is funded by the National Science Foundation’s Inclusion across the Nation of Communities of Learners of Underrepresented Discoverers in Engineering and Science (NSF INCLUDES) initiative.

The first cohort of SURGE is an interdisciplinary team of 10 exceptionally talented master’s and doctoral students, all members of underrepresented racial and ethnic groups within the hazards and disaster field, who were selected through a competitive application process.

To learn more about the SURGE project and keep track of ongoing developments, visit www.surgedisasters.com.