After Hurricane Katrina, news reports of crime and disorder—including stories of rape and violence at the temporary shelter located in New Orleans’ Superdome—were rampant. These stories, most of which were later proven false, had lasting effects on those who saw them. The takeaway for many, especially residents in other hurricane-prone areas, was that public shelters are not safe.

In actuality, crime is uncommon in disasters. Such fears, however, still drive evacuation and shelter decision-making and behavior, and can deter residents from leaving their homes or staying in shelters. It is important to understand why residents might not consider public shelters a viable option for sheltering and what can be done to quell their concerns about safety and violence . When people view public shelters as a last resort, it can impact the evacuation process, since many residents will try to leave the area and seek shelter elsewhere. Others might choose to remain in their homes when it is unwise to do so. In these cases, the public is best served by understanding that shelters are a safer option.

Such apprehension can also pose challenges in managing misinformation for those who operate public shelters and complicates local resident awareness of the safe and cost-effective sheltering alternatives available to them. The perception that crime exists in public shelters can keep people from taking advantage of such resources. 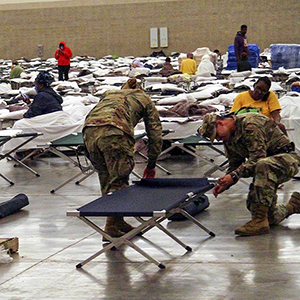 In our 2017 study on fear of crime and public sheltering, few respondents said they would consider staying in a public shelter, even if their first choice of alternative housing was unavailable. Based on telephone surveys of 424 residents of North Carolina—a location prone to hurricanes—179 people cited safety concerns about staying in a public shelter. The most common reasons for concern were general worries about personal security, mistrust of strangers, and falling victim to violent crime or property crimes. Being victimized was the most commonly cited safety issue for staying in a shelter, even more than the building integrity, health, or sanitation issues.

Women were more fearful of becoming victims of violent crime and sexual assault if staying in public shelters. Regardless of the actual incidence of crime, women are more likely to feel vulnerable in general, given the context of fear in public spaces. This is particularly true when they are alone. Public shelters are places where people with little to no previous contact must exist in close proximity. Several respondents mentioned a perceived lack of security in shelters, including the fact that they believed police would not be present to ensure safety. Overall, these concerns demonstrate that staying in a public shelter is accompanied by a heightened sense of risk.

Previous management of public shelters in disaster can also influence perceptions of safety. After Hurricane Katrina in 2005, there were numerous reports and rumors of crime, including sexual victimization, at emergency shelters. Though it has now been determined many of these reports were exaggerated or untrue, the concern about crime in shelters lingers. Respondents in our study often mentioned that they saw strangers as dangerous and not to be trusted, which added to their concern about crime. This is part of a larger narrative about crime that is not limited to disasters, but in disaster situations these misconceptions might seem more likely. That is why it is important to address such concerns when emergency managers and practitioners advocate for the use of public shelters.

Considering the misinformation about and distrust of public shelters during disasters—as well as the public’s fear of crime in general—those who oversee public shelters have several options to counteract falsities. Emergency communications should be developed for residents in disaster-prone communities to improve the perceptions about safety in local public shelters. These might include:

Even though incidents of serious crime are rare after disasters, perceptions and fear of crime affects people’s decisions to use public shelters. Public awareness campaigns about disaster shelters could be used to influence perceptions of crime during disasters. By emphasizing the safety and security of public shelters, emergency managers can address these fears and reassure residents that public shelters are safe locations.

Sexual Violence in Disasters: A Planning Guide for Prevention and Response
Louisiana Foundation Against Sexual Assault & National Sexual Violence Resource Center
This guide provides resources and practices for prevention of, and response to, sexual victimization in times of disaster. Its worksheets provide considerations and best practices for practitioners before, during, and after disaster.

Improving Public Messaging for Evacuation and Shelter‐in‐Place
Federal Emergency Management Agency
A guide for emergency managers that summarizes peer-reviewed research findings on public understanding and decision-making for evacuation and shelter-in-place protective actions, and data-driven recommendations for improving public messaging to inform the public about risk and to increase compliance with instructions to evacuate or to shelter-in-place.