Spokane Valley Fire Department crews assist with a prescribed burn at a nearby wildlife refuge. ©SVFD, 2015.

Wildfire is a natural process, but current wildfire behavior is often influenced by human action. Although many wildfires cause unwanted social and ecological losses, some also provide social and ecological benefits for fire-adapted ecosystems and human communities. So while wildfires are often framed as disasters, it is more accurate to see megafires—wildfires greater than 100,000 acres that significantly impact social, economic, and environmental systems—as the true problem.

The frequency of megafires such as California’s Tubbs and Camp Fires has increased substantially in the past two decades, and will continue to rise. What can we do to reduce their severity and impact?

One answer is to adopt mitigation practices that reduce the magnitude and severity of wildfires when they occur. An important mitigation approach is having forest landowners remove highly flammable vegetation—often referred to as hazardous fuels—near their homes and structures and on their forestland.

Ecologists studying wildfire are conducting research on how, where, and when forestland needs to be treated to reduce hazardous fuels. This can be accomplished by managing wildfires in remote areas; using manual or mechanical methods, such as thinning small- to medium-sized trees; or using prescribed burns to reduce surface fuels (i.e., harvest residue, leaf litter, small down wood) that cause fires to spread.

Numerous social, economic, and policy variables can influence a landowner’s ability to effectively implement such treatments, however. Social science can help us understand these variables and how to promote wildfire mitigation through hazardous fuels reduction—but it’s complicated!

Large wildfires burn across the landscape without regard to property boundaries. This means it’s important for neighboring public, private, and tribal forest owners in high-hazard areas to reduce fuels on their own property, and coordinate with their neighbors to plan the most beneficial treatments for everyone.

Different landowners, however, have different perceptions of wildfire risk and their forest management approaches, capacities, and property conditions can vary. This means that there isn’t one solution that will help everyone better reduce hazardous fuels. Instead, a set of actions that can be adapted to the needs and circumstances of different landowners is needed.

Research I am conducting in Oregon illustrates this point. In Oregon, fire-prone forests often contain a mix of public, private, and tribal lands. The U.S. Forest Service—which manages most of the federal forestland in Oregon—conducts a variety of hazardous fuels reduction treatments to protect at-risk assets, such as homes in the wildland-urban interface, municipal watersheds, wildlife habitat, and timber. But the agency faces constraints in reducing fuels in some priority locations and at the scale needed. 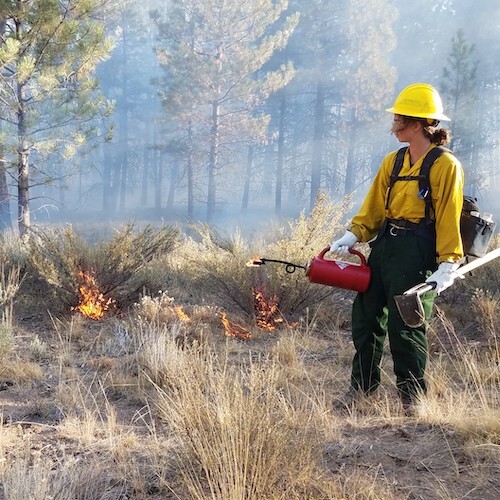 One issue is that agency funding for fuels treatments is limited and something must be done with the vegetation that’s removed. Markets for this material—which can sometimes be sold to make wood products or generate heat and power—are often lacking. This makes treatment less economical. Other problems include management policies that might prevent vegetation removal in high-hazard locations, or public controversy over some treatments. Managers may also face restrictions on using prescribed fire, including labor shortages and smoke concerns. Tribal forest managers face similar financial constraints and must also balance fire management with other factors such as protecting culturally important resources.

Private owners also have concerns. Corporate forest owners can be hesitant to use prescribed fire if they fear it could escape and destroy valuable timber stands. Mechanical treatments (which are typically more costly) may also not be an option if they can’t afford to remove vegetation that is not marketable. For family forest owners, they might not have the time, money, or technical expertise to remove vegetation. Or they may fear liability associated with prescribed fire or perceive their wildfire risk to be low.

It’s also important to realize that some landowners are more vulnerable to wildfire than others. They might have fewer resources to invest in homeowner insurance, structure protection, or cost-share programs for reducing hazardous fuels, as well as more limited access to financial and technical assistance. Therefore, investments to help mitigate wildfire risk are particularly important in places where socially vulnerable populations reside.

The good news is that progress is being made. A number of strategies that can reduce hazardous fuels across land ownerships are in place in Oregon and California and applicable elsewhere. These include:

Communities near fire-prone forests of the western United States must learn to live with wildfire. It will be critical for all types of landowners to work together to mitigate wildfire hazard and restore fire-resilient forests by reducing hazardous fuels on their properties. Adaptation measures such as increasing preparedness, and construction practices that improve the fire-resistance of homes and structures are also important. We can make it easier for people to live with wildfire in the future by giving attention to the social, economic, and policy factors that support this goal.