A World of Disasters: Knowing More and Losing More

Crowds throng in a densely developed street in New Delhi. More development and higher population is often blamed for increasing disaster losses, but there are more complex reasons. ©Joakart, 2014.

Scientific understanding of “natural” processes—especially in this context extreme events—has advanced considerably in the past few decades. The magnitude, frequency, location, duration, speed of onset, and other characteristics of many hazards can now be predicted and forecasted with more accuracy and further in advance than before.

Why is it, then, that in the United States and the world in general, property and economic losses associated with extreme events in “nature” continue to rise even while relevant knowledge and understanding has also greatly increased?

Possible Explanations for Why We Know More, and Lose More

Knowing more hasn’t helped to contain—let alone reduce—property losses, direct and indirect economic losses, and costly disruptions, although it should be noted that mortality and morbidity in disasters have declined significantly around the world. If knowing more enabled this success, especially in the more developed parts of the world, then why hasn’t it done the same for property and economic losses? 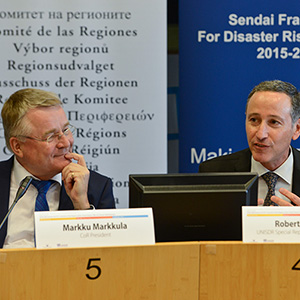 European leaders meet to sign an action plan related to the Sendai Framework for Disaster Risk Reduction. ©European Committee Committee of the Region, 2016.

A common explanation for the growth in aggregate economic disaster losses is that the world population has grown considerably and with it the world’s economy and assets. The reasoning is that there is simply more people and more wealth situated in harm’s way. This is a partial explanation, but it is nowhere near sufficient. If this growth really was a major factor then one might expect that losses would increase in proportion to economic growth. It is true that disaster statistics and data on losses are of low quality and not highly reliable, but the data seems to indicate that the growth in disaster losses has outpaced that of population and economy. A more effective use of the available scientific knowledge and improved technology could surely have been expected to ensure disaster losses would decline.

Recently the science and policy communities have attributed growing disaster losses to climate change. There is now stronger evidence that some atmospheric extremes are, at least in part, due to climate change. The extent to which this applies to the frequency and the magnitude of extreme events is still a source of scientific exploration and debate. While climate change may already be a factor—and may well become more significant in future—it certainly is not the only driver for the present and past growth in disaster losses.

Another often heard argument is that the better and increased knowledge has not been applied to the best advantage. Just “build back better,” as they say. Improvements are often promised after a disaster, and some are quickly made, often under the rubric of disaster risk reduction. Alas, these improvements are often small, incremental, not well sustained over time, and often leave out the most vulnerable residents. As a disaster recedes from memory, so does the determination to prevent recurrence. The perception of risk diminishes, and the collective thinking shifts to “not in my lifetime,” or “not while I am still living here,” or “not in my term of office.” Furthermore, the deployment of knowledge and technology can generate a false sense of confidence that the problem has been taken care of and won’t happen again.

The growth of the global economy, the onset of climate change, and inadequacies in the application of know-how, have all contributed in some degree to the growth in disaster losses. But even when taken together in aggregate they do not provide a sufficient explanation.

Another idea, sometimes called the cure-to-damage ratio, is gaining attention. This is the extent to which disaster risk reduction efforts (the cure) are overwhelmed by natural and technological processes that increase damage. This is beginning to be applied more to the climate change debate. Efforts to reduce greenhouse gas emissions and reduce concentrations are undermined by policies that promote the continued use of fossil fuels. These policies are aided by subsidies, tax breaks, and other support for exploration, extraction, processing, transport, and distribution and use. Are comparable processes at work in the disaster world? If so, what are the processes that contribute to disaster risk creation?

These questions received some attention during the negotiations for the Sendai Framework for Disaster Risk Reduction 2015 – 2030, which was adopted in 2015). Although Priority 1 of the framework is Understanding Disaster Risk, the overwhelmingly strong orientation is on disaster risk reduction, which is mostly taken to mean the reduction of existing or known risks.

It is encouraging to note that the preamble states “enhanced work to reduce exposure and vulnerability, thus preventing the creation of new disaster risks, and accountability for disaster risk creation are needed at all levels.” This thought is not flushed out in the text of the framework, but it is being taken up more widely in the disaster research community, which is encouraging.

One line of thinking is that the risk creation process is not just place or hazard specific, but that there are root causes that must be considered. Not only do environmental and social contexts produce cascading risks—as was so apparent in recent mega-disasters such as Hurricane Katrina in 2005, the 2010 Haiti Earthquake, and the 2011 Fukushima Disaster—but seemingly unconnected disasters could be linked by common underlying causes. Then what are such underlying causes and how might they be better identified and then addressed?

As risk creation continues unchecked, disasters are becoming larger and more frequent with more people affected each year. We are reaching a disaster tipping point. And these disasters will continue to happen until the threads converge and change becomes not only possible but inevitable. Knowing more is not enough. Understanding and action is what is needed.