Disaster Subcultures Can Save Lives

A tsunami-proof neighborhood in Talcahuano replacing the homes that were lost due to the tsunami that hit Talcahuano. ©Karen Engel, 2014

A magnitude 4.0 temblor shakes the nation of Chile five times per week on average, and most Chileans barely notice. The nation lies near the intersection of three tectonic plates and the threat of more severe earthquakes, magnitude 7.0 or greater, is a constant presence. Over the centuries Chileans have developed a body of knowledge to help them cope with this ever-present threat. This disaster subculture played an important part in saving people’s lives in the Greater Concepción area after a magnitude 8.8 earthquake that triggered a tsunami struck the region in February 2010.

Disaster subcultures develop in places where the following three factors are present: (1) there is a recurring threat of a specific type of disaster, (2) the threat allows for a period of forewarning, and (3) the damage from the disaster cuts across class divisions within the community. To study the role that the disaster subculture of the Greater Concepción area played in the aftermath of the 2010 earthquake and tsunami, our research group interviewed 93 survivors individually and 147 survivors in group settings, about their experiences during and after the disaster. The interviewees came principally from the coastal community of Talcahuano and the inland community of Hualqui. 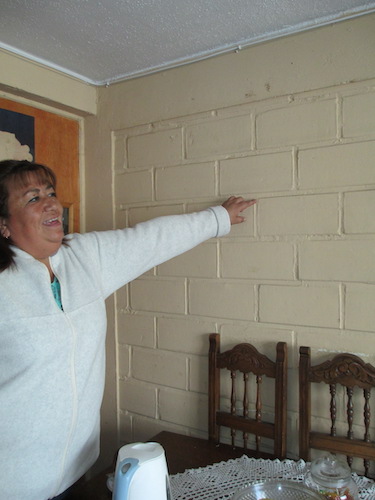 The interviews revealed a set of values ingrained in the disaster subculture. Survivors spoke of community solidarity that took the form of helping elderly people and people with disabilities to higher ground before the tsunami struck. The communities had volunteer fire brigades who came together to assist during the disaster. Respondents also reported that they didn’t see themselves as victims, and that they did not feel like they were at the mercy of nature. Some even saw the disaster as a re-development opportunity. One respondent said, “emergencies are opportunities because previously tight resources are finally released.” Talcahuano used disaster recovery funds to enact a plan that was already in place to improve the city’s appearance. Hualqui used their funds to address a housing shortage. These types of outlooks and actions worked together to make the communities more resilient to the effects of the earthquake and tsunami.

Cultural knowledge also helped individuals survive the disaster. People were used to going outside and heading to high ground after a severe earthquake. The guideline that was used by many interviewees was if the earthquake was strong enough to make a person fall then a tsunami was likely and it was important to immediately head uphill. This practice pre-dates the Spanish colonization of Chile. It actually began with the indigenous Mapuche people who would gather their food and children as soon as the earth stopped shaking and climb the nearest hill or mountain. This belief allowed the people of the Greater Concepción area to quickly assess the risks the disaster posed and rapidly take action to protect themselves. However, these beliefs are mostly held by people living near the coast. Respondents from inland areas were less likely to have this knowledge, and people from outside of Chile were unlikely to have it at all. One result was that tourists who were camping in Pellehue and Curanipe were killed by the tsunami. 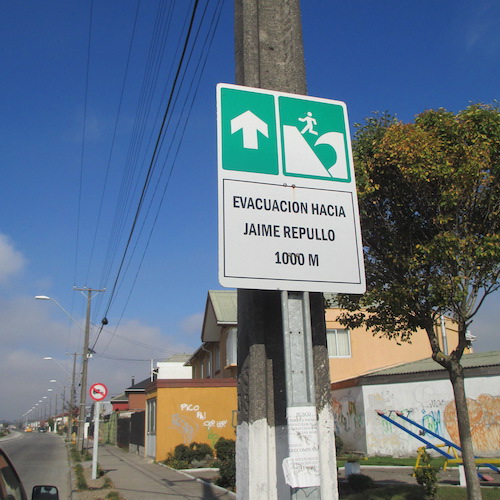 To increase tsunami evacuation knowledge, especially for people visiting or new to the coastal city of Talcahuano, signs have been placed to indicate evacuation routes in case of tsunamis. ©Karen Engel, 2014

In addition to traditional knowledge, new technologies are also available to help mitigate the threat of earthquake-triggered tsunamis—although our research revealed their effect is mixed at best. The Pacific Tsunami Warning System, which is made up of a network of seismometers, ocean pressure sensors, and sea-level monitoring stations, was in use at the time of the 2010 disaster. Officials in Chile, however, seemed to ignore the warning it provided. Officials stated that the earthquake was expected to generate higher waves but that the impact would be limited. Respondents told of police officers saying that it was safe for people to return to their homes in low lying areas. The result was that many more people were killed by the tsunami that followed than would have been if they had relied only on centuries old local knowledge.

Interviews with disaster survivors revealed several areas for improvement in disaster response. Matching donated goods to the needs of survivors resulted in surpluses of items that were not needed but nevertheless took valuable time to dispose of. The volunteer fire brigades from poor areas were under trained and under resourced compared with their counterparts from wealthier neighborhoods, a disparity that should be dealt with to provide better response in the future. Disaster aid was also concentrated in the areas that received the most media attention resulting in some heavily damaged areas receiving inadequate amounts of aid. The Pacific Tsunami Warning System was retired in 2014, but its failure revealed that a complex warning system that relies on input from too many sources is too slow to be relied upon in an emergency.

The disaster subculture of the Greater Concepción area, however, served the residents well by giving them the tools to quickly assess the level of threat they were facing and take appropriate protective actions. The attitude of looking forward to a new normal rather than feeling resigned to the destruction of constant disasters may be the greatest resource for keeping threatened communities resilient.

About the Special Collection

This special collection of Research Counts grew out of a longstanding collaboration between the International Journal of Mass Emergencies and Disasters (IJMED) and the Natural Hazards Center. Our commitment in this special collection is to bring key findings and ideas from recent IJMED articles to a broader audience of emergency managers, disaster risk reduction professionals, and policy makers in the hazards and disaster field.

This Research Counts article was written by freelance journalist and editor, Zach Zorich. It is based upon the following publication: