On May 12, 2008, the province of Sichuan, China was rocked by a 7.9 magnitude earthquake. What soon became widely known as the Wenchuan earthquake killed nearly 370,000 people, making it the fifth deadliest earthquake in the world since 1950. An estimated 375,000 people were injured, 18,000 went missing, and five-million were left homeless.

China’s central government devoted 1.7 trillion Chinese Yuan (roughly $250 billion) to a three-year long recovery effort. Rural populations were hit especially hard, and the central government saw the earthquake recovery effort as an opportunity to not just re-build but re-develop rural economies and livelihoods. The effort produced mixed results and offers some clear lessons for improving disaster recovery both in China and in rural communities around the world.

Immediately following the disaster, the central government plan called for constructing urban-style condominium units to house displaced people. The units were made available at no or very low cost to the residents and nearly everyone took advantage of the offer. The central government also offered to pay families to rebuild their own homes. These two different options offered a natural experiment showing which option worked best in the long term for the residents of rural Sichuan.

This long-term project was launched soon after the disaster and focuses on rural mountain communities that were devastated by the earthquake. I interviewed 19 members of 11 farming families located in nine communities. Eight families opted to rebuild their homes immediately after the earthquake. The remaining three families lived in the government-built condominiums for about one year before returning to their original homes to rebuild. The three families that had experience with both home types reported greater satisfaction living in their self-rebuilt homes than living in the condominiums. 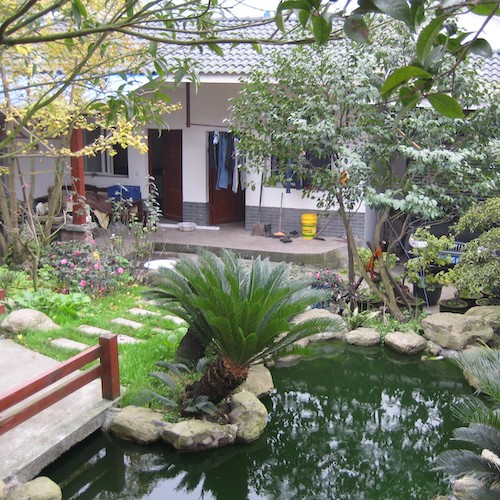 The inner yard of a self-constructed house in the plain area maintains the traditional rural lifestyle. ©Haorui Wu.

Several factors help explain why the self-rebuilt homes were more desirable than the government condominiums for this sample. All 11 of the focal families had lived in the area for several generations and had an intimate knowledge of the environment around their homes. In addition, they each had strong ties to their communities. This practical knowledge and ability to draw upon the labor of friends and relatives are a large part of what made the self-rebuilding efforts a success. One middle-aged man emphasized the importance of traditional building skills in reconstructing his home: “There were skilled workers in my village or the village close to us, like mason and carpenter. Their skills are family inherited, developed for several generations.”

All of the self-rebuilt homes used locally sourced stone and mud for the foundations and wooden frames sometimes reinforced with steel beams. This was an important safety feature for one older couple who noted that, “the collapsed buildings were [almost all] concrete boxes; our old houses all survived.” They went on to say: “My great grandfather built our old houses with stone and mud as the foundation and wooden framework. Four generations have lived in that house. It still stands and is usable.” Self-rebuilding allowed the residents to make safer houses by choosing appropriate locations and materials for their homes, which protects their fundamental right to have a safe place to live.

The self-rebuilding effort also provided cultural benefits. One middle-aged woman with two children in elementary school said, “building a house is really one of the biggest events in the whole family.” Her brother-in-law hired the laborers, and her sister-in-law bought most of the construction materials while her parents watched the children. Her two brothers and sister drove in to help. A middle-aged man said that building the house allowed him to spend time with friends and neighbors who were usually away doing migrant labor. He said, “it was like a festival in my village, just like a wedding or a lunar New Year gala…It was really teamwork, and all my neighbors came to help.”

By contrast, living in the condominiums separated old neighbors and isolated elderly residents. One older woman reported that she couldn’t see her friend who had trouble walking and lived on the fourth floor of a building with no elevator. A young mother worried about her daughter playing without adult supervision in the condominiums, saying that she never had to worry about kids playing in the village. Living in the condominiums also meant that residents had to give up farming as a livelihood. Many of them were employed through public works programs but when funding for those programs ran out, they struggled to find other jobs.

While the central government’s top-down approach of quickly building condominium units served the immediate need to house displaced people, it did not do as good a job of meeting their long term needs as the grassroots self-reconstructed homes did. Not all communities have the close-knit community ties and depth of local knowledge that the rural mountain town of Sichuan possess, but this community-driven approach to disaster recovery does provide a model that can be used in other settings. For example, villagers in Chile were provided with “half a good house” after an earthquake and tsunami devasted communities in 2010. These half-completed houses allowed residents to finish the other half in whatever way suited their needs. Another example comes from Sri Lanka where farmers collaborate to use weather and climate forecasting to predict droughts and allows them to divide farmland in a way that provides water equally to everyone.

These grassroots programs provide an effective complement to centralized government disaster responses. As this research shows, such programs can transform disaster survivors from being passive recipients of government aid to actively taking part in making their homes and communities more prosperous and resilient in the long term.

About the Special Collection

This special collection of Research Counts grew out of a longstanding collaboration between the International Journal of Mass Emergencies and Disasters (IJMED) and the Natural Hazards Center. Our commitment in this special collection is to bring key findings and ideas from recent IJMED articles to a broader audience of emergency managers, disaster risk reduction professionals, and policy makers in the hazards and disaster field.

This Research Counts article was written by freelance journalist and editor, Zach Zorich. It is based upon the following publication: