Through the Fog of Disaster: The Process of (Re)Creating Inequities

The St. Bernard Public Housing development sits abandoned in 2006 after Hurricane Katrina. Plans were made to replace the development with low-income townhouses. Previous residents were promised assistance to relocate. ©John McQuaid, 2006.

It is unsurprising—and well-documented—that the same social processes shaping communities before disasters shape post-disaster outcomes. At the same time, disasters set in motion additional political processes that determine if, when, and how families are able to return and rebuild their lives and their communities. Despite their critical importance, these processes are rarely transparent and are largely governed by a government-corporate-elite alliance that sets the rules for recovery. A cautionary tale can be seen in the Hurricane Katrina recoveries of both Mississippi and Louisiana, where this type of political alliance produced even greater inequities than existed before the hurricane.

In 2005, when Katrina made landfall, Republicans controlled the presidency and thus the executive branch, both houses of Congress, the Mississippi governorship, and the state’s congressional delegations. Democrats, by contrast, led New Orleans and Louisiana. By any measure—extent of disaster, buildings damaged or destroyed, individuals and businesses affected—New Orleans and Louisiana suffered greater losses. Yet proportionate to their losses, Louisiana and New Orleans received fewer federal dollars for recovery. The Republican-led Congress ruled that no state could receive more than 50 percent of recovery dollars—thus limiting Louisiana and benefitting Mississippi.

In the fog of disaster, a state of emergency is used to justify the abandonment of ordinary regulations on government contracts thereby allowing, for example, no-bid contracts or waived minimum-wage requirements. In fact, in May 2009, Mississippi Governor Haley Barbour— who was roundly praised for his leadership in the state’s Katrina recovery—told Congress the Community Development Block Grant (CDBG) program was an “…effective vehicle to deliver disaster relief, but only with sufficient latitude to insure recovery programs were not hampered by normal CDBG regulations and restrictions.” The 2017 hurricane season has wrought havoc in Florida, Texas, Louisiana, and Mississippi—all states with Republican-dominated political leadership. Houston, a Democratic stronghold in a Republican-controlled state, had to fight the governor for its initial allocation of funding. Nationally, Congress is poised to allocate proportionately more funds, and to respond more quickly to Republican-led states than to the Democratic-led U.S. territory Puerto Rico, where, weeks after Hurricane Maria, residents are driven to drinking water from polluted rivers and Super Fund sites. 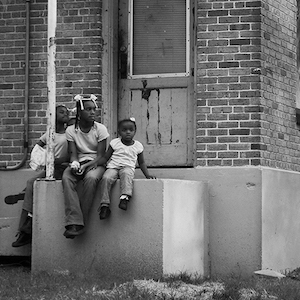 A family sits on a stoop in the St. Bernard Public Housing development on Martin Luther King Jr. Day in 2007. Crowds overcame chain link fences and barbed wire to take back the development after being blocked from returning to their homes for more than 16 months. ©Craig Morse, 2007.

State Governors and the Allocation of Individual Recovery Dollars

After Katrina, federal agencies such as the U.S. Department of Housing and Urban Development (HUD) sent recovery/housing rebuilding block grants to state governors who established priorities for allocation. Mississippi’s Rebuilding, Recovery, and Renewal Commission—established by the governor to recommend priorities for recovery dollars—was led by a board of seven men: six white corporate CEOs and the African-American head of the NAACP. Although they held 50 public meetings across the state, the final priorities for housing grants were assigned to: 1) Insured homeowners; 2) Economic development and infrastructure; and 3) “Workforce” housing (i.e., housing for families above low-moderate income levels).

Rationales for Inequitable Treatment and “Deserving” and “Undeserving” Groups

Mississippi’s powerful business and government leaders’ framing of the disaster fit a larger narrative of Mississippi as deserving and Louisiana as undeserving of resources for recovery and positive attention by the media.

First, business and political leaders in the state argued that Mississippi was indeed more deserving because the damage it suffered was produced by a direct hit from the storm—it was a natural disaster. But the damage in New Orleans and Louisiana resulted from the failure of the levees—it was a man-made disaster. Second, they argued that the Mississippi government’s response and recovery was efficient and effective, in part because of the government’s close collaboration with the business community, while New Orleans’ and Louisiana’s government was characterized as corrupt and its response inefficient and ineffective. Finally, they portrayed Mississippians as self-sufficient, independent, and proud and New Orleanians as dependent, looking for government handouts, and even criminal. While race and class were rarely discussed explicitly by these powerful actors, the racialized insinuations and the class-based assumptions were never far from the surface of these arguments.

This dynamic is at work again today, with a dominant political party presenting a narrative that conflates deserving and underserving communities with their racial and ethnic composition and leadership, as well as their political affiliations. Similar processes are playing out in the contrasts made between Puerto Rico and the Virgin Islands versus Texas and Florida. These demonizing, controlling images then serve as the rationales for inequitable treatment—using race and the political parties most closely aligned with them to justify unequal allocations of money, resources, information, and aid. Later, they will likely be used to explain the rates of recovery that will inevitably follow.