Part I: Why is Houston so Vulnerable to Flooding?

A Houston suburb as seen from the air. Houston's fast-growing development has led to greater flood risk. ©Wayne S. Grazio, 2015.

Houston and surrounding regions were pounded by Hurricane Harvey with more than 50 inches of rain, setting new records. But why has the city become a symbol of flood disasters?

Harvey and its devastation is only the latest in a decades long history of back-to-back events. The 2016 “Tax Day” flood that struck the city on the same day as the deadline to file federal income taxes and came just under a year after the Memorial Day 2015 flood. Both events produced more than a foot of rainfall and, combined, caused 16 deaths and more than $1 billion in damage. While these events are less severe than Harvey, their cumulative effect reinforces the city’s status as the most flood-prone city in the nation.

Climate change will bring even more frequent and severe rainfall to cities like Houston. Understanding factors that cause the increasing risk to life and property is critical to Houston’s future and that of other cities facing similar threats.

The need for pro-active planning is greater now more than ever.

Unfettered, rapid growth is a key factor driving hazard risk and subsequent disaster losses. Houston’s metropolitan area is fifth largest in the United States with a 2016 population of 6,772,852. It is one of the fastest growing metropolitan areas in the nation and the population is projected to top 10 million by 2040. 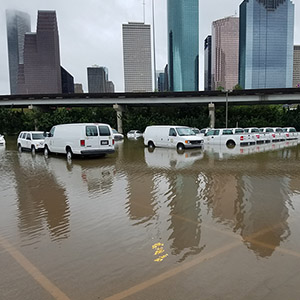 This growth alone is not necessarily a problem. Growth can produce economic development, jobs, and more investment in public services and environmental protection. But poorly planned and managed growth that fails to coordinate the location and design of housing, businesses, and public infrastructure (including roads, water, sewer, and open space protection) can lead to serious problems. Unchecked development in hazardous areas can result in catastrophe.

State and local officials in Texas have long taken a hands-off approach to planning for growth that is not backed by land use regulations, incentives, and public infrastructure investments. They have favored an unfettered, market-driven strategy for land use that allows haphazard development patterns across the landscape. The Houston region is ranked as having one of the highest levels of sprawl in the United States), which indicates that geographic growth of development spread across the landscape far exceeds population growth.

Another associated problem of unplanned growth is the paving over of vast expanses of environmentally sensitive areas that absorb significant amounts of rainfall. In the case of Houston, wetlands and prairie land have been paved over, generating stormwater runoff during rainfall events. More runoff expands the geographic coverage of downstream floodplains and can exceed the capacity of the city’s natural drainage ways of creeks and bayous, as well as flood control infrastructure such as levees and detention basins.

Harris County—home of Houston—is the third most populous county in the nation (4.4 million in 2014). With this growth has come a loss of vast amounts of environmentally sensitive areas. Between 1992 and 2010, for example, the county lost 30 percent of the freshwater wetlands. 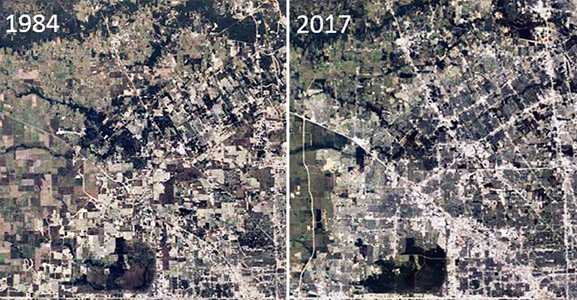 Widespread protection of environmentally sensitive areas would have some impact in reducing flooding from Harvey, but major reduction of flooding would not have been possible for this record-setting event. For less severe and more frequent floods, protecting environmentally sensitive areas could help make Houston less vulnerable by storing floodwater. Additional ecological benefits vital to the resiliency and quality of life of Houston would include cleaning polluted runoff, maintaining stream flow by gradually releasing water during dry periods, supporting recreation, and offering fish and wildlife habitats.

Poor urban planning is often associated with an underinvestment in flood control infrastructure that does not keep pace with expansion. Houston is an auto-oriented city, with state and local investments in multi-billion dollar projects supporting one of the most advanced systems of roads and highways in the world. The core goals are to keep traffic flowing and make land readily accessible for real estate development on the city’s ever expanding periphery. But state and local officials have demonstrated little consideration to the long-term consequences of all that concrete and development on flooding.

One striking example is the partially completed the Grand Parkway—State Highway 99. Once finished, this 180-degree loop will encircle a metro region that is about the size of Rhode Island. Another example is the recent widening of the Katy Freeway to 23 lanes. Unless proactive land use regulations are enacted, the unbridled sprawl generated by these multi-billion dollar mega-projects on the city periphery will cover vast expanses of land and generate large amounts of impervious cover.

Investment by the city and state in flood control falls short compared to highway building. The Sims Bayou watershed which runs through the southern part of the city exposed an additional 3,500 households to flooding between 1980 and 2000. This is the consequence of an increase of impervious surface by 15 percent, causing an increase in runoff that exposed more areas to flooding. In this case, expansion of the capacity of flood infrastructure to control flooding does not meet the growing demands of urban growth.

For more on lessons Houston might learn from other cities, please see Part II of this piece.