A Look at How the U.S. Public Perceives Zika 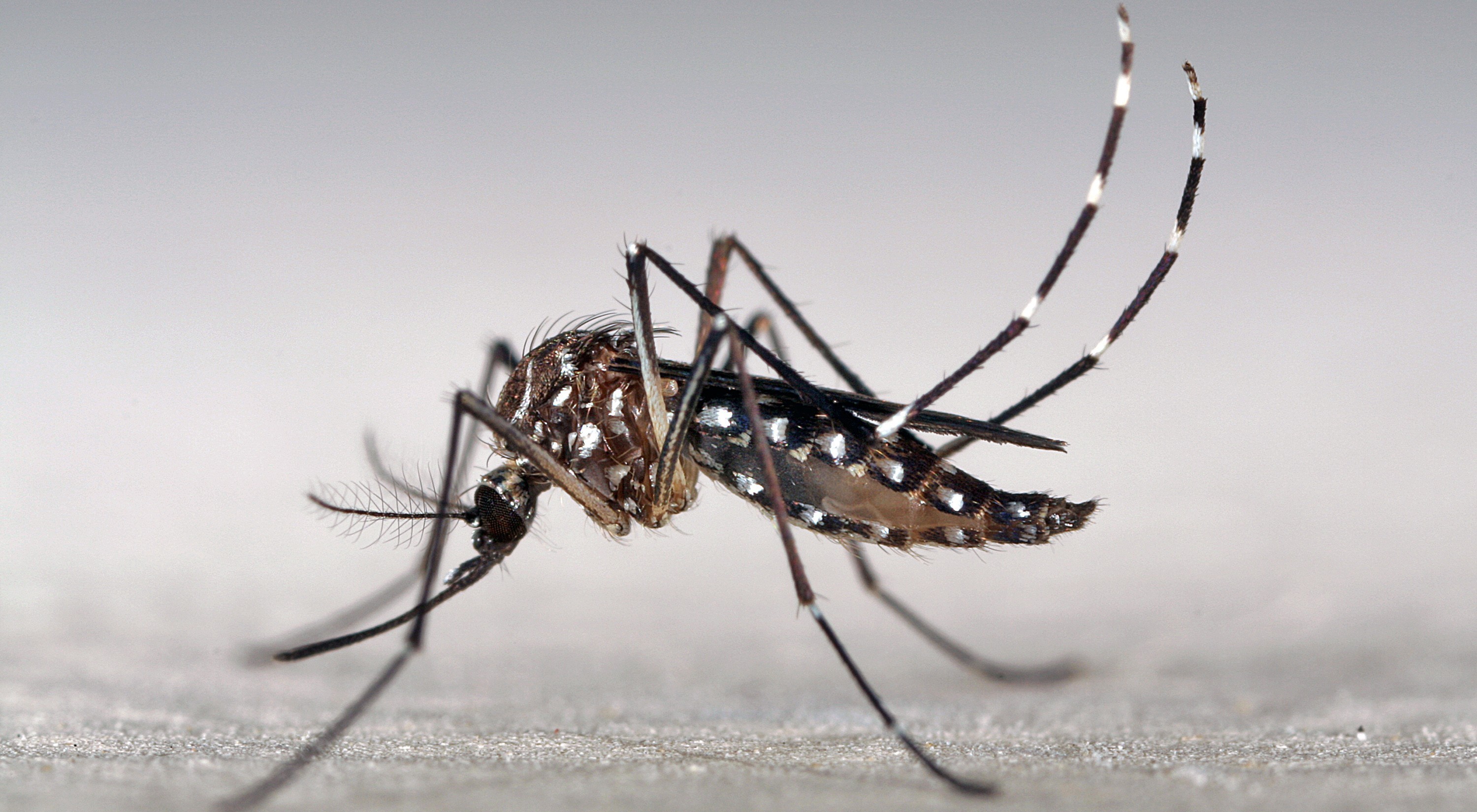 The New York University Program on Population Impact, Recovery, and Resilience has recently released an eye-opening report on the public perceptions of Zika, a mosquito-borne virus present in more than 50 countries worldwide. A key takeaway from the report is that while a large majority of the U.S. public is aware of the virus, fewer than half understand how the virus is transmitted, that most people who contract the virus are asymptomatic, and that the virus can cause birth defects. As Zika continues to spread throughout Puerto Rico and the continental United States it is vital that public health officials understand how much residents know about the potential dangers of Zika infection. The study’s authors, David Abramson and Rachael Piltch Loeb, have generously allowed an abbreviated version of the report to be reprinted here.

The public health sector is presently on high alert for evidence of local transmission of the Zika virus in the United States as well as infections that have been acquired. A number of national, state, and local health officials are actively engaged in vector control, surveillance, and diagnostic and communication activities focused on the virus. Even if major outbreaks do not materialize, public health officials are concerned about the possibility of a sharp increase in babies with congenital birth defects and other neurological deficits linked to Zika in pregnant women.

This high level of situational awareness and concern in the public health sector, though, is not mirrored among the general public. Although most U.S. residents are generally aware of the virus, their specific knowledge regarding its symptoms and transmission routes is incomplete, their personal sense of threat of Zika infection is relatively muted, and their receptivity to various public health intervention strategies varies by factors such as gender, age, and political ideology, among other characteristics. According to surveys of the U.S. population conducted by the NYU Program on Population Impact, Recovery, and Resilience, more than 80 percent of U.S. residents are aware of the Zika virus, but fewer than 40 percent know that the viral infection can be asymptomatic, could cause severe birth defects, and can be sexually-transmitted. Support for public health interventions varies greatly, as well.

Public health officials responsible for formulating risk messaging campaigns about Zika should be aware of these and other underlying factors that may influence the public’s support of various public health interventions; simply educating the public to the potential risks and dangers of Zika infection may be insufficient to appropriately mobilize the public in the event of major outbreaks.

The Zika virus that emerged from South America in the past year poses a novel threat to humans. Similar to West Nile virus, malaria, or dengue, Zika is a vector-borne disease carried by mosquitos. Unlike those viral infections, Zika is unique in that it may also be sexually transmitted, although its level of infectiousness as a sexually transmitted disease is still uncertain. Furthermore, its most susceptible victims appear to be babies in utero, who are at risk for microcephaly and neurological and developmental disabilities.

Because of these multiple transmission pathways—and the scientific uncertainty about the virus’s infectiousness—the hazards which place women and their babies at risk encompass a range of risk factors that can challenge public health officials in communicating about the threat of Zika. Public health strategies include environmental tactics focused on controlling mosquito populations; behavioral strategies, such as reproductive decision-making (delaying pregnancy, using contraceptives, or avoiding travel to areas with Zika infections); and clinical interventions, including screening and testing for infection and the availability of pregnancy termination services.

Compounding Zika’s challenge is that it is mainly a silent infection. Four out of five people infected with Zika show no symptoms. Among those who do, the symptoms are often somewhat mild and short-lasting, and can include fairly non-descript symptoms such as a rash, fever, and headache. It is still unknown how infectious asymptomatic individuals are, and equally unknown how long the virus incubates in blood and semen.

To date, the Zika virus has infiltrated 50 other countries in the Americas and the Caribbean and is making inroads to the continental United States. Given the absence of medical countermeasures such as vaccines or treatments, the basic public health strategy in the United States has been to focus on aggressive vector control campaigns in areas likely to be breeding grounds for mosquitoes that carry the virus and to be prepared to mobilize quickly in the event that outbreaks occur. Much of the strategy is predicated on targeted risk communication. As such, it is critical for public health officials to know their potential audiences, the public’s knowledge and attitudes about Zika, and the public’s general receptivity to the most common public health strategies and messages.

The Program on Population Impact, Recovery, and Resilience (PiR2) at NYU’s College of Global Public Health is conducting research on Zika funded by the National Science Foundation. The study relies upon a series of four nationally-representative population surveys conducted over the span of a year to examine how various social, scientific, and policy cues influence the U.S. public’s perception of the risk of the Zika virus over time, as well as the public’s receptivity to various clinical, environmental, and behavioral interventions. This report is based on surveys with 2,464 randomly selected U.S. residents over two waves of data collection. A telephone survey of 1,233 US residents was conducted in April and May of 2016 and repeated with 1,231 U.S. residents in July and August of 2016.

Awareness is not knowledge

Awareness and knowledge of the Zika virus are distinct constructs. At its most basic, awareness reflects the broadest appreciation of the existence of the Zika virus. U.S. public awareness of Zika has changed in a short period of time. To estimate public knowledge about the Zika virus Abramson and Piltch Loeb constructed a measure that encompassed a respondent understanding that the Zika virus could (1) cause birth defects, (2) be expressed as an asymptomatic infection, and (3) be sexually transmitted.

As reported in Table 1, below, although the proportion of the U.S. population or the subset of women of child-bearing age who are aware of Zika has increased in the three-month span from April to July, more specific knowledge about the virus remains low and has not changed over time. The authors found there are socio-demographic differences in who is aware and knowledgeable of Zika. Among the overall public, those likely to be more aware were women, older adults, non-Hispanic white adults, those with higher incomes, republicans, and those with higher education. Women and adults with higher education are also more likely to be knowledgeable about the virus. There are fewer socio-demographic differences when the analysis is restricted to women of child-bearing age, between the ages of 18-45, and they are slightly different than the overall population.

Intervention receptivity is varied and influenced by risk and knowledge

Abramson and Piltch Loeb examined receptivity to three specific possible public health interventions: the behavioral intervention of delaying pregnancy, the environmental intervention of indoor spraying, and the clinical intervention of supporting access to federally financed abortion services for Zika-infected pregnant women. Among the overall U.S. population, 50 percent would delay pregnancy by a year or more, 39 percent would agree to indoor spraying; and, 62 percent supported the availability of federally-financed abortion services. As the authors did with Zika awareness and knowledge they conducted bivariate, followed by multivariate analyses to paint a more nuanced picture.

First the authors analyzed the behavioral intervention of delaying pregnancy. Hispanics, those with less than a high school education, those in the highest income bracket, young adults, those living in northern states, those attending to government sources for information, and those who believe they are at greater personal risk for Zika are the most likely to delay pregnancy. On the other hand, non-Hispanic whites, those making less than $50,000 annually, and republicans are least likely to support delaying pregnancy. 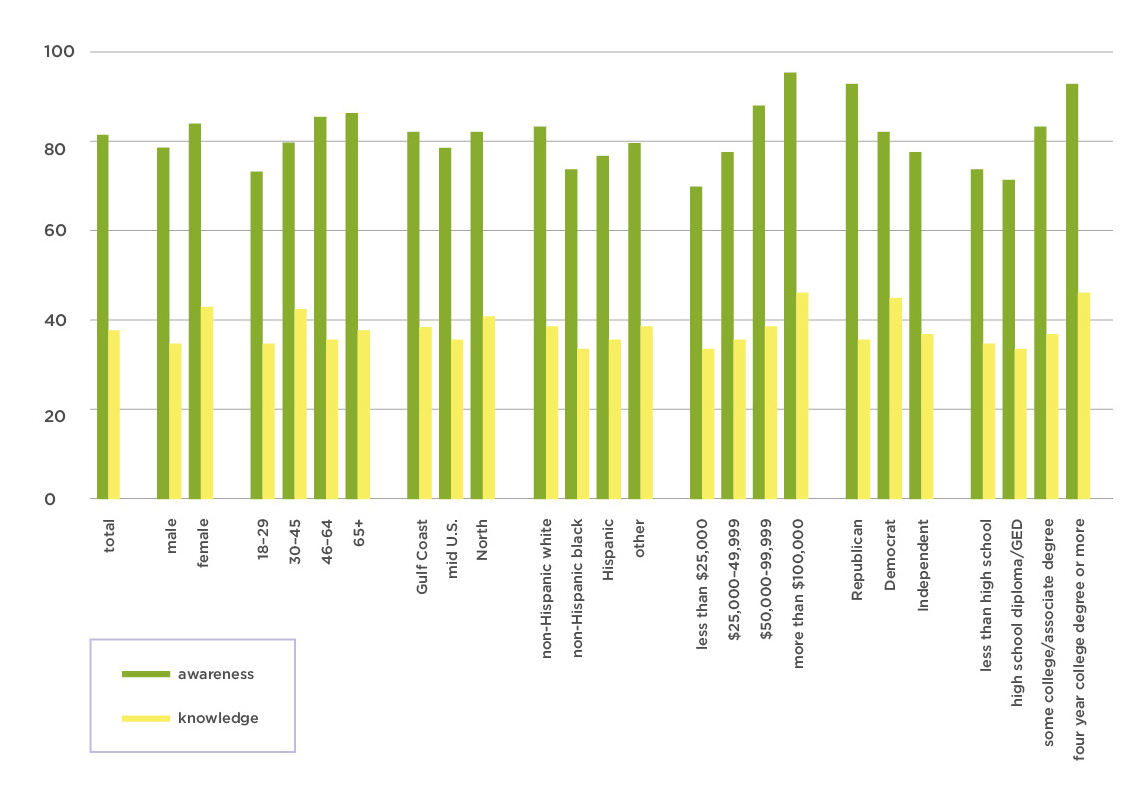 Demographic Differences in Awareness and Knowledge of Zika.

The public was least receptive overall to the environmental strategy of having public officials conduct indoor spraying. Those who identify as Hispanic were most likely to support intervention, as were residents with less than a high school education, young adults, and those who were confident in government. Republicans and older adults were the least likely demographic groups to support this intervention.

Clinical strategies, represented here by whether an individual supports federally available abortion services for women impacted by the Zika virus, had the highest overall support, at over sixty percent. Democrats, those of “other” race, and those with knowledge of the Zika virus were most likely to support this intervention. Those who were not confident in government and republicans were least likely to do so.

In multivariate analyses, democrats, independents, and those who are most knowledgeable about Zika were most likely to support access to federally financed abortion services, all other factors being equal.

Although there have been limited outbreaks of Zika infection in the continental United States, the threat of the Zika virus remains present. In the absence of medical countermeasures such as vaccines and anti-viral treatments, the most effective tools relate to prevention, mitigation, and surveillance. For all of these, public health risk communication is critically important to generate support for public health intervention campaigns, and for encouraging those population practices which can limit viral transmission. Among the key findings from this initial analysis of U.S. public attitudes, behavior, and knowledge are the following: