Inmates: Our Defenders in Disaster 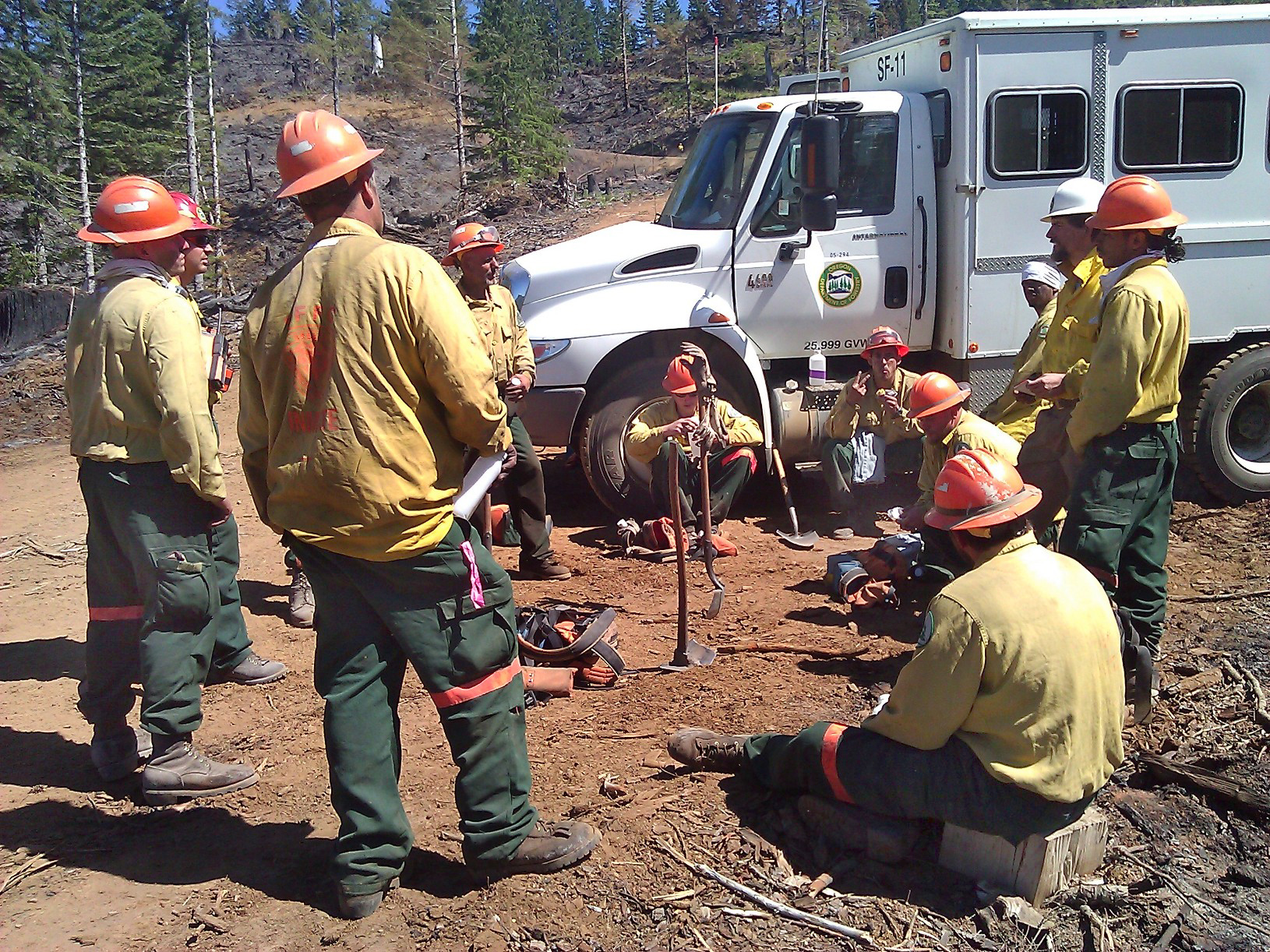 WHEN WE think of prisoner labor we generally might imagine inmates picking up highway trash or manufacturing license plates. A less well-known fact is that inmates also assist the public in times of disaster by serving as emergency responders. The experiences of inmates remain isolated from the general public, so it’s no wonder that few people know about the role of inmate labor in disasters, or the possible impacts such services may have on incarcerated populations or the general public. In response to this gap in understanding of this practice, I dedicated my master’s thesis research to the role of inmate labor involved with emergency management plans across states in the United States.

Ultimately, I found that inmates are included as a labor resource in emergency planning in a majority of states across the nation and could be taxed with providing a large variety of services vital to emergency response. Additionally, I found that how emergency-planning documents categorize and perceive inmates varies, and this variation could present challenges for both inmate and emergency-management populations. Inmates are not only identified as a labor resource in emergency-management planning documents. They are also identified as a hazardous population that poses an additional risk to the public, as well as a vulnerable population that requires additional protections to ensure their safety during a disaster. My research raises numerous questions about how the perception of inmates by emergency management affects the inmates’ experiences during a disaster, their safety and well-being, and how the public acknowledges—or ignores—the connection between “hero” and “prisoner.”

In the United States, more than 2.2 million people are currently incarcerated. Most of them are often considered socially vulnerable by disaster scholars—namely, low-income, less educated men who are disproportionately racial minorities. This enormous population of people behind bars provides a cheap labor source for many industries and enterprises. The use of inmates for free or cheap labor has a long history in the United States. Most notably, the 13th amendment to the U.S. Constitution allows for the forced labor of any persons convicted of a crime. The intent of the amendment was to make slavery illegal after the Civil War, but prisoners were exempt from this policy. This amendment was and continues to be used to provide a large, expendable, and cheap labor force in various industries, including emergency management.

There is no widely available data on inmate labor during disasters. Thus, I examined state-level emergency management plans to understand how these documents, which lay out the coordination of various public and private entities roles in disaster response, discuss inmates. I had planning documents from 47 states, 64 percent of which explicitly identify inmate labor as a resource for response and recovery activities (Smith 2016). These figures are likely an undercount because states are not required to disclose whether or not they use inmate labor in emergency situations. It is unclear how long this practice has occurred. Emergency management within the field of corrections have noted that with a growing emphasis on detailed and comprehensive emergency planning, it is becoming more common for departments to fully recognize and document inmates as a potential resource should a disaster occur (Schwartz and Barry 2005).

When examining state emergency-management plans, I found that inmates are described as being responsible for at least 17 different emergency response and recovery tasks (Smith 2016). Some of these tasks are straightforward and reasonably safe, including cleaning up general debris and clearing roads, preparing sandbags to protect communities from flooding, and feeding people in the event of a mass-displacement. Others are much more dangerous, such as fighting wildfires, cleaning up hazardous materials spills, or helping with evacuations. Beyond what is listed in planning documents, scant research exists on the use of inmates in disaster, their training, the safety mechanisms for them or for the public, and whether the labor is voluntary, for instance. Anecdotally, we have seen examples in states like California where inmates comprise nearly 40 percent of the state’s wildfire-response force. In addition to wildfire operations, inmates have responded to earthquakes, hazardous materials spills, major transportation incidents, search and rescues, public health emergencies, flooding, as well as multi-casualty and terrorism incidents throughout states. Because of the expertise and skill level of the inmate strike teams, they often lead the response efforts for more than 350,000 total emergencies each year across the state (Brooker 2013). While California is the most famous, my results show that it is not unique in its practice of using inmate firefighters. My analysis reflected that at least 11 states across the United States include inmate firefighters in their emergency plans (Smith 2016). Other examples include inmates from Alaska receiving disaster assistance training to respond alongside local Community Emergency Response Teams (CERT 2010), and inmates in Louisiana assisting with flood preparation in response to hurricanes or flooding of the Mississippi River (Gaillard and Navizat 2012).

The practice of using inmates for emergency response raises numerous questions and presents challenges for both emergency management and inmate populations. First, inmates traditionally have represented a hazard within corrections as well as a potential threat to public safety. When inmates are at work within a community, security measures must be in place to prevent escape or any potential crime. Many questions remain as to how emergency management and corrections facilities are addressing these potential risks during a disaster situation.

This perception of inmates as dangerous also places inmates at risk. If inmates are perceived as dangerous they might not be given the resources necessary to survive a disaster. In the wake of Hurricane Katrina deputies fled the coming waters, but the inmates of Orleans Parish Prison (OPP) were deemed to be too dangerous to be let out of their cells, even if it meant the inmates might otherwise die (ACLU 2006). Within my analysis, 54 percent of state level plans referenced the potential danger and added risk posed by inmate populations. Research is needed to understand the implications of these perceptions for safety of the public and inmates.

Other researchers, however, have argued that emergency management should designate inmates as a vulnerable population in the context of a disaster (Robbins 2008; Hoffman 2009; Gaillard and Navizet 2012; Motanya and Valera 2016). Due to the nature of incarceration, inmates must fully rely upon corrections staff for their safety and protection. They are unable to evacuate to safer areas or access life-saving food or medical supplies on their own. Without adequate preparedness and planning, inmates are at great risk for negative health impacts or even death (Schwartz and Barry 2005). When inmates at the OPP were abandoned by deputies they were left locked in their cells, some in chest-high water contaminated by sewage. Without access to food, water, or medical care, prisoners broke windows and attempted to carve holes in the walls so that they could escape to safety. After days had passed, inmates were finally rescued (ACLU 2006). If inmates are seen as a vulnerable population whose rights and lives are worth protecting, rather than a dangerous population, prison officials and emergency management must extend to them the resources necessary to protect their lives and well-being. Within my analysis, 59 percent of states referenced the vulnerability of inmates in a disaster, but there was limited information on how that vulnerability translates into practice.

This vulnerability is further exacerbated by overcrowding. In 2014, 36 percent of state prison systems were determined to be “over-capacity,” while the national average rate of capacity remained at 98 percent. Facilities across the United States continue to house more inmates than their resources can adequately provide for and safely house (Bureau of Justice Statistics 2015). Overcrowding has been shown to create a dangerous and destructive environment detrimental to the health and safety of inmates (Haney 2006). One strategy to combat over-crowding is to allow inmates to earn an early release in exchange for providing labor for various work programs or projects. Nineteen states across the United States have implemented such programs, three of which (California, Colorado, and Louisiana) increase their rate of earned time credits for labor provided during a disaster (Lawrence 2009). As such, inmates may be more willing to accept risks to their health and safety to respond to a disaster in hopes of escaping the risks to their health and safety posed by over-burdened and stressed prison facilities. Inmates in Louisiana were given earned time off of their sentences in exchange for helping clean up the 2010 British Petroleum oil spill in the Gulf of Mexico. However, they were given only “flimsy coveralls and gloves” as protectants against the very serious health impacts of crude oil, that’s much less protectant than other workers wore (Thompson 2012: 43). This raises additional questions as to whether or not inmates are given the same caliber of training or resources to respond to disasters compared to traditional laborers and responders.

As our nation continues to grapple with the legacy of slavery and mass incarceration, the experiences of inmates in disasters are particularly relevant. The practice of inmate emergency response may serve as a reflection of just how entrenched the exploitation of inmate labor is within our society. If we can trust inmate populations to the extent that we rely upon them when we are most vulnerable, in the midst of catastrophe, shouldn’t they receive better care or potentially incur sentences that avoid imprisonment? Or will increasing disaster impacts further entrench and support mass incarceration, especially of less educated and low-income persons, who are often socially vulnerable in disaster situations?

California recently had to grapple with this issue after passing Proposition 47. This ballot initiative passed by California voters in November 2014 reduces the number of low-level, non-violent offenders in the state’s dangerously overcrowded prison system. Controversy ensued once it was understood that this policy would reduce the number of inmates available to combat wildfires. Kamala Harris, the state’s attorney general, said the program “would severely impact fire camp participation—a dangerous outcome while California is in the middle of a difficult fire season and severe drought” (“30 Percent” 2015). While California operates the most visible program relying upon inmate labor in disasters, the practice is common across most states. More research is needed to gain a comprehensive understanding of what better emergency management and criminal justice practices would look like.

As we work to reevaluate and reform our criminal justice system, the role and experiences of inmates in disasters must also be evaluated

Furthermore, we should include inmate labor in the costs of disasters, and consider how the use of this cheap labor is subsidizing the rising costs of disasters in the United States. As we work to reevaluate and reform our criminal justice system, the role and experiences of inmates in disasters must also be evaluated. We must assess how the experiences of inmates differs from that of traditional emergency response, and whether or not those differences place incarcerated persons at risk. Comprehensive data is needed to assess whether or not inmates participate voluntarily, as opposed to forcibly, across disaster response, what kind of training and resources they are given, as well as what protections are in place to prevent impacts to their health and safety. As public servants and emergency responders—who in any other situation would be considered the heroes of our society—we owe inmates resources and planning to ensure our emergency-management practices are saving lives, not making inmates more vulnerable in disaster.