Islands in the Storm 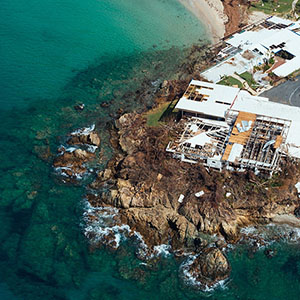 After a series of hurricanes wreaked havoc in late 2017, the Natural Hazards Center funded more than 30 proposals to conduct quick response research through its National Science Foundation-funded Quick Response Grant Program. The latest two reports in our series look at the impacts on two different populations on two different islands—children in Saint Thomas and healthcare workers in Puerto Rico. Read more about what researchers found in the following reports:

This study examined the outcomes of 109 students on the island of Saint Thomas after it was struck by two Category 5 hurricanes in September 2017. Three months after the hurricanes, participants were asked about their experiences during and after the hurricanes, their social support, coping strategies, and their current psychological functioning. Nearly half of the children reported moderate or severe levels of PTSD symptoms. Children who experienced more life-threatening experiences, but not loss-disruption experiences, were found to have more PTSD symptoms.

Social Vulnerability and the Role of Puerto Rico’s Healthcare Workers after Hurricane Maria
Skye Niles, University of Colorado Boulder and Santina Contreras, The Ohio State University
This study used interview and observation data with healthcare workers across Puerto Rico to better understand what kind of impacts the hurricane had on people’s health, and who was most impacted. The study sought to understand how healthcare workers responded to the crisis in order to reach communities in need and highlights how and why people with chronic health conditions, those who were economically disadvantaged, rural populations, and older populations were particularly vulnerable to the health impacts of the storm and massive, extended disruptions to key infrastructure.

Get more information other Quick Response Grant reports and learn about forthcoming research on our website.