The Case for Capitals

On May 30, 2014, a team of researchers from Rutgers University, New York University, and Columbia University conducted two focus groups with key stakeholders including residents, medical professionals, health department personnel, and community leaders to learn more about how people in New Jersey experienced post-disaster recovery from Superstorm Sandy in New Jersey. More than fifty people representing a variety of organizations attended the focus groups (Sandy Child and Family Health Study, 2014). Many groups, such as the American Red Cross and the Mental Health Association of New Jersey, were familiar with the team of academics. But some of the most vocal participants were from a new type of community-based organization called long-term recovery groups (LTRG). In the aftermath of Sandy these county-based organizations had organically become key players in leveraging post-disaster resources for affected residents. Many groups stayed in operation long after other government recovery programs ended.

LTRGs started off as groups of volunteers. However, they soon became active coalitions that included representatives from businesses, faith-based organizations, community non-profits, governmental agencies, and other unaffiliated citizens, which were able to facilitate millions of dollars to residents within their county (VOAD, 2012). Residents drew on each other and the formal help system, and were able to assist hundreds of families. LTRGs were pivotal in helping hundreds of residents recover from Sandy.

So how do we capture and capitalize on what they were able to do? What made these LTRGs different from other response organizations is their ability to turn local volunteers into advocates. The recovery groups exercised something called political capital—the capacity to mobilize, acquire, or exchange critical resources in this case after a disaster has depleted, disrupted, or destroyed them. While political capital is not explicitly limited to a disaster setting, by defining political capital in the context of disaster recovery and community resilience, and then exploring how it can operate at an individual and community level, we can understand LTRGs in New Jersey set an example that could serve many communities across the nation during recovery.

These recovery groups served as links between citizens and the formal government programs to improve disaster recovery with the assistance of Federal Emergency Management Agency’s Volunteer Agency Liaisons and the national Voluntary Organizations Active in Disaster (VOAD)1 program. The Ocean County LTRG, which is the last New Jersey LTRG still in operation, raised more than $7.1 million from the philanthropic community to support its work and rebuilding efforts (2015). In addition to providing housing assistance, LTRGs were also connected to the Mental Health Association of New Jersey and thus could refer people who needed support to additional services. Some county LTRGs transitioned into formal nonprofits, and LTRG volunteers and staff spent hundreds of days on the go; they visited people in affected communities, at their homes, or in local community centers, and kept tabs on the status of each recovery project. Members of the Atlantic County LTRG described to the research team in July 2015 some of the homes they were still working to get rebuilt. One home for example had been completely flooded by Sandy and needed to be raised on stilts due to new FEMA insurance regulations; however, the home owner was an elderly resident with mobility issues. The elevation meant she would need a ramp or a lift to access their home. LTRGs tapped specific state funding mechanisms for these residents and finally the home was to begin reconstruction.

Catastrophic events as severe as Superstorm Sandy can lead to significant and enduring health, economic, and social impacts on exposed populations. Political capital is one of four types of capital individuals can draw on in recovery from such an event. Table 1 (below) adapts Abramson et al’s resilience activation framework, which introduces these four distinct yet related capitals.2 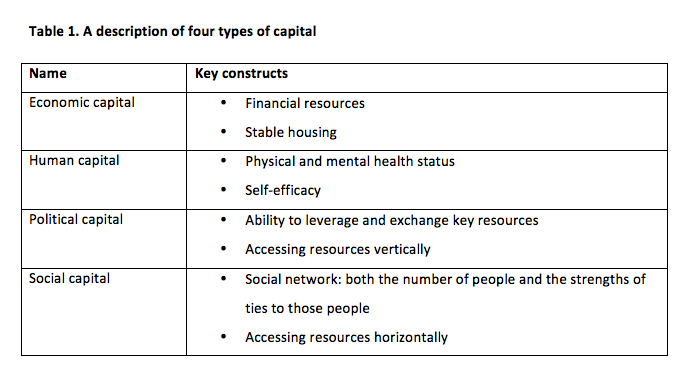 Many have heard of social capital, yet political capital is a new concept for the disaster community. Scholars, such as Daniel Aldrich (2012), have written about how social capital is necessary following a disaster. In Aldrich’s work social capital refers to the ties between neighbors or other community members that enhance recovery. He cites the recovery following the 1995 Kobe earthquake in Japan as an example of a close knit community that was able to minimize migration out of the disaster affected area and actively participate in rebuilding because of their close ties. Aldrich also suggests that individuals first turn to their neighbors for post-disaster assistance, before the formal help system—the local, state, and national agencies with the purse strings—and that this connectedness enhances citizens’ ability to recovery. Social capital therefore is the access to power and resources specifically from neighbors, informal organizations, or friends. On the other hand, political capital is the sustained interaction between government and these social networks. Drawing on social (people or resources around you) and political (people or resources typically out of reach in day to day life) capital highlights the necessity for individuals, and communities to connect with both each other and the formal help system to recover from disasters more effectively.

Political capital has been underexplored in the disaster literature. Understanding how it works through two additional examples can help individuals, practitioners, and researchers expand their thinking about post disaster recovery. One example at the community level occurred in Charleston, West Virginia, in January 2014. That’s when a Freedom Industries facility poured crude 4-methylcyclohexane methanol (MCHM)—an industrial chemical used in washing coal—into the Elk River near Charleston. It contaminated the drinking water of more than 300,000 people. Concerned citizens immediately sprang into action. Community groups such as People Concerned about Chemical Safety teamed up with local business owners in the affected towns. These local business owners had not been active in the political process and had never worked with local officials. Together they organized community meetings, which, in turn, led to meetings with public health officials, people from the mayor’s office, and even members of the state government to discuss the impact of the contamination on the health of residents. Before the community got more involved, members were confused by governmental plans to flush the chemical out of their water system. But with the help of the community members, a succinct flushing plan to clear out the chemical that was better understood by community residents was developed and implemented.3 Further, as a result of lobbying by residents and public health officials, the Centers for Disease Control and Prevention (CDC) is now considering long-term monitoring of this chemical and its health impacts on the residents of Charleston. Through the connectedness of residents and building a relationship with government officials, action was taken. This is again both social and political capital at work. 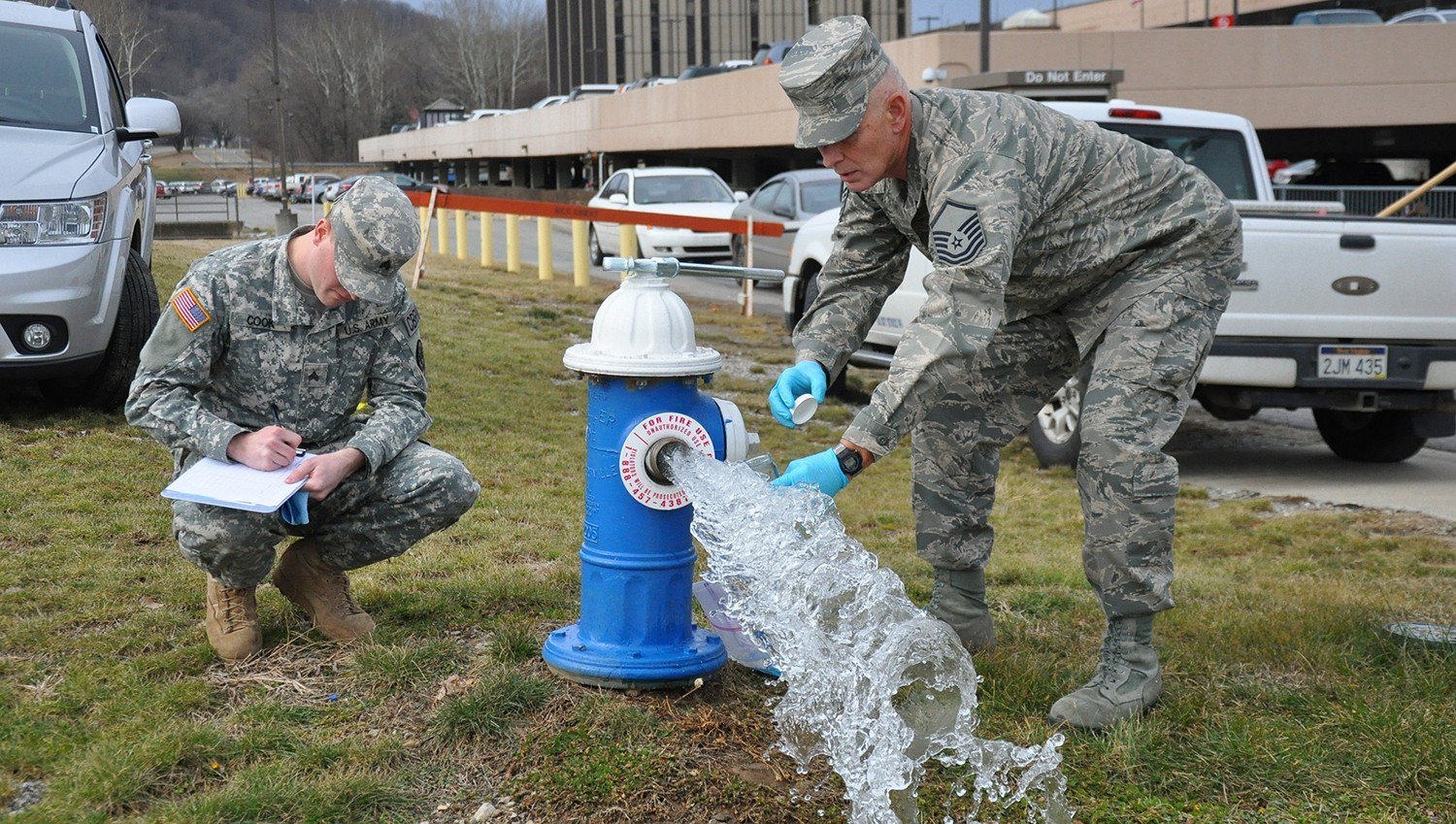 While the New Jersey and West Virginia examples demonstrate how political capital can work at the community level, it can also operate at the individual level. Consider the case of Flint, Michigan. A budgetary decision to switch drinking water sources from Lake Huron to the Flint River in April 2014 triggered widespread contamination of the water supply. The more corrosive Flint River water interacted with lead pipes, causing lead to leach into the water, resulting in extremely elevated levels of the heavy metal. As many as 8,000 children under the age of six were subsequently exposed to these dangerous levels of lead. For instance, Leanne Walters, a mother of four, noticed rashes, stunted growth, and other ailments in her children when they drank from the family’s water supply. She repeatedly contacted the local water supply and city government for answers. A local physician named Mona Hanna-Attish testified she had documented a dramatic increase in compromised health among children since 2014 when the water supply was switched.

Walters and Hanna-Attish together called attention to the lead content of the water supply.4 Both individuals are repeatedly cited by the media as igniting local citizens, leading to national concern, and federal involvement on the issue. These two women drew on their political capital to help illicit a national response to the water crisis in Flint. Although it likely took human capital in the strength of character of each person, and social capital to gain the support of other local residents, it was through their vertical reach to government, an exercise in political capital, change was able to be enacted.

Political capital is a newly defined concept for post-event recovery. Further research is needed into how it can specifically be operationalized and measured. Thinking about the capitals mentioned in this article—economic capital, human capital, political capital, and social capital—as distinct resources individuals can draw on in an adverse situation, allows citizens, practitioners, and researchers to design more nuanced interventions before and after disasters. For example, given the success of LTRGs, creating community committees that work with county governance in the event of a natural hazard may be valuable. Similarly, pre-establishing local residents that can serve as adverse event “consultant” to run formal risk-communication messaging can alleviate tensions and misunderstandings in an event. This approach can create a pre-established channel for the exercise of political capital. What these vignettes suggest is that formal governmental structure is a key resource that must often be utilized for post disaster recovery. How citizens and communities draw on political capital should continue to be considered and explored. With more attention to this distinct concept and how it relates to other drivers, communities and citizens can take individual or collective action to improve post disaster recovery.