Looking back over six decades of activity in the geographic field, I find . . . I made some contributions to structures of thought in a few fields [and] several efforts to alter relevant public policy. I undertook all of this activity in a spirit of trying to be helpful to needy fellow humans by cooperative, nonviolent methods.

In 2006, at the request of the Boulder City Council and Boulder City Manager, a Gilbert F. White Memorial Committee was established to design and implement a monument honoring Gilbert. The committee is made up of friends, family, colleagues, and students of Gilbert, as well as city staff.

The committee quickly agreed that Gilbert himself would probably have not wanted a memorial, but, that if one was deemed necessary, he would have wanted it to serve some practical, educational function. Hence, the committee decided on a memorial promoting flood hazard education in Boulder — a sculptural flood-height marker with accompanying signage and information about both Gilbert and the Boulder flood hazard.

The design of this beautiful sculpture is by Mary Bayard White (Gilbert's daughter) and Christian Muller (the designer and builder of Boulder's Sister City Plaza).

The marker is located alongside the Boulder Creek Path, between Arapahoe Avenue and Canyon Boulevard, just east of Broadway. 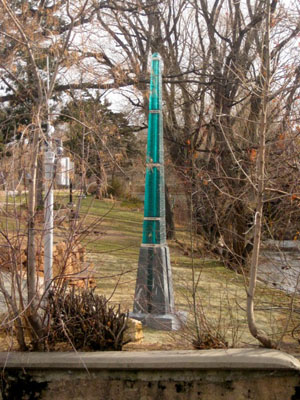 Between September 9 and September 13, 2013, almost 15 inches of rain fell in Boulder County, and Boulder Creek (as well as all the other drainages in the county) became a rushing torrent. At the height of the flood, water covered the granite base of the marker and reached the 50-year mark at the bottom of the glass column.