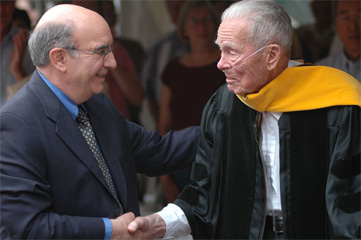 Each of us should ask what in his teaching and research is helping our fellow men strengthen their capacity to survive in a peaceful world.
—GFW 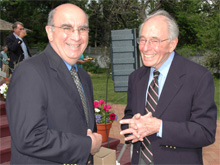 On May 17, 2006, at a special ceremony attended by many of his friends, colleagues, and students, Gilbert White received an Honorary Doctorate of Science from the University of Colorado. The degree was conferred by University Chancellor Philip P. DiStefano. Richard Jessor, Distinguished Professor of Behavioral Science and former Director of C.U.'s Institute of Behavioral Science, opened the proceedings with a tribute to Gilbert. Below are Jessor's and DiStefano's remarks.

Homage to Gilbert F. White Upon His Receiving an Honorary Doctor of Science Degree From the University of Colorado, May 17, 2006

I count it an honor and a rare privilege to have been asked to say a few words on this extraordinary occasion—the award of an honorary Doctor of Science degree to Gilbert White. I speak from the perspective of the Institute of Behavioral Science, which sought him out to serve as its Director some three and a half decades ago. I still recall—with undiminished chagrin—asking Gilbert, during his recruiting interview with me 37 years ago, in 1969, whether he was just coming to Colorado to retire! His gentle reply to such outrageous hubris on my part was that he had a full agenda ahead of him—and indeed he did! He subsequently led IBS into becoming one of the nation's leading research centers on problems of major societal concern. And he continued to transform his own field of geography and to shape the global response to natural hazards. But it was his calm and insightful understanding of my proprietary and protective concern about the future of IBS that signaled so much about the person who was to join us. It wasn't long before Gilbert became a treasured colleague, a friend, and a scientific and personal model for all of us in IBS. 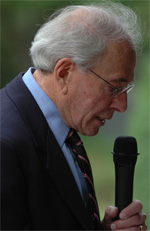 Gilbert's remarkable achievements, accomplishments, and recognitions in geography and behavioral science—the warrant for today's award of an Honorary Degree—will be noted by Chancellor DiStefano, and I leave that recital to him. I want to confine my own very brief remarks to Gilbert White the person, and to his way of being in the world, a way that, from the beginning, has informed his scientific work, shaped his impact on society, and characterized his relations with colleagues and students and friends.

The history of science, as Robert Merton's work in the sociology of science so clearly revealed for us, is replete with examples of competitive races for primacy of discovery, as if the true motivation for advancing knowledge were the glorification of the scientist. Other scientists have treated the scientific enterprise as a "game," one that is played against Nature, where the thrill and challenge derive from uncovering the recondite laws and principles that govern the natural and social worlds. And for still others, their scientific work is comprised of what Thomas Kuhn called "puzzle solving," the continuing accretion of new but fundamentally pedestrian bits of information that must await the second coming of a Newton or a Darwin or a Marx to make coherent sense of. None of these images captures the vision of scientific work that has animated Gilbert White's efforts across the decades. For Gilbert, the making of science has never been an end in itself. Instead, it has been his orientation that science has ultimately to be in the service of human betterment, that the scientist bears a deep responsibility to trace out and, indeed, to implement the application of new knowledge and understanding to improve the human condition. This way of being in the world of science is, unfortunately, not one that is widely shared, but it has threaded its way through all of Gilbert's scientific contributions. Here it is, in his own words, in an article on "Geography and Public Policy" written more than three decades ago: "I feel strongly that I should not go into research unless it promises results that would advance the aims of the people affected and unless I am prepared to take all practicable steps to help translate the results into action." There is something of the scientist-as-revolutionary in this outlook, and it is further evident in this cautionary comment to geographers that Gilbert made in that same article: "Let it not be said that geographers have become so habituated to talking about the world that they are reluctant to make themselves a vital instrument for changing the world."

As I watched Gilbert work over the years—both here in IBS and in weighty councils and committees across the globe—I often found myself in awe, and the psychologist in me sought to ferret out the origin of such an unusual way of being in the world of science and human affairs. Whatever the other influences on him—family, early childhood experiences, schooling—there is little question in my mind that his being a devout Quaker, and his having had a deep involvement in the American Friends Service Committee, have played a large part in forming his identity, his commitments, and his world view. Clearly, the Quaker philosophy—about the worth of every individual, about the indivisibility of the family of man, about the unacceptability of violence at all levels from personal to global, and about the incumbent obligation on all of us for socially responsible action—that philosophy illuminates the way that he has lived his life and made his mark. It is those values and that faith that have permeated his research, informed his efforts to change the world, and guided his everyday interactions with others.

(If I may be permitted an aside, would that those in today's centers of power, who glibly mouth the importance of values and faith could understand—as Gilbert does—the true meaning of such concepts as guides to humane and constructive action.)

Despite his characteristic humility and his reticence to acknowledge it, Gilbert has left his mark on the global environment and, indeed, has succeeded in changing the world. I select only one example from many because it best illustrates how his way of being in the world brought resolution to a hitherto intractable conflict, that over dividing the scarce water resources in the Middle East between Israel and Jordan and other interested parties. As Chair of the National Research Council's Committee on Sustainable Water Supplies for the Middle East, it was Gilbert's style of eliciting and respecting all viewpoints, of encouraging frank deliberations, and of setting a personal example of prudent social responsibility, that compelled the parties to reach a successful agreement.

Gilbert's everyday encounters with others, especially younger colleagues and students, are always characterized by an air of keen interest and respect and support. They unfailingly reflect what he once referred to as "the Quaker insistence on the sanctity of the individual." Truth be told, however, encounters with Gilbert are not always easy on one's ego—I've sometimes come away from spending time with Gilbert wondering why I wasn't a better person and why I couldn't be more like him! Indeed, it has been precisely his serving as a model that others have sought to emulate that accounts for so much of the influence Gilbert has exerted, both in science and in human affairs.

In these brief remarks, Gilbert White the person, rather than his scientific contributions, has been my focus, the Gilbert White we have admired, respected, tried to emulate, and loved over these many years together. In sum, I have tried to make the case that Gilbert deserves the encomium my grandmother taught me should be only sparingly used: In his scientific work, as in his everyday life, Gilbert White is truly a mensch!

Thank you very much!

Remarks by
Chancellor Philip P. DiStefano
Upon the Conferral of the Degree of Honorary Doctor of Science upon
Gilbert F. White
May 17, 2006

Distinguished Professor Emeritus Gilbert F. White is known worldwide as the "father of floodplain management" whose work in natural hazards changed the way people deal with nature and made the world safer for people to inhabit.

Professor White "is probably the single most distinguished and internationally recognized faculty member" at CU-Boulder, according to one nominator. His numerous awards include the nation's highest scientific honor, the National Medal of Science, the Tyler Prize for Environmental Achievement, the United Nation's Sasakawa International Environmental Prize, and the Association of American Geographer's Lifetime Achievement Award. 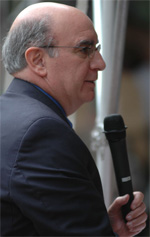 "The unifying thread throughout all of his years of inquiry and action has been a deep concern for the global environment and its relation to human well-being," according to more than 20 faculty nominators on campus.

When he studied the Mississippi River Basin for the federal government as a graduate student in the late 1930s, "People were very attracted by the notion that man could control nature to best serve his needs," he said. While other planners followed a flood-control policy based on the construction of dams, White questioned the impact of such projects and suggested alternatives. His doctoral dissertation has since been called the most influential ever written by an American geographer. "Floods are 'Acts of God,' but flood losses are largely acts of man," he wrote in 1942.

At the age of 34, White became president of Haverford College where he served from 1946 until 1955. He taught at the University of Chicago from 1956 to 1969. He was a visiting professor at Oxford University in 1962-63 and chair of the American Friends Service Committee from 1963 to 1969. White joined the CU-Boulder faculty in 1970 as a professor of geography and Director of the Institute of Behavioral Science. He has served as the Gustavson Distinguished Professor Emeritus of Geography since 1980.

In the early 1970s, Gilbert was one of the principal investigators in a major National Science Foundation-funded assessment of the status of natural hazards research in the United States. He subsequently founded CU's Natural Hazards Research and Applications Information Center in 1976, the nation's leading repository of knowledge on human behavior in disasters.

Gilbert has also made major contributions to the study of water systems in developing countries, global environmental change, international cooperation, nuclear winter, geography education, and the mitigation of all types of natural hazards including earthquakes, hurricanes, and drought.

In 1994, Gilbert created the Boulder Creek Flood Notebook, an on-line plan for studying the next great flood to strike Boulder—both the effects of such a catastrophe and the decisions that made it possible. He has also contributed funds to support that research when it occurs.

In 2001 Gilbert donated his research library and personal papers to the U.S. Army Corps of Engineers. The collection, considered one of the largest in the world on water resources planning, is now housed in the Arthur Maass - Gilbert F. White Reference Room at the Corps' Institute for Water Resources in Alexandria, Virginia.

"Across the seven decades of his enormously productive professional career, Gilbert White has reshaped his own discipline of geography and, at the same time, has helped to reshape the lives of people, especially the poor and the weak, in countries around the world—from the Tennessee Valley Authority to the Mekong Delta, and from the Aswan Dam to the Jordan River in the Middle East," said the nominators.

The Board of Regents is pleased to award the degree of Doctor of Science, honoris causa, to Gilbert F. White in recognition of his exceptional intellectual contributions, service to the university, and service to humanity.

Thank you, Gilbert, and congratulations on this well-deserved honor! 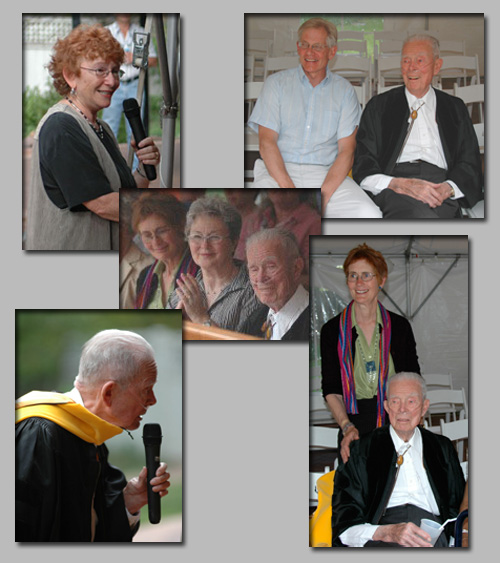