PET PODs: Including Pets in Your Community Evacuation Shelter Plan

The unwillingness to abandon pets can lead people to choose not to evacuate in disasters. Accommodating pets in shelters can help encourage evacuation and can provide psychological support to shelter inhabitants during the stress of being displaced.

Making the choice to evacuate the comforts of home during a disaster can be daunting—and even more so if you are forced to leave your pets behind. Among the best-case scenarios would be the ability to evacuate with your pet, knowing you could provide care and comfort as needed.

Wake County Emergency Management in North Carolina has created a system to allow just that. We have long used a system of pods—large, portable storage containers—to deploy supplies to evacuation shelters and so we developed “PET PODs” based on the same concept. Since having plans and supplies in place before disaster strikes is the best way to ensure pets are accommodated at evacuation shelters, in 2015 we designed, stocked, and developed standard operating procedures for PET PODs and incorporated their deployment into the plan for opening evacuation shelters.

Based on research conducted following Hurricane Katrina, we know people are more likely to seek shelter when they know pets are welcome too. Pets help with depression, anxiety, and stress—all of which can be associated with disasters. By including pets, shelters can positively impact the mental health of the pet owners staying at an evacuation shelter. 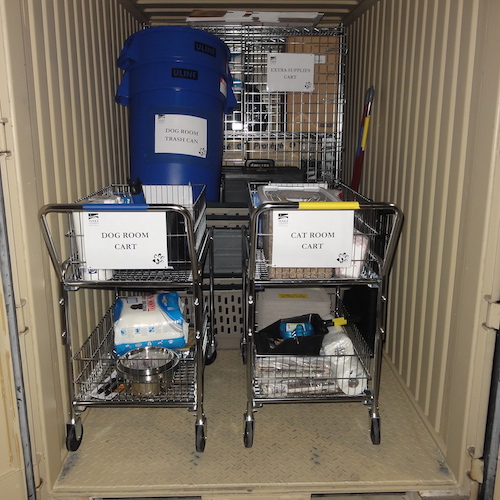 The Pets Evacuation and Transportation Standards (PETS) Act, which amended the Robert T. Stafford Disaster Relief and Emergency Assistance Act, mandates that state and local emergency preparedness operational plans include provisions for individuals with household pets and service animals following a major disaster or emergency. It doesn’t, however, clearly delineate how such provisions should be implemented or funded. While events that garner headlines bring in support from national organizations such as the American Society for the Prevention of Cruelty to Animals or the Humane Society of the United States, many more events occur at the local level and it’s up to local agencies to respond.

In our case, the county-operated animal shelter worked with the emergency preparedness department to develop PET PODs, which laid a foundation for our evacuation shelters to accommodate pets and ensure high-quality animal welfare.

Each PET POD contains the supplies needed to set up a pet section within the shelter, conduct the intake of animals, and sustain pets during their stay. Inside, each PET POD is divided into three distinct sections with supplies for dogs, cats, and the shelter workers who will operate the pet section—including instructions, resources, and record-keeping tools to ensure everyone is reunited after the emergency ends.

Wake County’s first major use of PET PODs came in 2018, when local evacuation shelters hosted 90 animals during the fallout from Hurricane Florence. Although PET PODs were only equipped with supplies for cats and dogs, other pets were also welcome at the shelter. The PETS Act defines “household pet” as a domesticated animal, such as a dog, bird, rabbit, rodent, or turtle, that is traditionally kept in the home for pleasure rather than for commercial purposes, can travel in commercial carriers, and be housed in temporary facilities. In our interpretation and planning, it was determined that dogs and cats would likely be the primary occupants and most likely would not be brought in suitable crates for long-term housing. However, reptiles, bird, or small mammals—such as hamsters, guinea pigs, and rats—were also admitted but only with the appropriate housing.

For public safety purposes, our emergency evacuation shelters reserved the right to ask owners to remove any pet they were unwilling or unable to reasonably control. Wake County had determined it could not shelter farm animals, wildlife, venomous snakes, constrictor-type snakes, primates of any kind, or any “inherently dangerous animals,” such as big cats or bears. For the species of pets allowed in the shelter, there were no breed restrictions.

For many people, pets are family. To know that your “family” is nearby and that you can care for them daily eases one major stress of evacuation. Pet owners were responsible for the daily care of their animals, so they had to reside at the same evacuation shelter as their pets. Keeping owners close to their pets also reduced the chance of abandonment or accidental separation of owners and animals. Although pets were not allowed in the human section of the shelter, owners could visit the pet section as often as they would like during hours of operation. Dog owners could take their dogs out for as many walks as they wanted to during the day. The pet owners during Hurricane Florence spent a great deal of time with their pets.

Daily care requirements were outlined for owners in the standard operating procedure. They include walking dogs, cleaning up crates, and providing ample food and water. Litter scoops for cats, poop bags for dogs, cleaning products, and gloves were included in PET PODs supplies. Owners had to bring their own pet food, and if they did not have food available, a request was sent to the emergency operations center. During Hurricane Florence, pet food donations were accepted.

At night check, shelter staff ensured each animal had water and a clean crate. If not, pet owners were called to care for their animals. At 10 p.m., lights were turned off to allow the pets time to rest, which can help reduce animals’ stress levels while being housed in an evacuation shelter. The pet section of the shelter reopened each morning at 8 a.m.

Local emergency preparation for pets should start with a collaboration between the local emergency management agency and the local government animal shelter. Local agencies can use the PET PODs concept to prepare for potential disasters, and the pods can be sized to suit their community’s needs.

During Hurricane Florence, all pets stayed united with their owners, no animals were abandoned at the shelter, and no bites or other negative situations occurred at Wake County evacuation shelters. With prior planning and preparation of PET PODs, other communities can experience these same positive outcomes.