Aim for Two, Plan for Four

Why We Need to Broaden our Adaptation Goals 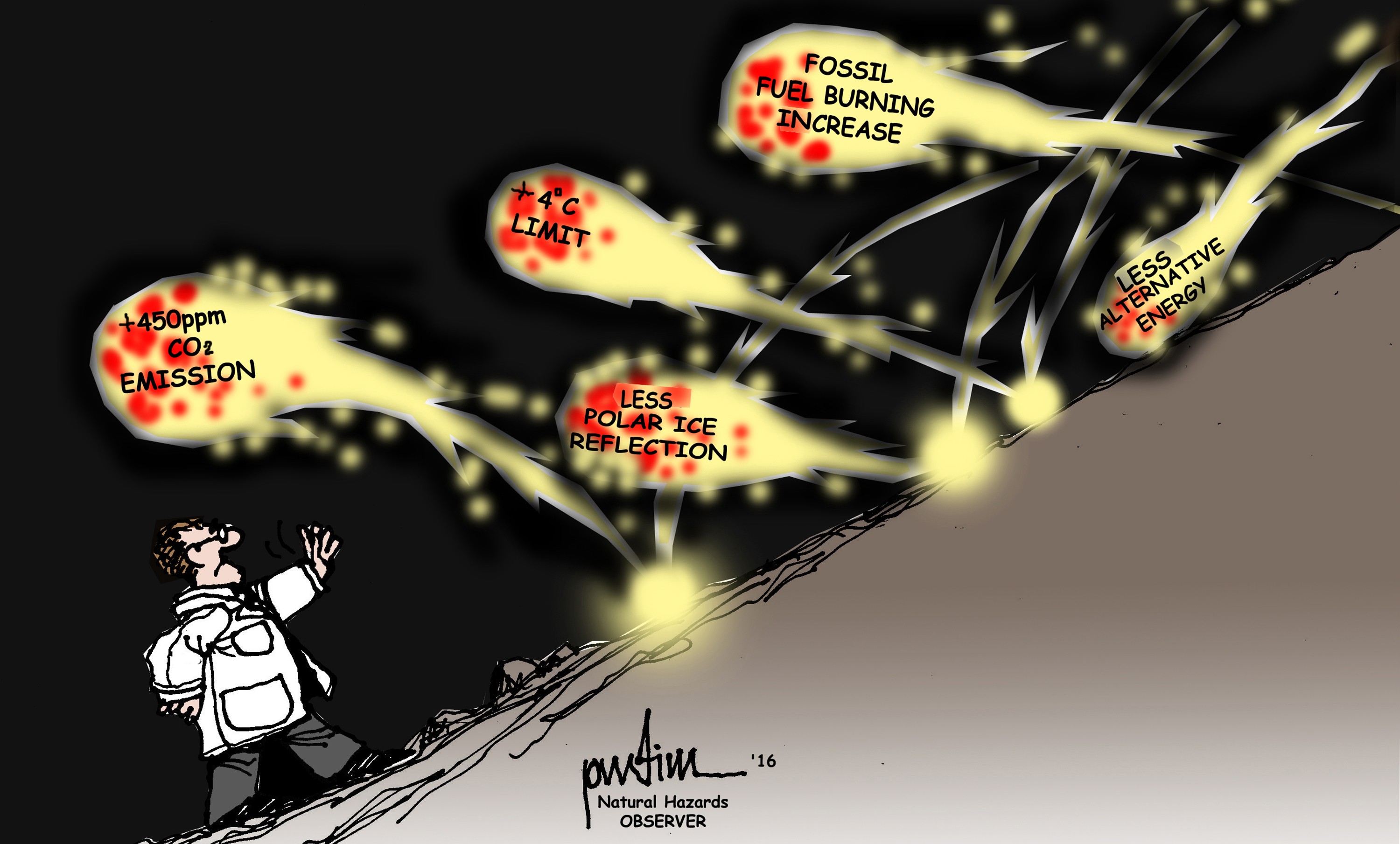 IN DECEMBER international leaders met in Paris at the United Nations Climate Change Conference (UNFCCC) during the twenty-first “Conference of Parties” (COP21) with the goal to “achieve a legally binding and universal agreement on climate, with the aim of keeping global warming below 2°C above preindustrial temperatures”(COP21, 2016). Delegates discussed and agreed on national targets, but simple math reveals a harsh truth— if we manage to hit the targets agreed upon in Paris we will still experience a dangerous 2.7°C - 3°C warming above pre-industrial levels by 2100. While these numbers appear small, climate-adaptation practitioners understand the implications are anything but. Somewhat ironically, at the same UN Conference of Parties, there was also collective agreement that the upper limit of warming should be revised downward to 1.5°C because, “The 1.5 degree Celsius limit is a significantly safer defense line against the worst impacts of a changing climate” (UNFCCC, 2016).

This ratcheting down of the temperature target speaks volumes about the predicament we’re in. Changes are occurring faster than we anticipated and we continue approaching blind curves at high speed.

I began working on climate change eight years ago. As my understanding of the issue deepens and I watch national and international efforts come up short year after year, I have to wonder if our climate adaptation sights are aimed at the wrong target.

I have had the fortune of working on climate mitigation and adaptation while serving as the Climate and Energy Analyst for the City of Eugene, Oregon. During this time I have come to a few realizations that have fueled my growing concern. First, the greenhouse gas-emissions reductions that are scientifically necessary appear to be all but unachievable. Second, scientists anticipate that as we move beyond 2°C of warming, there is a dramatic increase in the risk of rapid warming magnified by naturally occurring feedbacks within the climate system—sometimes referred to as “runaway” climate change. Finally, and perhaps most troubling, our current climate adaptation efforts are focused on a future stable climate condition that appears highly unlikely.

First, the emissions challenge. I recently have been tasked with developing a greenhouse gas-reduction target for Eugene that is consistent with returning global concentrations of CO₂ to 350 parts per million (ppm), the CO₂ level climate scientists tell us is least likely to trigger runaway global heating. It should be noted that global CO₂ concentrations surpassed 400 ppm nearly a year ago for the first time in recorded history, so a 350ppm target is extremely ambitious. We found that doing our share to meet 350ppm means we must stop emitting CO₂ within 15 years (Hansen et al 2015). For comparison, we looked at what would be needed to achieve 450ppm (the number expected to limit warming to 2°C). While more feasible perhaps, getting to 450ppm would still require emissions to drop from today’s levels to almost zero within 35 years. While this may be technically possible, our climate-mitigation goals and actions in Eugene, and across most of the country, are not geared to achieve this scale of reductions. I hold on to hope that we will find the will to achieve these levels of reductions, but I do not believe it is responsible to assume these dramatic emissions reductions as a basis for climate adaptation planning. As climate-adaptation practitioners, we are trying to reduce risks posed by climate impacts, so we should be planning for likely outcomes, not banking on the best possible scenario.

The second lesson I have learned is that there are feedbacks in our climate system that have a huge potential to increase global temperatures. A great example is the Arctic ice sheet at the top of the planet. Like a giant mirror, the white surface of the sea ice reflects most of the incoming sunlight back into space. As warming causes the ice to recede, it is replaced by dark ocean waters, which absorb the light energy, turning it into heat energy, increasing warming and further melting the ice in a self-reinforcing loop. The trouble is that several such natural feedbacks exist within the climate system and when combined they have great potential to cause extreme warming. Unfortunately, because we don’t know exactly when these feedbacks will kick in, they are not always accounted for in climate models, meaning that we are likely to significantly underestimate the potential speed of warming. These feedbacks are one of the reasons we have set an international goal to stay below 2°C of warming—because somewhere at or beyond that temperature, the feedbacks are unleashed and, like it or not, we find ourselves on an uncontrollable escalator to dramatically warmer temperatures. We are currently experiencing 1°C of warming, and total global greenhouse gas emissions continue to increase every year

My third realization is that the majority of our climate-adaptation plans focus on a 2°C warming scenario that stabilizes at 2°C and doesn’t warm further. In reality, climate is rarely stable. Over the last 800,000 years the average temperature of the globe has jumped up and down like a heartbeat. This fluctuation has been cyclic and driven by natural processes, but if we look into Earth’s climate history there is an odd stabilization of temperatures that began some 10,000 years ago. As a species we have benefitted immensely from this unusual period of relative climatic stability; it has encouraged long-term settlement along our coastlines and it has enabled development of wildly successful agricultural practices. How will we adapt as we enter a period of climatic conditions that are far less predictable and far more dynamic than our recent history has prepared us for? While I hope we can find a way to limit warming to 2°C and avoid unleashing feedbacks, good risk management suggests we should anticipate and prepare for less rosy outcomes. I believe we should re-calibrate our adaptation efforts to anticipate 4°C and continued warming. I will be first to acknowledge that 4°C of warming and an unstable climate is increasingly difficult to “adapt” to, but planning for a more moderate level of impacts just because it feels less overwhelming is not the basis of good risk management.

In 2011 an international team of scientists provided a clue about the potential impact of four degrees of warming (New et. al, 2011). They note, “Even with strong political will, the chances of shifting the global energy system fast enough to avoid 2°C are slim. Trajectories that result in eventual temperature rises of 3°C or 4°C are much more likely, and the implications of these larger temperature changes require serious consideration.” As for the impacts, the authors raise the concern, “The continued failure of the parties to the UNFCCC to agree on emissions reductions means that those planning adaptation responses have to consider a wider range of possible futures, with a poorly defined upper bound. Second, responses that might be most appropriate for a 2°C world may be maladaptive in a +4°C world; this is, particularly, an issue for decisions with a long lifetime, which have to be made before there is greater clarity on the amount of climate change that will be experienced. For some of the more vulnerable regions, a +4°C world may require a complete transformation in many aspects of society, rather than adaptation of existing activities.”

As adaptation professionals we haven’t had a discussion about adapting to higher temperatures. The good thing is that many of the efforts I imagine we might employ to “adapt” to 4°C are also desperately needed today and would help us manage 2°C of warming as well. What do those strategies look like? How would we implement them? I propose that in addition to (or perhaps instead of) focusing on structural adaptation like building sea walls, we might also focus on supporting social adaptation that would both help our communities to navigate uncertainty and disruptions in the future and help us address the challenges of today.

"For some of the more vulnerable regions, a +4°C world may require a complete transformation in many aspects of society, rather than adaptation of existing activities”

This could involve boosting psychological resilience through workshops that improve mental coping skills. The Resource Innovation Group, for example, has hosted workshops in several cities including Eugene. They are teaching people useful skills in mindfulness, meditation and trauma management to help people cope with the stresses they’re experiencing today – and to spread habits that could help us all handle the curveballs of tomorrow.

Adapting to four degrees might involve promoting community cohesion by better bridging the racial, cultural, and economic divides in our communities. In his book Heatwave, Eric Klinenberg writes of a deadly spell of extreme heat in Chicago in 1995. With scientific rigor he investigates the horrible event, comparing neighborhoods full of survivors with neighborhoods that didn’t fare as well. He found the secret to survival wasn’t wealth, mobility, or access to health care, it was the presence of healthy social bonds. Those residents who lived in socially connected neighborhoods fared significantly better than those living in socially isolated environments. For this reason, it seems improving social cohesion within our communities should be one of our adaptation goals.

If more frequent curveballs are in our future, perhaps we should also take measures now to enhance the transparency and particularly the nimbleness of our government decision-making. I have seen with my own eyes that making decisions on behalf of the whole is way easier said than done, but organizations like the Co-Intelligence Institute and Healthy Democracy work tirelessly to test and share examples of better collective decision-making practices. It seems self-evident that our communities will manage tough decisions better when residents are involved and genuinely understand the difficult dilemmas placed at our collective doorstep.

I certainly don’t have all the answers, but I hope we might focus our attention on a broader range of climate possibilities that are more challenging than 2°C, and unfortunately, increasingly likely.

New et al. 2011. Four degrees and beyond: the potential for a global temperature increase of four degrees and its implications. Philosophical Transactions of The Royal Society, A 2011.