Canadian Fire Makes a Case for a New Normal in Disasters 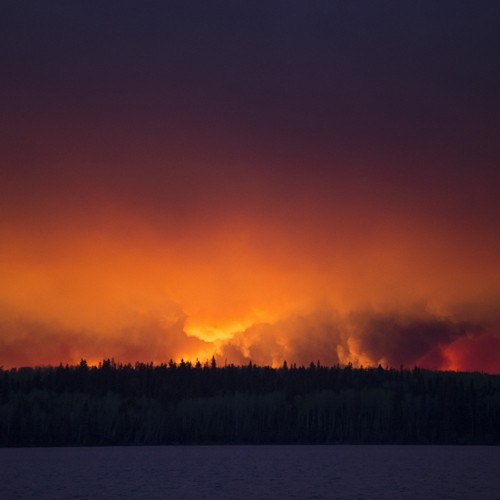 ©Premier of Alberta. A massive wildfire rages May 4, 2016, southwest of Fort McMurray in Alberta.

Unusually hot weather and dry conditions have left northern Canada in the grip of a mammoth 210,000-acre wildfire this week. The fire—which grew from a 3,000-acre blaze on Sunday—engulfed the town of Fort McMurray, sparked the evacuation of 88,000 people, and shut down about 15 percent of the country’s crude oil production.

But beyond the devastation wrought in the remote region of Alberta, the fire provides a snapshot of what firefighters and emergency managers can expect to face in a new era of climate-induced wildfire.

The fire, which was possibly caused by a lightening strike, started north of Fort McMurray on Sunday, according to the New York Times. By Tuesday, however, shifting winds pushed the flames toward the town, causing authorities to issue an evacuation order for entire population.

Residents were forced to flee along the Highway 63—the only road leading into and out of the isolated town—which was soon congested. Limited gas supplies and extremely slow travel speeds left many marooned on the smoke-filled roads. Evacuee accounts and images and video from the scene painted a terrifying picture of stranded vehicles and people caught in what they described as Armageddon-like conditions.

“It was something out of a movie,” Erica Decker told the Guardian Thursday. “It was absolutely apocalyptic, there were vehicles stranded everywhere, the sky was black and orange, there were—and are still—so many people trapped.”

Regardless of the hair-raising situation, everyone was evacuated and there were no fire-related injuries, according to emergency officials (although two people died in a car crash while evacuating).

By Friday, however, the fire had grown to eight times the size it had been at the time the town was cleared and was creating its own weather system. The escalating conditions caused an emergency operations post to move three times and warranted the re-evacuation of about 25,000 residents who had been lodged temporarily at oil sands work camps to the north of the city.

Although as of Thursday, there were more than 1,110 firefighters, 145 helicopters, 138 pieces of heavy equipment and 22 air tankers fighting fires in the province, according to the Guardian, fire officials said there was no end to the blaze in sight.

“Let me be clear: air tankers are not going to stop this fire,” Chad Morrison, Alberta’s manager of wildfire prevention, told the Guardian on Friday. “It is going to continue to push through these dry conditions until we actually get some significant rain.”

Warmer weather and a drier climate are increasingly lengthening wildfire season, making situations like the one in Alberta more common in Canada and the United States.

“What’s happening in Fort McMurray is a perfect encapsulation of the wicked ways that climate change is impacting wildfire season,” Brian Kahn wrote in a Climate Central article Wednesday. “A drier than normal winter left a paltry spring snowpack, which was quickly eaten away by warm temperatures. That left plenty of fuel on the ground for wildfires to consume.”

Budget constraints, disagreements about how to manage wildfire, and more people living in the wildland-urban interface have exacerbated the problem. Political opinions about the impacts of climate change haven’t helped, either.

“One thing we know is that with climate change there will be more extreme events,” said Canadian Prime Minister Justin Trudeau told the Guardian. “But, we know very well that placing a direct link between any fire or a flood and climate change goes a step beyond what is helpful and does not benefit a conversation we must have.”

Many would disagree. While scientists stop short of attributing single events to human-caused climate change, denying its role in the disaster is also unhelpful. And until the public is able to connect catastrophic events like the Fort McMurray fire with a changing climate, little will get done to stanch the problem or prepare for its consequences.

“This is the other side of thinking about Fort McMurray’s terrible loss in terms of climate change,” wrote John Geddes in an opinion piece for McClean’s. It’s not just a matter of the disaster serving as a reminder of the case for serious measures to combat global warming. It’s also about what we will have no choice but to start doing, and doing at significant cost, if those efforts fail.”