Damage from the November 30, 2018, Anchorage Earthquake is shown in a photo from the EERI event clearinghouse. Photos are one of many resources collected by VERT volunteers. ©Patrick Murran, SOM, 2018.

Within hours of a disaster, the Earthquake Engineering Research Institute (EERI) can deploy a team of investigators from around the world to collect information ranging from the general characteristics of the event to the specifics of how a particular school was affected. And they never have to leave their desk. 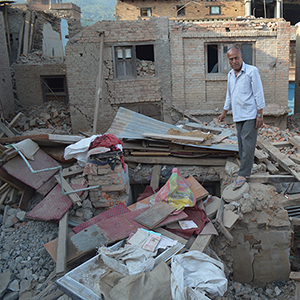 A man stands by the reamains of his home in a photo from EERI's 2015 Nepal Earthquake photo gallery. The nearly 7,000-photo archive was put together by an early iteration of VERT. ©Ganesh Kumar Jimee, 2015.

This is VERT—the Virtual Earthquake Reconnaissance Team—a group of mostly new professionals and students that work remotely to apprise decisions being made on the ground.

“It’s like drinking from a firehose after one of these events,” said Erica Fischer, a civil and construction engineering professor at Oregon State University and co-chair of VERT. “The goal is to inform reconnaissance teams. That way their time in the field is more valuable.”

Virtual reconnaissance isn’t necessarily a new concept, Fischer said, but there are several ways that VERT is moving in new directions. One of those is by streamlining the method for bringing together teams and collecting information, so that members are able to activate quickly, coordinate with each other effectively, and collect data consistently.

For instance, when a magnitude 7.0 earthquake struck near Anchorage, Alaska, on the morning of November 30, VERT issued a call to gather data. By that afternoon, 30 of the group’s 150 members where compiling information in topic areas that included lifeline performance, emergency response, tsunami warnings, hospitals, geotechnical damage, transportation networks, schools, and housing.

The data is collected from a wide swath of information sources—official documents, news reports, social media, and on-the-ground reports from other EERI members. With two or three people collecting data in standardized topic areas, the team assures output that can later be used across different disaster events.

“Reconnaissance is what happened,” Fischer said. “This lets us document what happened in a systematic way and see what’s next. If we’re not systematically collecting data every time, how can we compare it to what we learned before?”

Along with being consistent, the process is quick. By December 3, the Anchorage team had produced a 71-page report that’s a one-stop shop for the nitty gritty on the Anchorage quake. The format of the report—a series of simple presentation slides—isn’t meant to be fancy, just easy to use.

“Our whole purpose is to provide a lot of information in one location, so it’s easily digestible,” Fischer said. “This is getting that information out there so that informed decisions can take place.”

Once that preliminary content is released, though, the team still has plenty of work to do. They’ll be active through a number of phases where they’ll assemble narrower datasets based on the needs of reconnaissance teams and others that need information. Returning to the Anchorage case, for example, the team has been able to help the U.S. Geological Survey scope the effectiveness of their earthquake safety communications.

“They were really interested in how people were physically reacting to the earthquake,” Fischer said. “Did they drop, cover, and hold on? How did they react?”

To that end, VERT members assisted in getting footage from closed-circuit cameras to find out. Similarly, they’re compiling a catalog of damaged businesses in the area that could be used by those interested in business resiliency. Eventually, about a year out from the event, the team will put together a final review to highlight the lessons of the recon efforts.

The trajectory of the program has grown since Fischer, along with co-chair Manny Hakhamaneshi of the California Department of Transportation, formalized it from its ad-hoc beginnings in 2016. Then, it was an effective vehicle to help early career professionals and students gain hard-to-get experience in reconnaissance work and support EERI’s Learning from Earthquakes project.

While the program still serves that role, more recently it’s grown to encompass increased offerings and collaborations—such as a recent partnership with the Structural Extreme Event Reconnaissance Network (StEER)—and there’s more on the horizon.

That’s good news for everyone, because as Fischer points out, reconnaissance fieldwork is necessary to ensure built environments are compatible with human environments.

“When a building is damaged, it doesn’t happen in a vacuum,” she said. “It’s damaged in the context of community. You can’t model an entire community in a laboratory.”