Drought can impact communities in many ways, such as drying up Radium Springs, a popular tourist attraction in Albany, Georgia. Photo Credit: Alan Cressler/USGS, 2016.

When it comes to natural disasters, it’s tough to beat drought as a threat multiplier. The insidious hazard creates conditions that underlie and exacerbate many others—wildfire, heatwaves, food scarcity, and even seemingly contrary events like flooding.

To make matters worse, drought often escapes the notice of the public, policymakers, and even planners until it becomes extreme and impacts other systems.

“Unfortunately, there’s not a lot of attention paid to cascading disasters and cascading impacts,” said Shannon Burke, manager of the American Planning Association’s Hazards Planning Center. “We have to make sure planners think about drought and think about it in the context of other hazards.”

Because planners play a key role in helping communities build resilience to drought and other hazards, the APA has undertaken a big push to help incorporate drought mitigation planning into a multi-hazards context. As part of that effort though, the group uncovered another issue—lack of funding to address it.

The APA, along with partners at the National Drought Mitigation Center, conducted a survey of nearly 2,000 planning professionals to learn what challenges they faced in addressing drought risks in their communities. Among other insights, responses to the survey indicated that about 80 percent identified limited funding as either a moderate or significant obstacle to effectively dealing with drought. The problem ranked as the biggest barrier with a dearth of staffing and the lack of coordination with other organizations trailing close behind.

The good news is that there are funding mechanisms available to help communities better plan for and respond to drought—they just might not be apparent. 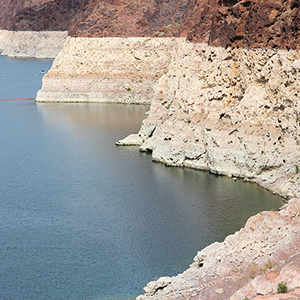 For instance, many projects covered under flood mitigation—such as floodplain restoration, floodwater diversion, and wetland reclamation—can also provide adequate protection against drought impacts by helping recharge groundwater supplies and creating a natural storage during times when there’s too much water. The Federal Emergency Management Agency often funds such efforts under its suite of mitigation grant programs, soon to be bundled in the new and better-supported Building Resilient Infrastructure and Communities (BRIC) initiative.

The U.S. Bureau of Reclamation, too, has several programs for helping communities both plan for drought and implement mitigation projects. The bureau’s WaterSmart program offers grants for a number of activities that can help allay drought impacts and strategize efficient water use during times of drought. These can be especially helpful because they allow projects to be implemented on local and regional scales, although the mission of the bureau—which is mainly focused on reclaiming water in the U.S. West—can impose limitations.

Outside of grant funding, many other financing ideas and resources are available for those willing to get creative. One of the positive aspects of the cascading impacts of drought is that drought planning can often be tied to its impacts—socio-economics and health, for instance—allowing additional resources to be applied.

Because these areas impact the public and private sectors, there might be willingness to leverage funds for drought mitigation and conservation projects that aren’t otherwise earmarked as such. The U.S. Environmental Protection Agency’s Water Infrastructure and Resiliency Finance Center works to help local decisionmakers understand what sort of mechanisms might be available to their communities, whether they are private, state-funded, federal, or otherwise.

For planners and others charged with protecting their communities against drought, inventive pathways to funding can be difficult and is far from the only barrier to implementing effective solutions. But just as drought encroaches on every aspect of community safety, so do resolutions. Efforts like those of the APA Hazards Planning Center can go a long way toward helping connect the dots.

“There is still so much planners need,” Burke said. “There’s still so much to do. But great strides have been made to get this information out there. You just have to think about everything holistically.”