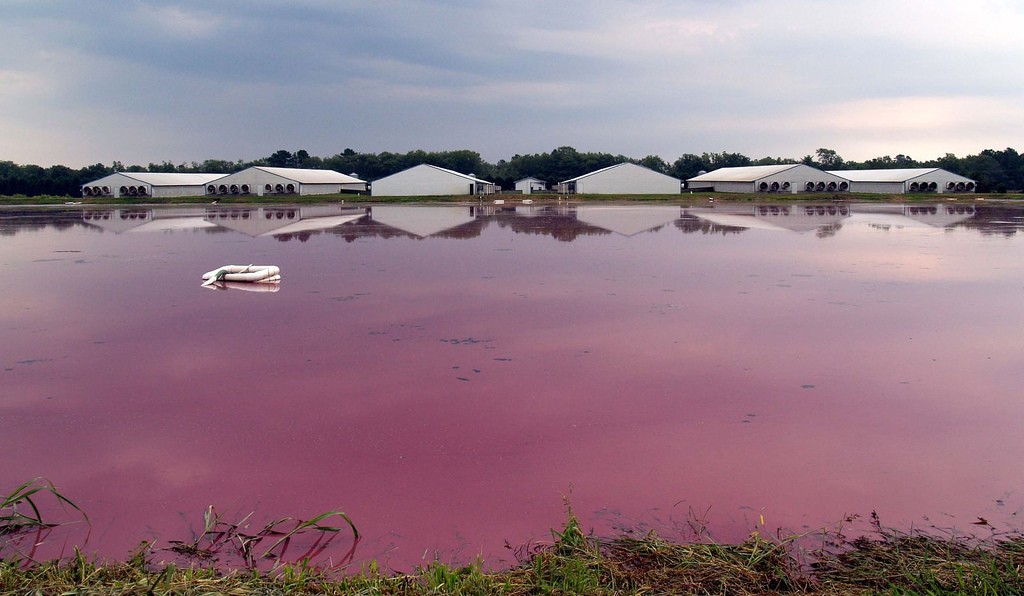 As North Carolina recovers from the widespread destruction and catastrophic loss of life caused by Hurricane Matthew, state officials are taking steps to contain another—and potentially even more deadly—disaster.

Flooding triggered by Matthew killed an estimated 1.7 million chickens, 112,000 turkeys, and 2,800 hogs and caused at least 16 giant lagoons of hog waste to overflow and two to breach. As a result, fecal matter—which often contains parasites and bacteria such as E. coli and salmonella—and equally harmful carcass fluids have seeped into flows and streams, creating a serious public health hazard. There are fears that this waste will contaminate ground water—a primary drinking water source for many North Carolinians—and damage fragile ecosystems. In an attempt to get ahead of the looming crisis, state officials are collecting samples to test water quality and are closely monitoring the disposal of dead animals.

With more than 2,000 industrial hog farms and an estimated 10 million hogs, North Carolina is one of the country’s prime hog producers. Together these farms produce an astonishing 20 million tons of manure per year.

To handle all this waste, farmers in North Carolina use the so-called lagoon and spray field system. Their hog barns are fitted with slatted floors. Manure drops through the slats into pits beneath the barns. Whenever these pits fill up, farmers flush the manure to lagoons, large earthen pools, where microbes decompose the waste. Farmers then spray the watered down manure on nearby fields, which keeps the liquid in the lagoon at a manageable level and adds nutrients, such as nitrogen and phosphorus, to the crops. Those nutrients, however, are only beneficial in small doses. Too much can cause harmful algae bloom and fish kill.

The lagoon and spray field system causes a horrid odor, and gives off ammonia, methane, and hydrogen sulfide fumes. These pollutants can cause myriad health problems, according to Steve Wing, an epidemiologist at the University of North Carolina at Chapel Hill. His 2012 research on the local health effects of very large hog farms found acute physical symptoms North Carolina residents who live near the farms experience include eye irritation, wheezing, chest tightness, shortness of breath, sore throat and nausea.

And all of this happens on a good day. Throw a devastating hurricane in the mix and the health hazards increase exponentially. Lagoons, while a cheap way to deal with massive amounts of hog waste, are prone to spilling over during adverse weather.

Matthew was certainly not the first hurricane that caused water supply contamination in North Carolina. During Hurricane Floyd in 1999, 50 lagoons, many of which were located in the floodplain, flooded and six ruptured. Millions of gallons of manure were subsequently released into rivers and flows. In addition, 28,000 hogs and nearly three million poultry were killed.

To get rid of all these carcasses, most affected livestock producers chose to bury dead animals on their own land. At the time, this option was preferred—farmers were even offered a financial incentive to do so—because it would minimize transport of animal carcasses and the spread of health risks. Unfortunately, though, it created other environmental concerns. Farmers ended up burying animals in grounds saturated with standing water, causing carcass runoff to seep into ground water and contaminate the drinking water supply.

To prevent the same from happening after Matthew, the disposal of dead animals has been carefully monitored. Dead hogs are composted on farms or sent to rendering plants according to Brian Long, public affairs director for the state Department of Agriculture and Consumer Services.

After Floyd, the state’s Clean Water Management Trust Fund bought out 42 hog farms and decommissioned 103 waste lagoons that were located on the flood plains. Considering the difference in flooded lagoons after Floyd and Matthew, it seems that this effort has paid off.

Still, more needs to be done to move animals and their waste out of harms’ way, according to Michelle Nowlin, a professor of environmental law at Duke University. Despite the farms removed from the floodplain, 150 still remain, Nowlin told the Washington Post—it was those farms that Matthew hit the hardest.

Nowlin hopes the destruction caused by Matthew will speed up the process.

“What I do hope, Nowlin told the Washington Post, “is that this serves as a wake-up call in the aftermath for regulatory officials and elected officials to say, we need to finish this job, and get these animals out of the floodplain.”