Making HayWired While the Sun Shines

An InSAR image of the Hayward Fault in Berkeley, California, where the faultline runs directly through the University of California's Memorial Stadium. Courtesy U.S. Geological Survey

Hazards experts often point out that the middle of a crisis is no time to build partnerships. The makers of the HayWired Earthquake Scenario have taken note.

The scenario—which imagines the effects of a magnitude 7.0 earthquake along the Hayward Fault in California’s San Francisco Bay area—marries data-driven science with a collaboration component that is already beginning to spread awareness and spark action in at-risk communities.

“It’s an effort to try to get people to take action that maybe they haven’t before,” said Ken Hudnut, advisor for risk reduction at the U.S. Geological Survey. “It gives communities a really strong base of information they can build on.” 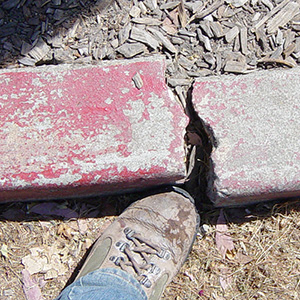 A curb in Fremont, California, shows signs of creep caused by gradual movement along the Hayward fault. ©Leonard G., 2006.

To create that base, the USGS Science Applications for Risk Reduction (SAFRR) program modeled the implications of a large-scale earthquake—a highly realistic threat—and examined a wide-range of hazards that might stem from the mainshock and aftershocks that could continue for up to two years after the quake. Communities can use the models to better prepare for the repercussions of a similar earthquake.

The possible outcomes are bleak—hundreds are likely to die and thousands more would be injured. Hundreds of thousands others would be left homeless, while interruptions in power and water supplies could last up to six months before service is fully restored. Fires would immediately follow the quake and landslides will plague the area for months or years after. Transportation and telecommunications issues would abound; the economy would be devastated.

Models and forecasts can be powerful tools—but only if they’re in the hands of the people who need them. That’s one area where the HayWired scenario has had particular success. The SAFRR team brought on a coalition of partners early in the process—a move that not only allows for more realistic prediction, but has meant that the scenario data could be beneficial even before its release.

Since the public rollout out of the scenario last month, the work has received widespread media attention. The State of California launched its Outsmart Disaster information campaign in conjunction with the scenario and USGS has created “geonarratives” that help visualize results. Local governments, such as Oakland, are using scenario data to shore up attempts to improve seismic safety regulations.

Much more is to come. The next volume of the scenario is expected to be released in October 2018 when many events recognizing the 150th anniversary of the last significant Hayward fault quake are planned. That piece will look more closely at the societal impacts in at-risk communities, telecommunication issues—including Internet—that might arise, early warning systems, and economic impacts. Having such reliable information available—especially access to datasets and metadata—is key to ensuring that it can be used for planning and communication, Hudnut said.

“It’s all there in an open, transparent way,” he said. “It just gives everybody as much, or possibly more, information than they can ever use.”

The closing plenary of the Natural Hazards Workshop will be devoted to the role the HayWired Scenario has played in helping communities understand and prepare for earthquake risk. Learn more here.