New Knowledge and Next Steps

The devastation of 2017 might make it seem otherwise, but the United States is not helpless against disaster. We have, for years, been aware of many effective policies and practices that can diminish the impacts of extreme events. We even know something about why we don't implement them.

Separately, each of the two initiatives packs a wallop. The Mitigation Saves report, for instance, updates the much-cited estimate that every $1 in mitigation saves $4 to a new calculation of $6 saved for every dollar spent. The Strategy, on the other hand, manages to boil down the mitigation miasma to six desired outcomes. Taken together, the two documents provide a double whammy of the power of disaster mitigation and tools to help talk about it. 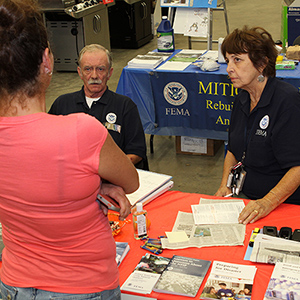 Ever since the original Mitigation Saves report, Natural Hazard Mitigation Saves: An Independent Study to Assess the Future Savings from Mitigation Activities was released in 2005, it has loomed large in discussions about mitigation and resilience. The easy-to-understand benefits-cost ratio resonated with champions of mitigation investment.

"I've heard anecdotally from many people that they've used the study to justify and encourage mitigation," said Keith Porter, a research professor at the University of Colorado Boulder and principal investigator of the interim study. "It's been a lot of the impetus for actually doing mitigation."

While that might be a happy outcome of the initial study, it's not the ultimate point, Porter said.

"The purpose is to inform risk mitigation decisions," he said. "We're just saying the benefit-cost ratio may be a factor in making cost decisions, and here's our best estimate."

With the new Interim report, that estimate just got a lot more detailed, which is why we're seeing a $2 increase in the return on investment. While the previous study made conservative estimates, the update was able to take advantage of more and better data to offer a more nuanced portrait of the benefits. In addition, this edition the report includes analyses of social impacts of mitigation, ranging from reducing rates of post-traumatic stress disorder to the potential to spur mitigation-related jobs.

Not only was the project team able to determine mitigation investment saves more money than first thought, they were also able to quantify the impact of constructing buildings beyond the 2015 International Building Code. In that instance, the study found $4 in savings for every $1 spent, as well as estimating that about 87,000 mitigation-related jobs would be created.

While the new report updates are bound to be a valuable tool in supporting calls for mitigation investment, there's more to come—hence the Interim in the title. Report readers can expect new work to be rolled out later this year, including the benefits of private-sector retrofits and benefit-cost ratio for the remediation of risk to lifeline infrastructure.

While Mitigation Saves can be a powerful vehicle for helping communities drive mitigation funding, the National Mitigation Investment Strategy will help keep them on the road.

"It's a series of actions that say 'this is how you get to resilience,' said Kathleen Boyer, a policy analyst with the Federal Emergency Management Agency Federal Insurance and Mitigation Administration. "The goal is trying to get communities to be more aware of mitigation; that mitigation becomes part of the way they think."

The strategy—still in its draft form (and accepting public comment through March 11)—sets out to accelerate private and non-profit mitigation investment and innovation, improve collaboration with other governments, and assist in making data-informed decisions.

To do that, the strategy has created recommendations according to six desired outcomes. Suggestions range from unmistakable needs such as creating a common vocabulary for understanding risk and mitigation to those that might be more controversial such finding ways state and local governments can help shoulder mitigation costs. Throughout the document highlights partnerships and projects that are achieving results.

The strategy was created in response to a recommendation from the Government Accountability Office after it analyzed disaster resilience following Hurricane Sandy.

When examining the funds spent by federal agencies, the GAO observed that there was "no comprehensive, strategic approach to identifying, prioritizing and implementing investments for disaster resilience, which increases the risk that the federal government and nonfederal partners will experience lower returns on investments or lost opportunities to strengthen key critical infrastructure and lifelines. In other words, we were missing out on opportunities to reap our full $6 return for every buck spent.

Currently the strategy is meant as a conversation starter to get stakeholders-from federal agencies to local governments to nonprofit organizations to homeowners-talking about what pieces of resilience they can uphold. Paired with the Mitigation Saves study, those stakeholders will hopefully be able to make informed decisions that lead to safer homes and communities for everyone.

"We know it's more complex than just saying, these are the best practices-go forth and implement them," Boyer said. "This is a combination of best practices and determining how do we coordinate and communicate to get those resilient outcomes."