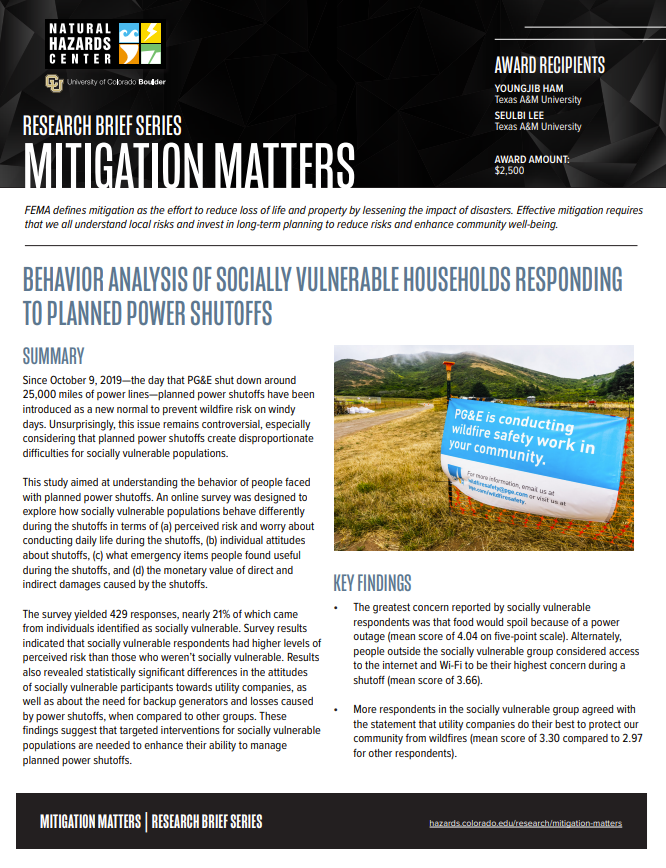 On October 9, 2019, California’s largest utility company, PG&E, shut down around 25,000 miles of power lines as a preemptive strategy to reduce the risk of wildfires caused by windblown debris that came in contact with power lines (Rhodes et al. 20201). The widespread planned blackout affected more than two million people across California (Wong-Parodi 20202). Elevators and traffic lights stopped working, schools canceled classes, businesses closed, and some households were without electricity for up to five days. Unsurprisingly, this issue brought heavy criticism, especially in light of the impacts on vulnerable populations. In one incident, a northern California man dependent on oxygen supply equipment died within 12 minutes of the PG&E power shutoff (McDonald, 20193). According to a regional daily newspaper, firefighters responding to the emergency tried to use a defibrillator but could not revive him because there was no power (McDonald, 2019). In another instance, a 72-year-old woman, recalled having to decide between charging her electric wheelchair or her heart monitor (Chabria & Luna 20204). Although the planned power shutoffs are meant to save lives and property from wildfires, they create dire consequences for some populations, such as older adults, people with disabilities, and those experiencing poverty. In other words, blackouts might be inconvenient for some but life-threatening for others.

This study conducted a survey to examine the behavior of people who have experienced planned power shutoffs in California. The data was collected using an online survey platform, Qualtrics. The questionnaire included 34 structured questions about planned power shutoffs at the household level, including perceived risk, attitudes, needs, and losses.

We collected 559 zip codes included in a PG&E outage map to select addresses. Then, the online survey platform, Qualtrics, invited survey participants based on the collected zip codes. The online survey link was distributed via email and invited subjects were first asked to confirm that they either experienced planned power shutoffs or received alert notifications of shutoffs from September 2019 through October 2020. If the subjects answered yes to one or both of the two questions, a consent form outlining the purpose of the survey and respondent rights was provided. By signing the consent form, the subjects agreed to participate in the survey and received a Qualtrics incentive ($4 cash value) as compensation for the completed survey. This survey protocol was approved by the Institutional Review Board of Texas A&M University on July 21, 2020 (IRB#2020-0587).

The survey first assessed the social vulnerability of participants using four responses that were measured using a 5-point Likert scale (with choices of strongly disagree, disagree, neutral, agree, and strongly agree). Participants were asked to rank the following potential impacts of their exposure to the planned power shutoffs:

Participants were defined as socially vulnerable if they answered “strongly agree" to one of the above four questions.

Note: Respondents were asked to rate their level of agreement (strongly disagree, disagree, neutral, agree, strongly agree) with each statement.

Loss was expressed as a monetary value of direct and indirect damage caused by planned power shutoffs as evaluated by respondents. Detailed survey questions and response categories for loss are given in Table 2.

The surveys yielded a total of 440 responses. After checking the validity of the collected survey data, 11 respondents were excluded from the analysis because they have experienced power shutoffs for reasons such as lightning, equipment malfunctions, or unpaid electric bills. As a result, the final sample consisted of 429 respondents: 189 males, 236 females, and four unspecified gender designations. Respondent ages ranged from 19 to 79 years old.

Table 3 shows respondent demographics by gender, age, education, and family income compared to data about Californians from the 2019 U.S. Census (U.S. Census Bureau, 20198). Although the sample distribution of gender and family income is relatively similar, there are several biases in age and education. Our study sample slightly over represents 35-44 age group, for example. Those with post-graduate degrees are also overrepresented. This is generally reflective of sampling biases that occur in online surveys (Boas et al., 20209). Such biases could be mitigated by an increased sample size and do not change the main conclusions of the survey or affect generalizability.

Socially Vulnerable Groups and Others

All data analyses were carried out using R software for statistical computing. We converted ordinal variables, perceived risk, attitude, and need into a numerical scale, noting “strongly disagree” as one point through to five points for “strongly agree.” A two-sample t-test was run to determine whether there were differences between socially vulnerable respondents and the other respondents. The mean and standard deviation of each survey item are given in Table 4.

Similar to the previous studies (Beatty et al. 201910; Dominianni et al. 2018), respondents in our survey reported that access to drinking water, flashlights, nonperishable food, and batteries would help keep them safer during the power shutoffs. Although we did not observe meaningful differences between the two groups in most survey items, socially vulnerable populations indicated a greater need for backup generators (the mean score was 3.87 for socially vulnerable respondents, while the mean score was 3.54 for other respondents; p < 0.05. See Table 4). In open-ended questions, some respondents also reported that having ice and candles on hand could be useful when experiencing a power shutoff.

This study shed light on the importance of understanding how different people cope with planned power shutoffs that temporarily disrupt electricity service during times of high fire risk. The survey results confirmed that there is a clear disparity in the ability to adapt between socially vulnerable groups and others.

A Matter of Survival

Socially vulnerable respondents more strongly agreed that utility companies did their best to protect their community when compared to other respondents. This positive attitude towards utility companies could be explained in the context of responsibility (Fox-Rogers et al., 2016; Guliasi, 202111). As socially vulnerable groups perceive themselves as being susceptible to external environmental changes, they may consider the risk associated with power shutoffs as their own responsibility because they are vulnerable. This can lead to self-depreciation and a sense of hopelessness that makes them less able to protect themselves and advocate for their rights, which in turn makes them even more vulnerable. Therefore, it is imperative to make every effort to stop this vicious circle.

There are limitations to this study. First, since survey respondents were recruited through web-based services, the sample was less diverse, especially concerning age and educational status. The survey sample only included people who are skilled at using a computer since the survey was conducted online. Such characteristics of respondents infer that they are likely skillful at using mobile devices, better able to access information about planned power shutoffs, and accordingly, less susceptible to the power shutoffs compared to those who are unfamiliar with computers or mobile devices. Second, in this project, the level of social vulnerability was assessed based on information provided by the respondents and so may not entirely reflect the views of those who are often regarded as socially vulnerable in the related literature (e.g., families with low-income, older adults who live alone, less educated individuals, those who don’t speak English well, single parents, people with disabilities, and those who lack employment and housing). In this context, future studies will include approaches to identify the needs and challenges of various socially vulnerable groups. Also, future studies will discuss how to provide proactive interventions for socially vulnerable groups.