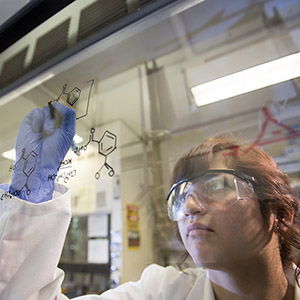 A STEM in an NSF-funded program at California State University Fullerton works to solve a problem. @Matt Gush, 2012

The two-year, $300,000 award will fund the Scholars from Under-Represented Groups in Engineering and Social Sciences: SURGE Capacity in Disasters pilot program, which aims to address the disproportionate harm that disasters often produce within minority communities. The SURGE pilot will focus on strengthening the recruitment, retention, and matriculation of minority students in STEM-related doctoral programs as a means increasing the representation of these groups among disaster researchers, decision-makers, and practitioners.

In collaboration with the Bill Anderson Fund, the SURGE pilot will offer comprehensive training via workshops, research and professional development opportunities, and a multifaceted mentorship program that will help students in establish themselves within the hazards and disasters arena. By combining cross-disciplinary academic support and network-building activities, SURGE collaborators seek to fundamentally transform the future of disaster research and emergency management.

The SURGE team joins just 26 other awardees as part of the Inclusion across the Nation of Communities of Learners of Underrepresented Discoverers in Engineering and Science (NSF INCLUDES) program, which is designed to expand the nation’s leadership and talent pools by creating paths to STEM for underrepresented populations. The NSF INCLUDES approach builds on a growing body of scientific research suggesting that complex problems are best addressed through collective impact or networked communities focused on finding solutions through common goals and shared resources.

NSF INCLUDES is among NSF’s 10 Big Ideas for Future NSF Investments research agendas that identify areas for future investment at the frontiers of science and engineering.