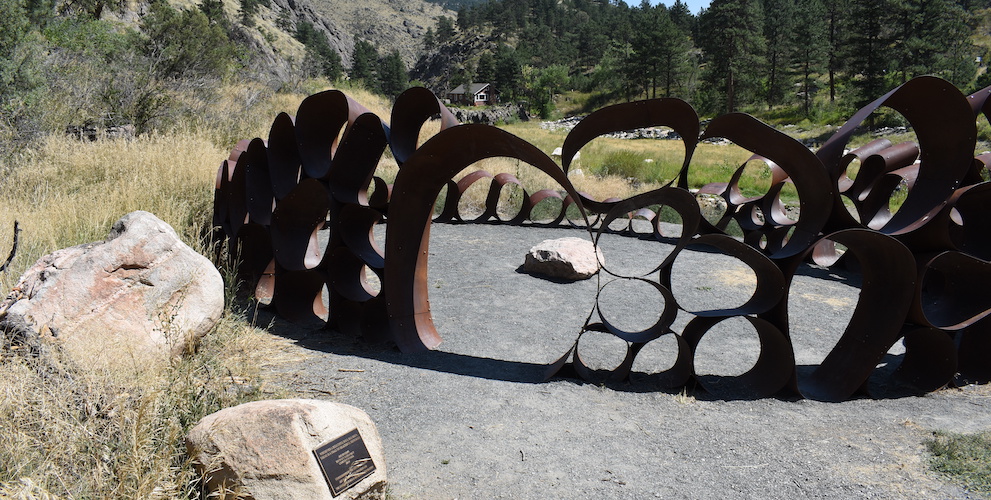 A memorial on the band of the Big Thompson river was created to replace previous flood memorials damaged in floods along the Front Range in 2013. ©Zoe Boiarsky, 2021.

When tragedy strikes, communities can find comfort and healing in memorials. Remembering and respecting loss, educating others, and celebrating recovery are among the many purposes memorials serve for communities that have been touched by disaster.

Not all memorials commemorate the same aspects of an event, however. It was this realization that led Natural Hazards Center Undergraduate Research Assistant Zoe Boiarsky to create a scale to gauge the intentions and impacts of disaster memorials.

In her undergraduate thesis, Flooding Memorials in the Northern Front Range of Colorado, Boiarsky noted that natural hazard memorials represent human-environmental relationships, which isn’t the case for memorials of human-caused events such as war or terrorist attacks.

Boiarsky’s scale used flood memorials in Colorado to examine the how disasters are remembered through three lenses—purely natural, purely human-caused, or as a human-environment hybrid. This scale recognizes the significance of human interaction with the natural world and critically considers what is being memorialized: the hazardous event itself or the losses that resulted from it.

According to the scale, memorials that frame hazards and disasters as purely natural ignore human responsibility in the creation of risk and focus only on the human toll. This type of memorial characterizes disasters as unpredictable and unpreventable, with so the emphasis is placed on monetary, life, and community losses after the event. These types of memorials can include photos or text portraying property damage, people who were killed or injured, or money spent on recovery.

Memorials that focus on disasters as purely human-caused emphasize the role of human action and social elements as the primary contributor to disasters, according to the scale. Disasters commonly acknowledged in this category include industrial fires, dam breaks, and nuclear explosions. Memorialization of these hazards focuses heavily on how human behavior contributed to the event and the impacts on the environment and community in the aftermath.

Finally, the scale defines memorials that frame disasters as a result of a complex human-environment relationship. These memorials are mostly concerned with preparedness and mitigation. This category does not place blame on either people or the environment after an event, but instead recognizes the interrelated factors of nature and society that contribute to disaster. Memorials under this category highlight emergency planning and preparedness measures, and holistic information about mitigation and impacts of the event.

Boiarsky’s scale reveals patterns about the influence human-environmental relationships can have on a community’s memorialization of disaster. Public acknowledgements of important events reflect how we feel about and the role we play in natural hazards. With this scale, memorials can be used to better understand how communities process, respond, and recover when disaster strikes.