Graffiti found in Joplin, Missouri during the one-year anniversary Unity Walk. This is just one of many messages of hope that were found around the city following the 2011 Joplin Tornado. ©Godzillafirebox, 2012.

They did it. The U.S. House of Representatives and the U.S. Senate both passed Republican-initiated tax reform bills. Congressional leaders now have to merge the House and Senate versions before sending them to the Oval Office for a signature. Regardless of what is saved or scrapped as these different bills are melded together, a wide range of credible, nonpartisan analysts agree that either one of these plans will swell the nation’s economic deficit, perhaps as much as $1 trillion or more over coming years.

If we paid off that debt at $1 per day, it would take us about 32,000 years to move from the red and into the black. Please let that fully settle in for a moment.

As politicians and pundits continue to debate the fiscal deficit, I hope that the rest of us begin a national conversation regarding the moral deficit—here meaning the calculation that distinguishes right from wrong; the capacity to recognize our mutual responsibility to one another and to this planet that we all depend on for survival.

The Latin root of deficit, deficere, simply means “it is lacking.” Returning to the root reminds us that not all deficits involve a dollar sign. Some deficits refer to deficiencies of a different kind.

As I’ve previously asserted, I firmly believe that the two biggest challenges facing humanity are climate change and rising social and economic inequality. Right now, we are collectively failing to take either of these threats seriously or to treat them with the urgency that they so deserve. 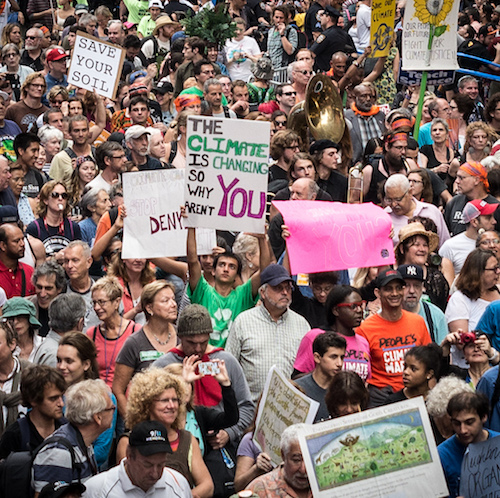 In fact, some of our elected and appointed leaders are actively working at the national level to dismantle progress that has been made in reducing greenhouse gas emissions, building climate-resilient infrastructure, implementing early hazards warning systems, regulating toxic industries, and enforcing numerous environmental protections. At every turn, environmental science—and knowledge in general—is under attack, as are the federal agencies that exist to protect the public and the places where we live, play, work, and go to school.

When it comes to rising social and economic inequality, the budget projections are clear—the GOP-initiated tax cuts for corporations and the wealthy will not trickle down to the middle or working class. In fact, these proposed initiatives will further widen the barren desert that divides the richest Americans from all the rest. And when it comes to the working poor and the impoverished in this nation, the further scorching of our already withered social safety net will leave tens of millions of our fellow Americans living in more desperate and dire circumstances.

These failures to act to curb climate change and to reduce inequality and related social injustices are obviously related to economic processes, but they involve something much deeper than that. It is at least conceivable that one can repay a financial debt. Our federal government might even be able to figure out how to pay off a trillion-dollar deficit, given enough time. It is improbable, but it is still in the realm of the possible.

But there are some debts that simply cannot be repaid. If we willfully ignore the rapid decline of our fragile ecosystems, environmental treasures like the Great Barrier Reef will continue to die off and could soon be gone forever. If we do not tend to changing environmental patterns, more animals will experience harm and even more species will become extinct. If we do not invest in retrofitting schools and focus on building homes and businesses safely, children and adults will perish in future disasters.

Our legacy as a people and as a nation hangs in the balance. We must ask ourselves, do we want our shining accomplishment of this era to be that we shortened the length of our tax forms? Or would we rather be remembered as those who worked together to extend and enhance the lives of others? Do we really have a desire to go down in history as those who said yes to more tax cuts and resource transfers for the wealthiest Americans while saying no to spending on education, health care, public transportation, and other social services that are designed to promote the public good?

The various deficits that are currently being incurred matter enormously for our hazards and disaster research and practice community. How can we continue our work to help build sustainable communities, if future generations of children are born into a world where they are saddled with enormous debt? How can we help promote community resilience, if the most marginalized members of this and future generations are rendered even more vulnerable and exposed to threats of all kind?

These are serious times, and we need to seriously contemplate the values and principles that guide us as an interconnected and interdependent human community. It is only then that we will be able to move beyond a discussion focused solely on dollars and cents, to a richer conversation about what actually ensures that all people are treated with dignity and have an equal opportunity for life, liberty, and the pursuit of happiness. Let us begin this movement toward reducing the mounting moral deficit, and let us not delay.