This is a lightly edited and linked version of testimony* about post-disaster housing recovery that was delivered to the Texas Senate Committee on Intergovernmental Relations on November 1, 2017. Because this is an example of research being shared to influence policy action, we are reprinting the testimony in full for this Research Counts.

Good morning. For those of you whom I have not yet met, I’m Dr. Shannon Van Zandt, current department head of Landscape Architecture and Urban Planning at Texas A&M University. I’m also a faculty fellow with TAMU’s Hazard Reduction and Recovery Center. I am one of the nation’s leading scholars on housing recovery after disaster, particularly for low-income and minority populations and neighborhoods.

Over the past two months, I have visited several small Texas communities impacted by Harvey, including Port Aransas, Rockport, Fulton, Ingleside, and La Grange. I’ve also spent a lot of time talking with other scholars and practitioners who are experts on the flooding that Houston experienced, as well as to representatives of foundations working in the Houston area, to discuss what Houston and Harris Counties priorities should be during the recovery process. 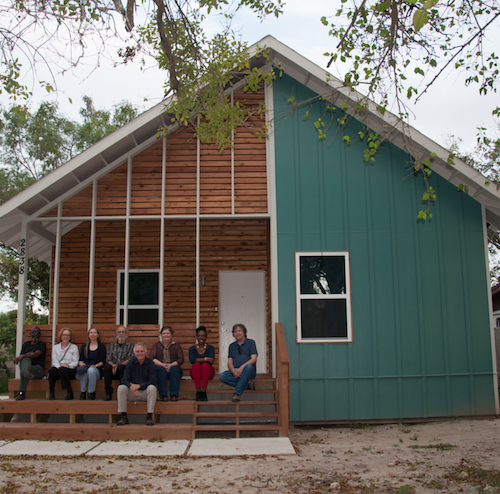 A RAPIDO House—a rapid-recovery housing model that allows residents to return to their property quickly—that was constructed in Brownsville, Texas after Hurricane Dolly. ©Chip Van Zandt, 2014.

Many of you may remember me from the last two legislative sessions, when I came to discuss the need for communities to pre-plan for recovery to expedite the restoration and recovery process after a disaster. Some of you toured some of the RAPIDO homes with us. You may remember that I have studied recoveries from Hurricanes Ike and Dolly extensively, and I have compared their recoveries to those experienced in many other communities that have experienced hurricanes and/or catastrophic flooding. While I don’t think any of us could have predicted a storm like Harvey, we could—and did—predict the nature of damage that we’ve now seen. Further, based on my research and that of my colleagues, we can predict that the recovery process will be slow for our more vulnerable populations and that the outcomes over time will be unequal—furthering pre-existing inequalities and even exacerbating them.

We currently find ourselves in the transitional phase between response and recovery. Once rescue is complete and debris has been cleared, people are looking to return home from whatever sheltering solution they found. Most households have had their damage assessed, and have an initial settlement amount from their insurer or from the Federal Emergency Management Agency, and they’re ready to start rebuilding. Or they’ve been told that they will not be allowed to rebuild in place, and are trying to figure out what’s next.

At this phase, the focus is on temporary housing—places for people to stay as they repair or replace their homes, or find new homes. Those who were adequately insured, or who have their own financial resources available, will be okay. They have already started rebuilding, and they can afford to find someplace to live in the meantime.

Our current federal policy assumes that this is the case for everyone—that the private market will take care of these households. And for middle-to-upper income homeowners, it will. Homeowners in Cypress Creek and Kingwood, and even parts of Meyerland and Bellaire, will be mostly okay. The neighborhoods flooded by the Addicks and Barker releases will be mostly okay—mad, but okay. Vacation homeowners along the coast have homes elsewhere and are okay. But for everyone else—low- and moderate-income homeowners and renters, it will not be okay. 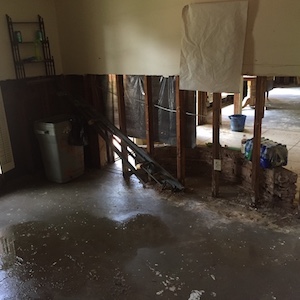 Flood damage in the Southwest Houston home where the mother of a friend of Van Zandt's lives. ©Chip Van Zandt, 2017.

After Katrina, the solution was mostly mobile homes. After Ike, it was mostly rental vouchers that allowed households to rent on the private market. Neither of those solutions worked particularly well. This time, neither of those solutions can adequately meet the overwhelming need. There aren’t enough trailers, and there are not enough apartment units. The community members that I have talked to are feeling lost. They don’t know what their options are, and they don’t know if or when anyone is coming to help.

Most are trying to come up with their own solutions, but they are thwarted by limited resources, by a lack of knowledge about resources that may be available to them, and by confusion about where it is safe to rebuild and where it is not. In other words, they don’t have a plan in place, even for temporary housing, much less permanent housing. The risks of not solving this problem are considerable.

The delays and instability that they are experiencing will have long-term impacts. They will have impacts on local economies, many of which depend on low-wage workers. They will destabilize marginal households and may cause them to descend into poverty. They will put many families into crushing debt that they may never recover from. They will temporarily or permanently displace residents into areas that are less safe, less connected, and offer fewer opportunities. In some cases, small communities may cease to exist.

There is no example of a disaster housing recovery program that has been entirely successful. Although researchers learn something new with each new disaster, we have yet to get a handle on the problem. People are left out, recovery takes too long. A new system is needed desperately.

The most important thing we learned from our RAPIDO demonstration program is that pre-planning is necessary. A large scale temp-to-permanent housing program is simply not feasible without systematic planning—before the disaster. We have lost two opportunities over the last two legislative sessions to initiate a program that would allow communities—especially low-capacity communities along the coast—to work with our Hazard Reduction & Recovery Center to undertake such planning.

Written version of testimony provided by Shannon Van Zandt. Audio of the testimony is available on the Texas Senate Committee on Intergovernmental Relations website.