Hurricane Maria made landfall in Puerto Rico on September 20, 2017. Two months have passed and people in Puerto Rico remain in immediate danger, with scarce electricity and limited access to water. Basic infrastructure functions that maintain water potability, food preservation, sanitation, and hospitals are either non-functioning or running on diesel-powered generators that rely on dwindling fuel supplies.

The humanitarian crisis unfolding in Puerto Rico in the aftermath of Hurricane Maria is rooted in a range of issues from inadequate planning, to the need for common-sense changes to emergency protocols, to the administration’s failure to respond with urgency when lives are at stake. This last point highlights the profound impact of Puerto Rico’s colonial status on the recovery process.

The islands’ U.S. territorial status has meant continuing dependence on shipments of supplies and aid from the continent, with the federal government lifting the Jones Act restrictions on shipping to the island for only ten days. Aid from Venezuela was flatly rejected by the U.S. government despite a ship bearing thousands of meals requesting to dock, leading many observers to declare the de facto existence of a U.S. blockade of Puerto Rico comparable to the one imposed on Cuba. 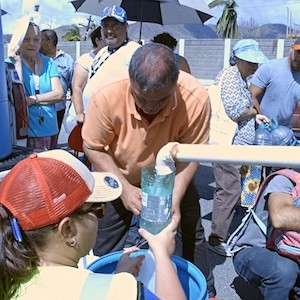 The post-Maria reality in Puerto Rico is that infrastructure needs to be rebuilt almost from scratch. Environmental hazards are plentiful.

One urgent problem relates to waste management. When existing landfills are already full of toxic waste, as is the case with the municipality of Peñuelas, for example, dealing with large amounts of disaster waste poses an even greater challenge than usual. Poor water management can also lead to epidemics. Furthermore, Puerto Rico has experienced serious challenges related to the proper disposal of cadavers, a shortage of forensic pathologists, and a lack of consistent electricity to power morgues and laboratories.

We call for long-term recovery efforts to be informed by a holistic analysis that centers the health and well-being of Puerto Rico’s residents. Puerto Rico has medical and other social needs that are rooted in a long history of U.S. colonialism and structural inequality; social facts that must be understood and accounted for as part of an effective and socially just disaster recovery strategy. These on-the-ground realities are central, not incidental, to the most basic structural rebuilding.

Health-related emergency response is largely framed as being about immediate life-saving measures. However, once the emergency phase of a disaster of this scale is over, less attention is typically paid to the chronic aspects of public health and clinical medicine that are core to people’s wellbeing. Hospitals may be rebuilt, but hospitals alone cannot be the sole sites of intervention for the community-based public health initiatives that are needed to help people to recover their mental and physical health over the long haul. Similarly, while proper management and disposal of debris in the immediate aftermath of a disaster is an emergency effort, long-term planning for municipal waste management is a chronic issue that must integrate health, environmental, economic, and social justice concerns.

Benjamin Paul noted in “Health, Culture, and Community”that successful public health initiatives begin “with people as they are and the community as it is,” and goes on to say that “a willingness to meet them must be matched by a knowledge of the meeting place.” The typically militarized control-and-command culture of disaster response agencies does little to recognize the specific weaknesses or strengths of local institutions and communities. It is presumed that in an emergency, a one-size-fits-all approach is sufficient. However, this approach often results in the diminution of the potential for local cultural resources to support resiliency and can be counterproductive.

In the case of Puerto Rico, there is also a significant lack of sufficient doctors and other medical personnel. Health care institutions are generally under-resourced, resulting in barriers to accessing medical treatments such as chemotherapy, dialysis, and HIV or other long-term medications. For example, Congress capped Medicaid on the islands, which meant that although the U.S. government covered an average of 57 percent of Medicaid costs for U.S. states, it only covered 15-20 percent of such costs in Puerto Rico. The deaths of many vulnerable people in the coming weeks and months will be registered as an outcome of chronic illness—but in reality these are the consequence of the ongoing effects of the hurricane.

Just as the notion of refusing coverage on the basis of pre-existing conditions is egregious, long-term recovery should be focused on treating the community as it actually exists after the disaster—to do otherwise is unconscionable. The question of whether a particular disaster “caused” a specific health outcome is an actuarial one, but it is not a humane one.

As scholars, we are working to address parallel issues in public health, waste management, and disaster recovery, emphasizing in particular the structural circumstances that influence overall community health and individual prognoses. The tight focus on emergency health measures in Puerto Rico keeps these insights largely absent from health-related analyses. Yet, it is imperative that they be foremost in planning for recovery in the days, months, and years ahead.