Beware of Recovering the Worst Parts: Race, Class, and Gender Guidelines for a Just Recovery

Guatemalan women attend a school festival hosted by a humanitarian organization. Although women's voices are vital to recovery, their role as caregivers are often seen as reason to disqualify them from community efforts. ©Erik Törner, 2009.

While politicians and the media often describe disasterscapes as blank slates for new development, disaster scholars—and many disaster survivors—know that post-disaster recovery is usually built on pre-disaster social scripts, power dynamics, and resource distributions. Well-meaning recovery efforts, whether public, private, or grassroots, can also reproduce or even deepen preexisting inequalities. Interrupting this pattern requires better understanding the processes that perpetuate injustice. When Hurricane Katrina struck New Orleans, human-made canals sent water surging into neighborhoods. Similarly, years of pre-disaster organizational structures, habits, relationships, and values carve invisible social pathways along which post-disaster decisions, funding allocations, and leadership are carried. Ironically, the very sense of urgency that characterizes recovering communities makes it seem like performing an inventory of these taken-for-granted processes is a luxury. Without it, however, post-disaster methods often recover the worst of a community’s injustices right inside the shiny new schools and freshly painted homes. 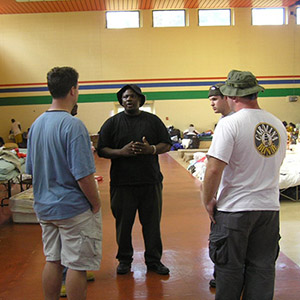 The most recent generation of disaster scholarship and advocacy demonstrates that some of the most important preexisting conditions that inform recovery are race, class, and gender. Without attending to race and class and gender and their intersectional interaction, even the best recovery efforts are likely to regenerate inequalities. Doing recovery differently means: 1) having a clear sense of how race, class, and gender are already embedded in our recovery practices; 2) performing ongoing racial, economic, and gendered audits of our recovery activity; 3) and trading in some of the expediency that characterizes recovery efforts for a commitment to performing them more justly.

The reproduction of race, class, and gender inequality happens at every level of recovery decision making: federal, state, local, and community; and public, private, non-profit, grassroots. I’ll use the lowest level—community-based recovery efforts—from Hurricane Katrina as an example, because it is the level that people often feel the most agency, and the powerful structures that influence their behavior can be the most invisible and informal.

Organizing for a Just Recovery After Hurricane Katrina: Intersectional Lessons

In the days and years after Hurricane Katrina, many community-based social justice organizers drew on racial and economic justice principles—and centered the voices of low-income people of color—as they sought to influence recovery policies. This commitment did not happen spontaneously. It was the fruit of years of highly intentional racial justice organizing in the majority-black city of New Orleans. It was also made possible by well-developed racial justice principles in social movement networks across the country. Here we see the doctrine at work in a positive way: post-disaster racial justice activity was built on firm pre-disaster antiracist foundations.

Unfortunately, feminist analyses were not as strong. This meant that in the rush to recovery advocacy, activists often reproduced gender inequalities. For example: men disproportionately appointed themselves to leadership and decisionmaking positions, describing women’s caregiving obligations (expanded and complicated by disaster) as disqualifying; perpetrated sexual violence within advocacy groups; and framed strategy (about health care, housing, etc.) in gender-neutral ways despite repeated efforts by women of color to demonstrate their deeply gendered, intersectional implications.

Absent an intersectional gender analysis that checked taken-for-granted assumptions and collective habits, men wound up making decisions for the bigger, better resourced groups, demonstrating masculinist preferences for protest over hybrid models that also responded to people’s survival needs. Caregiving obligations that disproportionately fell to women became reasons to cut women out of leadership and dismiss their contributions, even when they were better qualified. Additionally, without an analysis of the pervasive workings of rape culture, the cultures and structures that enable sexual violence went uninterrupted.

Wound up, disproportionately fell to, and went uninterrupted. Behind each of these passive verbs are myriad active choices, assumptions, agreements, and a lot of momentum.

Taken together, these now well-documented gendered practices meant women and gender non-conforming people were less likely to frame campaigns, direct resources, and have the ability to create safety for all. It meant that feminist priorities around decision-making, family wellbeing, and safety went unheeded. Because neglecting gender analysis always has intersectional consequences, this in turn meant that not only were women harmed by sexual violence perpetrated by white men, but that black men were blamed for it. It also meant that women of color—who knew the most about the intersectional impacts of disaster on people in their communities—did not have the resources to address it and that social justice advocates could not often balance grassroots organizing, recovery advocacy, and meeting the basic needs of hurricane survivors. In order to do it differently these groups would have had to embrace an intersectional race, class, and gender analysis and use it to audit their daily decisions and practices, even or especially those that seemed like common sense.

Recognizing the need to take race, class, and gender into account in every facet of recovery activity is a first step to rebuilding communities that do not re-entrench the disastrous parts of how it was before.