Do I Stay or Do I Go? Hurricane Risk Perception and Evacuation Behavior

Hurricane Harvey evacuees wait in line for a barbecue lunch at a Louisiana shelter. ©Sharon Karr, 2017.

Emergency managers and academic researchers focused on disasters have a common interest in understanding the factors that influence evacuation decisions made by the public. While emergency evacuations can occur in a variety of circumstances, one of the most common—and in many ways, the most complicated—involves evacuation from land falling hurricanes. A significant amount of research has been directed to understanding this context of decision-making.

How do members of the public make a decision to evacuate in the face of a hurricane? Why do some people stay put, even after mandatory evacuation orders have been issued? Why do others leave when the sun is still shining and the skies are still blue?

There is no one answer to these questions. There are a great many practical considerations that influence evacuation behavior, such as work responsibilities, care for family members with special needs, concern for pets, and access to transportation and savings. Past experience with hurricanes is also a critical factor, as is the nature of the coming storm and location of landfall. And of course, forecast and official information is critical. 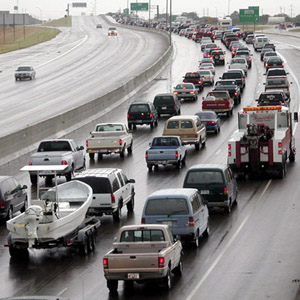 A line of vehicles snakes out of Corpus Christi towards San Antonio in advance of Hurricane Bret. ©Dave Gately, 1999

One influence that is sometimes overlooked, however, is the way in which people view risk. This aspect of evacuation decision making is relatively subtle compared to practical concerns, but nonetheless has a strong effect on the actions people decide to take.

While both modes of judgment play a role, during information-intensive events such as hurricanes cognitive risk perception processes may be especially important as such judgments are typically formed from information that the individual encounters. This information can come from a wide variety of official and unofficial sources. One of the interesting aspects of this form of risk perception is that people often update cognitively based risk perception as they encounter new information.

Similarly, affective risk perception also plays a strong role. In fact, the emotion-based processes of risk perception often have the final say. But they don’t operate in isolation. Rather, emotional reactions to hazards can be built on cognitive processes. A great many forces are at play in affective reactions to risk, such as a past experience with the hazard or even with other hazards. People also have differing orientations toward risk, with some having more risk averse personalities than others. Demographic characteristics such as age and gender can also play a role, as can various social aspects of an individual's life, such as group affiliation and related socialization experiences.

Taken together these two components of risk perception shape how people (individually or in groups such as families) decide to act. Understanding these processes, or at least understanding that they are at work, can provide an improved basis for providing and receiving emergency information, such as hurricane forecasts and evacuation orders. Members of the public can consciously take these processes into account as they make decisions. Simply being aware that decision making involves both information-based thinking and emotion can help clarify the process. Those who professionally communicate forecast and warning information can create more effective messages by purposefully taking these processes into account. Of course, at the same time, it remains critical to remember how much these decisions are influenced by other external factors related to one’s social location, the nature of the decision being made, and the timeframe in which it must be made.

In these critical decision-making situations, all parties want action that maximizes protection. But hurricanes and other hazards can be complex and rapidly changing. When both senders and receivers of hazard and warning information understand this fundamental aspect of public risk perception and emergency decision making, the entire process of communication becomes much more focused and effective.