In early 2018, I co-led a team of engineers and social scientists conducting a Hurricane Matthew recovery investigation in Lumberton. We observed that disaster damage was uneven across individuals, households, and neighborhoods. This disparity is largely a consequence of biased disaster mitigation. Lumberton was rife with examples of disparate losses across its community. This is a problem that arches across many hazards and places across the U.S.

For flood prone areas, we often see biased mitigation through using levees to rationalize building in a floodplain, where it is low- to marginally middle-class households who reside in these areas, even though disaster scholarship has long pointed out numerous failures of levee systems. For flood and other hazards like earthquakes, updating the building code is a common form of mitigation for new construction. Over decades and particularly for multi-family rental housing, high-end apartments and condominiums are updated or newly constructed while outdated, structurally deficient apartments become affordable housing. Renters lack the power to make decisions to adopt and install structural retrofits thus they live at the safety level decided by others. 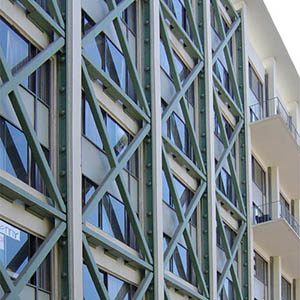 Earthquake retrofit projects, such as this one on the University of California, Berkeley campus, are meant to make people safer, but care must be taken to ensure they are done evenly across communities. ©Leonard G., 2004.

These are just two examples. Across the board, biased disaster mitigation leads to unequal disaster impacts and differential recovery rates in cross-sections of communities. Disparate recovery rates are exacerbated by overlooking recovery policies. These policies span disaster type and include withholding aid to retrofit or rebuild a home to a higher standard, particularly from renters, strict requirements on proving home ownership to receive recovery aid —difficult for those who lose all of their belongings in the disaster— and requirements to demonstrate damage was not, even in part, caused by deferred maintenance. In several instances, recovery assistance intended to support low-income neighborhoods, takes more than a year to be received, leaving residents displaced and in unstable housing.

Fortunately, these problems are solvable using an approach that ameliorates biased disaster mitigation by investing in better infrastructure in socially vulnerable neighborhoods through subsidizing a portion of costs, and updating recovery policy to not overlook vulnerable households. Such an approach would decrease overall disaster losses and shorten the time it takes to recover, particularly among marginalized residents, as I learned from my dissertation research which focused on the impact of earthquake damage on socially vulnerable households.

The research, which was later published as a two-part series (Volume I and Volume II) includes a meta-analysis of the post-earthquake empirical literature. My collaborators and I compiled a substantial number of domestic and international post-earthquake findings that consistently demonstrated more socially vulnerable groups experienced higher rates of physical injury, death, and negative mental health consequences, particularly post-traumatic stress disorder (PTSD), after experiencing an earthquake. Consistent with the hazards literature, we defined social vulnerability according to measurable characteristics: female, low income household, children under the age of 18, those above the age of 65, low education level, and racial minority and ethnicity.

New and improved policies can bring the needed solution into action. Engineers have already designed infrastructure to ensure highly effective structural and nonstructural performance to earthquakes, wind, and floods. Our team has pointed out that targeting vulnerable neighborhoods for mitigation is highly effective at reducing overall disaster losses and speeding community recovery. In fact, our work has revealed that in some cases these mitigation strategies can save billions of dollars, as well as tens of thousands of lives in potentially catastrophic events. This finding justifies subsidizing the initial investment.

Shifting the focus and targeting resources to the most socially vulnerable is a practical solution. The approach has already been implemented in San Francisco and Los Angeles for one building type. The cities, which have high seismic risk, adopted soft-story seismic retrofit mandates in the past five years that make both the cities and their citizens more resilient. Many of the affected buildings are rent-controlled; losing affordable housing units after an earthquake would be devastating for low-income populations and the cities as a whole. The retrofit mandates had complementary tax incentives for building owners and set limits on the total and per month cost that could be passed on to residents.

Progress has been made in some earthquake-prone areas. But earthquakes are not the only natural hazard that threatens our communities, as hurricanes, flooding, and wildfire disasters in the past year have made clear. Where else could we target time, attention, and resources? Social inequality and disparities are prevalent across the country. After each disaster, we see areas hit the hardest are those in which unemployment, poverty, low income, and lower levels of education were already factors. If we want to achieve true justice and equity in disaster mitigation, we have to work towards ending bias in disaster mitigation and recovery policies everywhere.