The 2017 Atlantic hurricane season has now entered the history books as the seventh most intense on record—17 named storms and 10 hurricanes (six of them major, including two Category 5 storms and three Category 4 storms that made landfall in the United States).

Hurricane Harvey's impacts in the area of Houston, Texas; Hurricane Irma's impacts on the west coast of Florida; and Hurricane Maria's impacts on Puerto Rico will be historic events for hurricane disasters in the United States. The Federal Emergency Management Agency reports that approximately 25.8 million people in the United States were affected by those three hurricanes alone, and the National Oceanic and Atmospheric Administration calculates that the storms inflicted a cost of $265 billion. Globally, Munich Re estimates the total insured and uninsured losses from all types of disaster to be $330 billion, with about half of those losses concentrated in the United States. 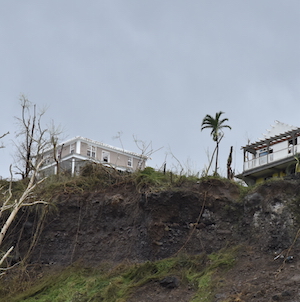 A tattered landscape in Dominica marks the route from a popular resort to the town of Roseau following Hurricane Maria. ©Dominica Government, 2017.

The reality is that exposures to hazards are increasing and climate change will give us more extreme weather events. We know that irrational land use policies, non-compliance with building codes, poor governance, and bad planning in general work together to put more assets and people in harm's way. Hurricane Harvey, for example, demonstrated the folly of unrestrained and unsustainable urban sprawl in a region prone to severe flooding. We will certainly continue to dissect the Harvey disaster and ask how Houston accommodated its remarkable population growth over the last several decades with an uncomfortable question: "Who was put in harm's way, to which threats, by whom, and why?"

Unfortunately, a persistent problem in public discourse is the penchant of public officials—and the media—to label major damaging events as "natural" disasters. The research community knows better, and has for a long time, from Phil O'Keefe and colleagues' 1976 Taking the Naturalness Out of Natural Disasters and Kenneth Hewitt's 1983 "Interpretations of Calamity from the Viewpoint of Human Ecology" to Gaillard et al. in the January 2014 Natural Hazards Observer, Taking the 'naturalness' out of natural disaster (again). And who can forget Ben Wisner and colleagues in At Risk: Natural Hazards, People's Vulnerability and Disasters? They were classically blunt in stating that nature only provides events; it's social and economic structures and processes that are the root causes of our (highly unequal) vulnerabilities.

The problem is that the term "natural disaster," which often puts a slight and too politically convenient emphasis on the word natural, blurs the causal picture in the public mind and subtly shifts responsibility for disaster losses away from their root cause. This blurring is particularly relevant to land use and building standards decisions, which are overwhelmingly political—and largely determine loss patterns and levels. We have to change that game.

At every opportunity, from social media to formal media interviews to op-ed submissions and public presentations, the research community must challenge the usage of the term natural, particularly after a damaging event: This was not a natural disaster. We are the ones who built there. We are the ones who opted for less stringent codes. We are the ones who failed to provide for mass evacuation in those areas. This is not nature's fault. This is on us, and on our leaders specifically.

To be clear, this assertive role for the research community means becoming more political in our advocacy, engaging in that arena and with the media, and speaking truth to power. The responsibility is particularly strong for researchers in higher education, because the values and norms in those institutions, including academic freedom and tenure, are crucial protections that allow us to speak truth to power with at least a modicum of professional and financial safety.

After all, if we the research community, with our protections, don't challenge a terribly misleading but popular term, who will?