Together We Stand: The Vital Role of Social Networks among Displaced Low-Income Women

Destruction from Hurricane Katrina nine months after the event. The devastation of entire neighborhoods forced many people to relocate for long periods of time, removing them from the support of family and freindship networks. ©Thomas Hawk, 2006.

The wrath of Hurricanes Harvey, Irma, and Maria and subsequent population displacement raise vital questions about resettlement and recovery. Lessons learned from Hurricane Katrina show that policy will drive the long-term effects of these recent storms for low-income households headed by women. Indeed, post-storm recovery for the most marginalized populations will hinge largely on whether or not social networks among the poor are rebuilt. Housing, employment, and transportation infrastructure must create opportunities to restore these networks to avoid deepening inequality.

Between 2005-2009, I undertook a long-term study of the resettlement status of women and their families after Hurricane Katrina. This allowed me to document paths and practices of recovery that go well beyond demographic data about households and individuals. I was able to observe and analyze the critical role women played in managing family recovery and highlight the crucial role kinship networks played in resettlement. 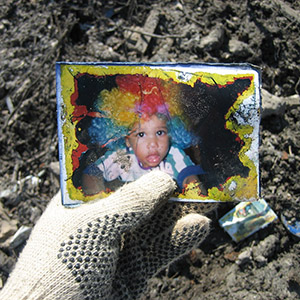 A cleanup volunteer holds a picture found in the rubble of a home after Hurricane Katrina. Family networks are vital in helping rebuild after disaster. ©Brian Wolfe, 2006.

My research showed that—in much the same way they organized the daily household and network operations before the storm—women head of households assumed responsibility for the post-disaster period. Their overwhelming concern was to reestablish kin networks that had dispersed after leaving shelters in New Orleans. The reason why kinship networks were vital in displacement was because the resource exchange among this network had been a key means of the network’s survival. This confirms a long-standing sociological observation that low-income households depend on resource exchange to provide the goods and services they rely on. For example, elderly network members provided child care so that mothers can seek employment, food is given or shared when a household runs low, transportation is often pooled since only a few have cars; money, housing, and medicine is shared too. My post-Katrina research documented that these networks assumed an even more vital role for resource recovery during displacement, and that it was women who expanded their daily network responsibilities to face the new challenges in the post-disaster period.

The separation of networks created a danger to short- and long-term survival. All 60 of the evacuees who participated in my study spent their entire lives in New Orleans, and most had families that were rooted there for generations. All recalled living near each other; being in and out of each other’s houses; and sharing meals, money, housing, job information, child care, vehicles, and so on. Before Katrina, households within these networks could manage on their barely livable wages—because they were near to each other and had a well-developed system for sharing resources and services. Conversely, socially isolated households with none of the same network capacity, struggled with the depths of poverty.

I directly observed the consequences of variability on a network’s capacity to rebuild. In my project, some families eventually moved to Houston, while others returned to New Orleans. Among those who moved to Houston, a large part of the kinship network reconvened, partially because the housing authority where one of the aunts (who took in dozens of people initially) was able to find apartments for the extended family in the same facility. Combined with the availability of jobs and public transportation, this network returned to the sharing of resources and a state of stability that has continued over time.

In New Orleans, by contrast, the remaining housing stock was both too expensive and too dispersed to allow the pre-existing network to reunite. Public housing units were torn down, eliminating opportunities for network consolidation. Households often moved often, as rents increased dramatically, or transportation was poor, or jobs were unavailable close by, or neighborhood crime and other dangers increased to intolerable levels. Households in this context became isolated units—radically unlike their pre-Katrina lives—and were spread throughout the city with little access to the network exchange they had previously relied upon. In this situation, where network unification was virtually impossible, households lacked the basic necessities for survival. Respondents pleaded for food when I would come to visit. They were living in fear and with no hope—a poverty level that could have been avoided if accommodations had been made that allowed previous networks to gather again with stable housing.

As the recovery unfolds from the most recent hurricanes, we can use these findings to carefully plan resettlement. The research calls for conscious attention to the voices of women head of households and pre-existing housing maps. It also calls for funds to allow households to reunite with their kin networks. These can help recreate the network infrastructures that can prevent the devastating downward spiral I witnessed in New Orleans. Stable housing, employment, and transportation must be made available in sites where networks are resettled, because it is in this context that we can be assured that the poorest of the poor, hit hardest by Harvey and Irma, and Maria, can re-establish their strategies for daily survival.