Changing climate and growing infrastructure demands have led to already socially vulnerable populations experiencing a more threatening hazardscape. While climate change is not the singular cause of catastrophe, it is widening the expanse of social vulnerability to disasters. For example, recent work in the Clear Creek watershed on the Texas Coast demonstrated that upwards of 40 percent of flood claims between 1999 to 2009 came from outside of the currently configured floodplain. This creates questions about who in addition to the previously vulnerable are at risk to disaster and demonstrates that, in an era of changing climate, the process of tracing pathways to exposure is more complicated. 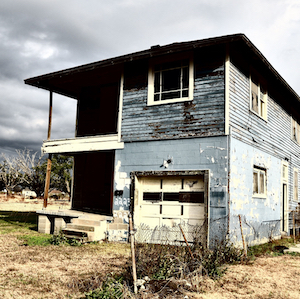 A blighted home in the Ninth Ward, a predominantly African-American neighborhood, remains unrepaired five years after Hurricanes Katrina and Rita devastated New Orleans. While many nearby areas have recovered to 90 percent of their pre-storm populations, only about 37 percent of households have returned to the Ninth Ward. ©The Shared Experience, 2010.

Further exacerbating this challenge is the fact that our nation does not currently have a robust inventory of the stormwater systems that are designed to help with flood mitigation. Even in cases where we do know what exists, the condition, current status, and capacity of those systems can be unknown or obsolete, particularly in disadvantaged areas. Indeed, the most environmentally unsound and physically vulnerable places are usually occupied by the most socially vulnerable populations. Thus while exposure is increasing for all, it is increasing even more so for marginalized groups.

Social vulnerability illuminates the insidious ways in which some groups are disadvantaged in their ability to resist, adapt to, respond to, and recover from natural hazards. The complex nature of recent events in Houston, Texas, and the broader Gulf Coast region encourages us to take a step back and reevaluate the context of the devastation. The intersection of global climate change, infrastructure crisis, and local urban development heighten the stakes for people already living at the social, economic, and political margins of society. Disaster scholars have long demonstrated that low-income people and racial minorities are the most likely to live in low-lying areas and in lower-quality housing, placing them at continual threat of flooding. This dynamic illustrates the intersection of social and physical vulnerability to disaster.

Just as vulnerability is not evenly distributed through the hazardscape, infrastructure robustness is not equal across communities. My recent research shows that racial neighborhood composition is a strong predictor of the stormwater infrastructure available. In comparison to predominantly white communities, black, Latino, and low-income neighborhoods have a disproportionate number of infrastructure systems that have outdated development codes, are not maintained, are less efficient in rerouting high peak flows during flash floods, and cost more to repair following a disaster. In short, these neighborhoods often receive lower levels of service from existing infrastructure, which puts them at greater risk in similar hazard conditions.

Moreover, when these systems don’t operate properly, water can be redirected to other areas and create residual flooding in places that are already inundated. These areas might also have outdated infrastructure and could be subject to residual flooding, localized flooding, and potential overflow of the nearby bayous. All this compounds the impacts to affected populations and complicates response.

Unprecedented Events in the Era of Climate Change

A word often paired with Hurricane Harvey is “unprecedented.” It is true that this disaster has introduced new levels of uncertainty, particularly as related to the intensity of rainfall, floodplain boundaries, storm surge from sea-level rise, and the condition of stormwater infrastructure. In this era of the abnormal becoming the new normal; of the unprecedented setting some kind of new precedent; research on these complex issues matters more than ever.

We are at a point in science, practice, and policy where we have to be proactive in hazard mitigation and critically explore the intersection of climate change, infrastructure, vulnerability, and catastrophe. It is also imperative that we move past discussing social vulnerability as a demographic variable and begin addressing the root causes of vulnerability. Social vulnerability to disaster is a function of everyday inequalities that are built into planning policy, practice, and implementation. From hazard exposure to disaster recovery, these disparities will inevitably have consequences for already marginalized groups.