When Safety is Not Enough: The Impact of Chronic Stressors on Rohingya Refugees in Exile

By Courtney Welton-Mitchell and Andrew Riley

The Rohingya, an ethno-religious group from the Rakhine region of Myanmar, have experienced decades of systematic persecution since the late 1970’s. In 1982, they were stripped of citizenship by the Myanmar government, making them one of the largest groups of stateless people worldwide. The most recent wave of violence against Rohingya began in August 2017, when a military offensive against them resulted in hundreds of thousands fleeing to Bangladesh and other neighboring countries. The violence was labeled a “textbook example of ethnic cleansing” by the United Nations and some human rights groups have stated there is mounting evidence of genocide. 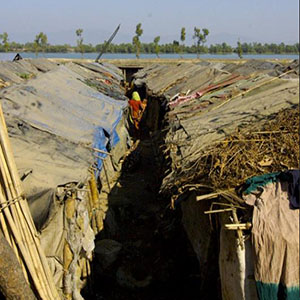 A woman makes her way between crowded structures in a refugee camp in Bangladesh. ©Digital Democracy, 2008.

Today more than 800,000 Rohingya reside in refugee camps and nearby settlements in Bangladesh. The Balukhali/Kutupalong megacamp is now the largest refugee camp in the world. Another estimated 100,000 Rohingya have settled in Malaysia and many more have been forced to migrate elsewhere, including Thailand and Indonesia.

Rohingya refugees might find relative safety in other countries, but for many, leaving their homeland results in a new set of challenges and deprivations.

Refugee typically don’t have the right to work, experience travel restrictions, and have limited access to healthcare and education. This is the case in both self-settled urban contexts, as well as in refugee camps, where limited access to food, water, and shelter can also be significant concerns. In addition, refugees can experience discrimination and harassment from local authorities and community members. Poor living conditions and a lack of human rights in the country of asylum can contribute to a pronounced sense of hopelessness.

Although humanitarians are increasingly focusing on the mental health needs of refugees and other displaced populations, little attention is given to the role of chronic stressors encountered in the host country, emphasizing, instead, events that occur during the acute phase of the emergency in the country of origin or while in transit.

Impact of Chronic Stressors on Mental Health Among Rohingya in Bangladesh

Rohingya have been living in Bangladesh for decades. Life there has been difficult, even before the latest influx of refugees. A few years ago, we and other colleagues conducted research with Rohingya in refugee camps near the southern tip of Bangladesh. After returning to the area in the past few months, it was evident that conditions had deteriorated. The speed and number of recent arrivals, as well as the associated makeshift nature of the camps, contributed to a pronounced overcrowding and lack of adequate organization, infrastructure, and services in the sprawling settlements. The situation is likely to worsen with the coming monsoon season and the severe risk of flooding and landslides it brings. The need for basic services, including water, health, and especially shelter and sanitation, far exceeds the ability to provide them, according to the United Nations Office for the Coordination of Humanitarian Affairs (UNOCHA).

In our initial research, the common stressors identified by the 148 randomly selected Rohingya who were interviewed included:

We then examined the impact of these chronic stressors on well-being. While it was clear that trauma directly affected mental health outcomes (measured here as symptoms of post-traumatic stress disorder), this relationship could be partially explained by chronic stressors. In addition, depression symptoms were associated with chronic stressors but not previous trauma exposure, which underscores the necessity of taking historical conditions and present context into account when designing interventions. Given the current situation in the camps, it appears daily stressors have worsened since this research was conducted.

Although Rohingya in Malaysia are not living in refugee camps, they do face similar challenges. Many indicate that life in Malaysia is far more difficult than they expected. During the initial phase of our current research with Rohingya in Malaysia, we asked 75 people to identify the stressors they encountered in their daily lives. The most common were:

Such stressors—especially lack of employment opportunities, insufficient food, insecure legal status, and fear of arrest by authorities—were perceived by those we spoke with as contributing to poor mental health outcomes and an elevated risk for intimate partner abuse. Participants said some husbands were becoming increasingly abusive toward their wives as the daily stressors of exile exceeded their ability to cope.

The Rohingya in Bangladesh and Malaysia often experience stressors that are exacerbated by displacement and statelessness. Stressors emanating from inadequate resources to meet basic needs and human rights violations can severely impact well-being.

Over the decades, many lessons have been learned about how to best support the recovery of those who have been forced to flee after years of persecution and successive waves of violence. Yet, there are still large gaps in the systems and services designed to support Rohingya refugees in Bangladesh and Malaysia. With each passing day, the conditions become more dire and future threats to the health and vitality of the population loom larger. Given the ongoing and unfolding nature of the crisis, we hope you will learn more about how you can address budget shortfalls by contributing to organizations that help the Rohingya.

While donations to humanitarian organizations are important to ensure adequate food and shelter for those living in the camps, we must do more to address human rights violations in Myanmar and in countries where Rohingya are living in exile. We can begin by holding the government of Myanmar accountable for crimes against the Rohingya, encouraging the government of Malaysia to sign the refugee convention, joining the global movement to end statelessness, and learning more about promoting dignity and autonomy by allowing refugees and other forced migrants the right to work and to education.