Who Will Protect Recovery Workers after Hurricane Harvey?

Recovery from Hurricane Harvey is going to take years, if not decades. As someone deeply concerned about the health, safety, and wellbeing of recovery workers, I want to know who will protect those who will do the work associated with flood cleanup and rebuilding. 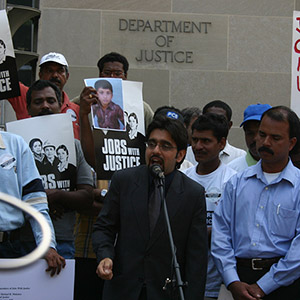 Workers recruited for post-Katrina reconstruction efforts rally in 2008 after being held against their will and forced to work in deplorable conditions. ©Barb Howe, 2008.

The George W. Bush administration took a quick and dirty approach to Hurricane Katrina cleanup—they suspended federal regulations that guaranteed environmental, labor, and health standards in the disaster zone and ensured competition in federal contracting. In addition, the administration suspended immigration enforcement—since many immigrants affected by Hurricane Katrina might have lost their documents in the disaster, employers were not required to ask for proof of employment eligibility. These actions enabled construction contractors to obtain large federal grants and to hire any workers that would accept the standards established by employers.

As Texas and the nation now confront the recovery from Hurricane Harvey, it is worth taking a closer look at the effect of those suspensions.

The suspension of the Competition in Contracting Act allowed no-bid contracts that paid construction contractors the estimated cost of a job plus any additional costs. As a result, recovery spending skyrocketed, often without comparable results. One way that costs rose was from hiring multiple layers of subcontractors, each of whom took their share of profits before the work was accomplished. Since subcontracts were allocated through the contractor networks, many Louisiana construction companies, whose businesses were damaged in the disaster, and their employees who were seeking work, were shut out from the recovery labor market. In other words, discriminatory contracting allowed local residents and construction companies that could have benefited from the federal enforcement of these laws to be excluded.

The post-Katrina suspension of the Davis-Bacon Act meant that employers with federal grants were not required pay their employees at the wage levels, with benefits and overtime, that prevail in a particular region. This means that those hired to perform construction labor on federally funded projects did not have to be paid a fair or living wage. Other suspensions meant that employers did not need to apply affirmative action in hiring or require workers to prove they were eligible for employment in the United States. Furthermore, by suspending the enforcement of Occupational, Safety, and Health Administration (OSHA) standards, there was no workplace oversight. Any violation of a worker’s rights was only enforced on the basis of worker complaints after the fact.

So how was the post-disaster construction labor force generated? While large- and medium-sized construction companies brought in out-of-state workers, many small contractors and homeowners recruited workers from the day labor pickup sites that sprung up in the New Orleans metropolitan area. These workers hauled debris, gutted homes, and installed tarps on damaged roofs—all while living in, damaged abandoned houses, moldy hotels, or tents in City Park. Many were unauthorized immigrants from Mexico and Central America who were already in the United States when the storm hit. Others were U.S. citizens and legal residents from the region who came to help the struggling city and earn a living. Still others were temporary guest workers recruited by employers through the federal H2B visa program. These workers were subjected to dirty and dangerous work in a toxic city, a scenario that is re-emerging in Houston as the toxic floodwaters seep into wreckage that will need removal, as well as the groundwater and soil that remains.

In October 2007, more than two years after the Katrina disaster, Congress heard testimony from workers in a hearing that looked at the Department of Labor’s performance in investigating and prosecuting wage and hour violations and protecting guest. The testimonies were riveting and stand as historical documentation of workers’ terrible working and living conditions, the abuses they faced, and the indifference of the federal government in redressing these abuses.

One worker, Jeffrey Steele, summarized his situation, and foreshadowed our situation now:

"I went to New Orleans to help and to be part of history. I did the dirty, hard clean-up work that was needed. But, like a lot of other workers, I was taken advantage of by contractor after contractor. I have been seeking justice, but haven’t seen it yet… This is not about [me] – it’s about the small men and women, like me, who don’t have a voice. There may be another disaster like this in some other state and town. Who can tell me how workers will be treated? Can you tell me who will protect us the next time?”

Hurricane Harvey is the next time. Now is the time to prevent the worker abuses that we saw after Hurricane Katrina. That means enforcing, rather than suspending, policies and protections that are in place to protect workers.