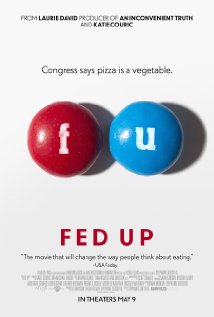 Fed Up is yet another eye-opening documentary about the nation’s eating habits and obesity epidemic. In the same vein as Supersize Me (2004) and Food Inc. (2008), Fed Up focuses on the relationship between sugar and childhood obesity, exposes the food industry’s relentless quest for profit above all else, and dispels the myths surrounding diet and exercise.

Narrator and executive producer, Katie Couric, examines the root of the obesity problem and interviews a variety of politicians—including former President Bill Clinton—nutritionists, physicians, and scientists. Besides presenting statistics and infographics, Fed Up introduces four severely obese teenagers who share their frustrations, their day-to-day struggles to eat healthier foods and lose weight, and their sense of failure and hopelessness.

This film squarely puts the blame for the obesity crisis on politicians and food industry. It exposes these industry’s immoral lobbying, misleading labeling, predatory advertising, and their overall disregard for public health. Furthermore Fed Up attacks politicians and the government, in particular the USDA, for having a conflict of interests. The nation’s cheese consumption serves as an example of the USDA’s double mission. As Americans gradually began to shift to skim milk in the mid-1980s, rather than whole milk, the dairy industry was stuck with huge amounts of leftover milk fats, so it decided on a big marketing push for cheese. This very successful push was praised in USDA industry reports, while other USDA reports concerned with the nation’s diet stated that people should cut their cheese consumption because it isn’t considered a healthy food.

Wondering where it all started, the film takes the viewer through a history of Americans’ dietary habits. It argues that the obesity crisis began in the late 1970s, when a U.S. Senate committee on nutrition, in an attempt to curb the increase of heart disease, prepared guidelines urging Americans to eat more fruit, grains, and vegetables, and fewer dairy products, eggs, and meat. According to the film, the egg, sugar, and beef associations teamed up and demanded a rewrite of the recommendations. As a result of their objections, the report was revised to call for buying more lean products instead of fewer rich ones. These guidelines did not lead to healthier diets, instead it kick-started the fat-free food boom. Sounds healthy at first glance, except that fat-free foods tend to contain much more sugar. As a result, Americans’ sugar consumption has doubled since the late 1970s.

Fed Up continues on the politics-over-nutrition front by discussing how, in the early 1980s, President Ronald Reagan made serious spending cuts to the National School Lunch Program, which was established in 1946 to ensure the health and wellbeing of American children. And who could forget that Reagan allowed ketchup, pickle relish, tomato paste and other condiments to count as vegetables. These cuts led to schools selling their kitchen equipment and laying off real cooks. Nutritious dinners were replaced by unhealthy alternatives, like burgers, fries, and pizza. As the teenagers featured in this documentary explain, not much has changed since then. There might be one healthy option, but it takes a lot of determination to choose the one healthy menu item over all the junk food that’s on offer.

One of Fed Up’s most refreshing segments criticizes the idea that burning calories through exercise, as promoted by Michele Obama’s “Let’s Move” campaign, can undo these abysmal eating habits. By showing how much exercise one needs to compensate for a candy bar or bottle of soda, and the frustration of the obese teens who attempt to follow Ms. Obama’s advice, it becomes clear that the caloric math doesn’t hold up. “We are not going to exercise our way out of obesity,” one nutritionist says. Which is why, according to Fed Up, it is time to hold the food industry and the government accountable for creating this deadly epidemic, rather than putting all the blame on people who are overweight.