As darkness fell in Morovis, residents gathered under a street light to continue discussions about hazard risk and preparedness. ©Lindsay Davis, 2019

After recent earthquakes in Puerto Rico, landslide debris blocked major highways and disrupted travel in the southwest part of the island. The situation wasn’t entirely unfamiliar—the country experienced an alarming 70,000 landslides triggered by Hurricane Maria in 2017. It was during community meetings about those hazards that the U.S. Geological Survey (USGS) first learned that the island’s residents were in need of better information about landslides and what to do about them. That resource is now a reality.

The Landslide Guide for Residents of Puerto Rico has just been released in both Spanish and English and is available online and in print. The guide—which was created by the Natural Hazards Center, the University of Puerto Rico, Mayagüez, and USGS, along with contributions from partners across Puerto Rico—is an education and outreach resource to help the public understand the causes, signs, and consequences of landslides, as well as practical steps for preparedness, mitigation, and response.

After Hurricane Maria, the project team facilitated conversations among community members and Puerto Rico’s emergency managers about their experiences with natural hazards and future hazard preparation. During the course of these discussions, it became clear that residents of Puerto Rico wanted more scientific information about hazards—and landslides in particular. Some people reported feeling less informed about landslides relative to hurricanes and earthquakes. They requested information that could help them recognize the signs of landslide risk and understand where and why landslides might happen.

It was from this feedback that the Landslide Guide started to take shape. The educational booklet, which was designed to be broadly accessible to youth and low-literacy populations, was created collaboratively through extensive consultation with emergency managers, geological scientists, community organizations, and the residents of landslide-affected communities in Puerto Rico. Two undergraduate research assistants from the University of Puerto Rico Mayagüez led the development of graphics and content for the guide. Thoughtful feedback was given by residents in two especially impacted communities, Utuado and Morovis, and their ideas were also ultimately incorporated into the final Landslide Guide.

The guide defines a landslide as “a downward movement of soil, rock, and organic material affected by gravity and influenced by the shape of the terrain.” But not all landslides are the same. While some occur slowly over longer periods of time, rapid landslides are the most dangerous. Landslides are more likely to occur on unstable slopes and can be triggered by a number of different factors, including heavy rainfall, earthquakes, improper drainage, and deforestation. 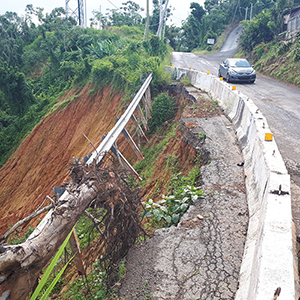 Landslides in Puerto Rico after Hurricane Maria hampered transportation and made some roads impassable. ©Stephen Hughes, 2017

The Landslide Guide encourages residents to learn about and check for the signs of landslide risk and ground movement around their homes. Cracks in pavement and buildings or curved tree trunks on hillsides can point to landslide danger. If such signs are spotted in time, there are steps people can take to reduce their risk—including improving drainage around their houses and restoring vegetation on slopes. Tree roots, too, can dramatically improve the stability of hillsides.

Residents also need to be aware that landslides might impact roads and limit their mobility in devastating ways, particularly in the wake of a hurricane. After Hurricane Maria, for example, residents of Utuado were essentially trapped after significant landslides blocked the main roads in and out of their community. In cases where this is a possibility, preparation for an event might look similar to hurricane or earthquake preparedness where individuals need to stock food, water, and medical supplies.

The Landslide Guide is the foundation of an upcoming suite of education and outreach materials that will be created about landslide hazards in Puerto Rico. These educational tools will help start and facilitate conversations about understanding and mitigating landslide risk in Puerto Rico.

The Puerto Rico Planning Board, for example, plans to share the Landslide Guide with home inspectors as part of their training, and disaster recovery organizations will use landslide materials to inform recovery activities on the island. The guide and other resources may be particularly useful for community leaders, emergency managers, engineers, and educators in Puerto Rico.

Additional resources—including slide decks, one-page summaries, and social media materials—will be made available through the project webpage, so check back for updates. To request print copies of the guide, email slidespr@uprm.edu.