Cost-Effective Building Regulations Should be Embraced, Not Feared

Recent hurricanes, tornadoes, wildfires, and other disasters have had widespread economic and societal ramifications beyond the obvious suffering of residents. Hurricane Harvey temporarily decreased employment in South Texas, the California wildfires devastated wine producers, and Hurricane Maria left Puerto Rico without power, water, and jobs for its citizens.

Although we cannot control Mother Nature, it is within our grasp to lessen the impacts of disaster and increase community resilience. Regulations that ensure homes are built to safely withstand potential hazards is one way to do that. To achieve such improvements, however, will require leadership, collective will, and a whole community effort.

Instituting regulations to protect against natural hazards aren’t always well-received because they are thought to cost too much. But my research shows that mitigation can be cost effective in the short- and longer-term. When actions that lessen disaster impacts can be shown to pay for themselves, the ability to move from theory to adoption is improved. 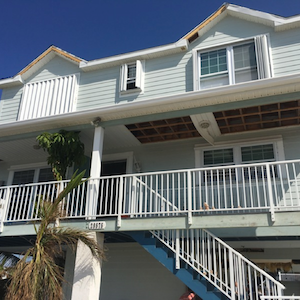 A house in the Florida Keys shows repairable damage after a storm. © @DavidPrevatt2, 2017.

One such action is strengthening building standards to protect against violent wind storms. For instance, after Hurricane Andrew in 1992—which damaged 25,000 Florida homes and drove 11 insurance companies to bankruptcy—wind engineers developed design methods to strengthen the ability of a home to withstand wind damage. When these methods are used, homes are less likely to suffer wind damage and when damage does occur, it is minimized.

By 2002, the state of Florida had fully implemented a statewide code that adhered to these enhanced design principles. Soon afterward, the state was struck by seven land-falling hurricanes, four of which reached wind speeds sufficient to be rated Category 3 storms. Afterwards, I and my co-authors at the Wharton Risk Center and National Center for Atmospheric Research examined the performance of the Florida Building Code. We found that homes built to the new code had up to 72 percent less damage and resulted in $6 in loss reduction for every $1 spent in added cost, with an expected payback of less than 8 years. Despite such impressive results, Florida is alone in adopting a statewide code based on wind engineering principles—and pending legislation could reduce those standards.

While municipalities do not have to wait for states to impose strong local building codes, many officials and community leaders fear that the added cost of adopting more stringent standards will drive away development, along with the additional tax revenue and economic activity it brings. Here, another case is instructive to help assuage those potentially unfounded fears.

Moore, Oklahoma, adopted a stronger building code after the 2013 tornado that killed 24 people, including seven children at a local elementary school. While the raw tragedy of that storm likely played a role in their action, it was still a risky move since potential loss of development could follow.

To determine the impact of the codes on the Moore real estate market, I and another economist collected real estate transaction and building permit data from Moore and adjacent Norman, Oklahoma. We used a Difference in Differences regression model to test for statistical differences between Moore and Norman both before and after the implementation of the new code. We ran three tests—first for price per square foot, then for weekly sales, and finally for new permits. In each case, there was no change in the new home market in Moore as compared to Norman, from before the code implementation and afterward.

The results of this study call into question the notion that developers will simply move projects to communities where costs are lower. One reason for this could be that better construction is in demand and the town that provides it is rewarded with homebuyers seeking increased safety. Studies have shown that mitigation can increase value in real estate markets where there is heightened demand for homes with mitigation features. While Moore might have taken a risk, the community provides an example of how towns can benefit when they embrace strong construction standards rather than fear them.

Hazards research cannot stop disasters from occurring. But we can provide guidance to communities on how to reduce impacts. When policymakers are too often willing to shun new regulation, it is imperative to illustrate that while costs do exist, so do benefits. Often, the societal benefits of safety, wellbeing, and even future economic development, far exceed initial costs.