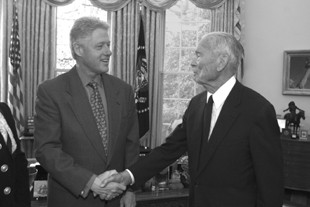 I believe that each of us finds greatest use and greatest satisfaction in a life which respects and kindles the spark of the divine that is found in the conscience of every other member of the human brotherhood, and which nourishes the harmonious growth of individual men and women.

Awards and Institutions Established in Honor of Gilbert F. White

The Goddard-White Award honors the contributions made to floodplain management by Gilbert White and Jim Goddard (1906-1994). This award is given by the Association of State Floodplain Managers (ASFPM) to individuals who have been instrumental in carrying forward the goals and objectives of floodplain management throughout the nation. It is an indication of the level of esteem the association holds for the two namesakes as well as the recipients, and is the association's highest honor.

To promote discussion on national floodplain management policy and issues, the Association of State Floodplain Managers Foundation has established a forum that brings together leading experts in the field. The goals of the forum are to develop policy recommendations and establish an ongoing record of flood policy issues and directions for the future. The forum has been named in honor of Gilbert F. White, whom the association describes as "the most influential floodplain management policy expert of the 20th century." The forum is not only a tribute to his work, but also a recognition of the success of his deliberative, consensus approach to policy analysis and research.

Periodically the forum explores one pressing flood policy issue by hosting a dialogue among approximately 50 experts, including government, industry, and academic stakeholders. Again, the goal of each forum will be to provide recommendations for policies that will reduce the human casualties and economic losses associated with flooding, as well as policies that will protect and enhance the natural and beneficial functions of floodplains. The discussions and recommendations of each forum are summarized and distributed as a report by the ASFPM Foundation.

The Association of State Floodplain Managers Flood Hazard Fellowship Fund, established by the ASFPM Board of Directors in 1988, supports awards to recognize and encourage individual achievement in the profession of flood hazard management. The fund was established in the spirit of advancement of the field of floodplain management as practiced by Gilbert White, the initial contributor to the fund. In establishing this fund and award, the association cited White as devoting "a lifetime . . . to promoting floodplain management concepts and reducing the human and material impacts of floods and other hazards . . . [he] embodies the spirit of advancement and achievement to which the Association subscribes." The fellowship is not necessarily awarded every year.

Resources for the Future (RFF) offers resident fellowships for each academic year in honor of Gilbert F. White, "retired chairman of the RFF board of directors, distinguished geographer, and statesman of science." The fellowships are intended for researchers who have a doctorate degree and wish to devote a year to scholarly work in areas related to natural resources, energy, or the environment. Social scientists as well as natural scientists interested in policy-relevant interdisciplinary research are encouraged to apply. Contributions can be made to the Gilbert White Fellowships, Resources for the Future, 1616 P Street NW, Washington, DC 20036.

In 2001 Gilbert White and Harvard scholar Arthur Maass donated their extensive personal research libraries to the Corps of Engineers' Institute for Water Resources in Alexandria, Virginia. The collection is considered one of the most extensive on water resources planning in the world. This room is dedicated to the contributions made by White and Maass to the profession of water management. The Institute has said that "no other scholars in the twentieth century had more influence on the Corps of Engineers. Their ideas have not been overcome by time; if anything, the world is still catching up to the concepts they articulated fifty years ago."

The AAG Hazards Specialty Group encourages students writing Ph.D. dissertations and masters theses to consider applying for the Gilbert F. White Award, which is presented to the author of an outstanding thesis or dissertation about natural or man-made hazards completed within the previous two years. Recipients of the White Award receive $500, a plaque, and an autographed copy of White's two-volume Geography, Resources, and Environment.

This award was established to provide fellowship funding for one or two outstanding geography Ph.D. students at the University of Colorado who are in their final semester of dissertation preparation. The award is based on both financial need and scholarly merit.

In establishing this endowed chair, the university administration has stated, "During his long career, White made many significant scientific contributions to the study of floodplains and water management, providing some of the initial foundations for what later became known as sustainability science. Naming the chair for White honors his vast contributions to the broader science of sustainability, a core transdisciplinary theme at Arizona State University."

Billie Lee Turner, the first scholar to occupy the chair, also stated, "The life and accomplishments of Gilbert White set the standards by which all other researchers of human-environment relations are judged. He was an inspiration and mentor to me, both directly and through his students."