Preparing for Drought on the Ranch: Lessons from 2012

Drought is a fact of life on the U.S. Great Plains; rangeland managers need to plan ahead to avoid devastating losses. A number of factors can make managers resistant to planning, however. There’s always uncertainty about the length or severity of droughts—or if there will even be a drought—for instance.

Planning ahead can mean making decisions that raise costs or decrease revenue, so it might seem tempting to take a wait-and-see approach. Yet not preparing can be expensive, too. It seems the only real solution is to learn how to prepare more effectively. Luckily there are new evidence and resources that can help managers do just that.

Our research on the 2012 drought in Nebraska and South Dakota provides insight into decisions that were made by livestock and rangeland managers. The drought and results from the subsequent survey we conducted provided an opportunity to compare the management of different types of livestock operations at different severities of drought during the same time period. These findings can improve the understanding of how to plan for drought: 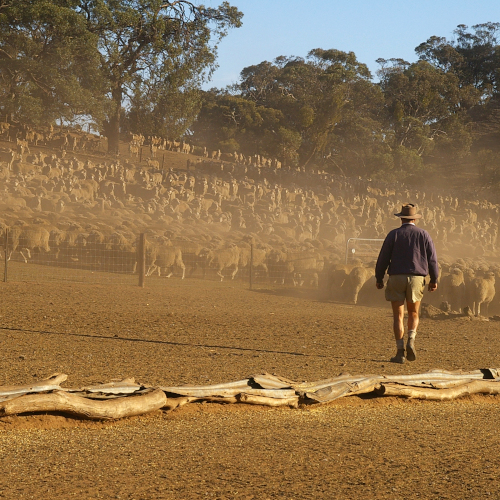 A farmer moves his sheep to a suitable pasture. Image Credit: Shutterstock.

No single plan allows perfect drought management for every type of operation. Operations vary, even among one relatively homogenous population of cow/calf livestock producers in the U.S. Great Plains. Managers might consider their vulnerability to drought to be very different from that of their neighbors. For example, cattle production enterprises that are focused on producing calves from cows on grazing land dominate the region, but are also commonly associated with other types of cattle enterprises (e.g. grazing feeder animals during the summer). Beyond grazing land, managers may raise or purchase hay, cornstalks, and other sources of livestock feed. Operations can also vary in terms of grazing practices, access to irrigation, and economic status. These differences define how the manager is able to adapt during drought.

Advance planning can increase drought response options. Drought plans allow managers to be more strategic in their drought response. Managers can work to improve the availability and flexibility of the operation’s resources (e.g., alternative feeds or other grazing lands) before drought occurs so they can take less costly and less risky actions during drought. In 2012, almost all managers in the region took some type of action to supplement their livestock forage supplies because of the drought, but some had more options for response than others. For example, having stockpiles of hay or alternative feed sources on hand provided a buffer that could be used during drought. Others without this buffer may have had to take other more costly actions. Adapting the operation to support strategic drought response is one important aspect of the plan.

Planning ahead can make difficult decisions easier during drought. Difficult decisions come with a cost, either in extra expenses or lost revenue. In 2012, many rangeland and livestock managers were forced to make herd reductions in response to drought. In some cases, managers could lower the cost of these actions because of the flexibility that was built into their operations. For example, some operations had herds that could be moved to other forage resources so that livestock numbers and long-term animal productivity were not reduced. However, when the buffer or resilience of the operation is surpassed, selling animals might be necessary. Those who reported the greatest damages to their rangeland resources were also the ones who made herd reductions in 2012. Without a clear plan of action, managers might put off these difficult decisions until after the damage to resources is evident. But because forage production in the region is driven by April-June precipitation, the decision to reduce herd sizes can be reliably made by mid-summer, which can minimize the expenses of feeding, lost revenue due to lowered livestock prices, and long-term damage to rangeland health. Drought plans should address how and when to take action so that risk to the operation and stress to managers is reduced.

Insurance options shouldn’t be overlooked in drought planning. The use of Pasture, Rangeland, and Forage (PRF) Insurance is a newer and potentially important part of a rangeland drought plan. The insurance provides payment for lack of precipitation during key (manager-determined) months. The financial benefits can provide capacity for managers to purchase supplemental hay or other feed and avoid destocking pastures. Managers who used the insurance in 2012 were also more likely than others to lease, rent, or purchase additional land for grazing.

The National Drought Mitigation Center has created the Managing Drought Risk on the Ranch website (https://drought.unl.edu/ranchplan) to support rangeland manager efforts to plan for drought mitigation, response, and recovery strategies. In a future that will include increased climate variability and extremes, rangeland managers will grapple with questions of how to plan for drought and what it means to be prepared. Planning for the easy and the difficult decisions is an important part of that.