Stress during pregnancy due to a natural disaster in Vanuatu: Effects on infant development in a low-middle income country

Psychosocial stress during pregnancy affects not only the mother, but also her child. At high levels, maternal stress hormones can cross the placenta and affect fetal development1. Prenatal stress has been associated with poor adverse birth outcomes2, such as smaller birth length3 4 5, weight3 5 6, and gestational age3 4 5; low birthweight7 8; and preterm birth7 8 9 10. Natural disasters provide excellent models of prenatal stress because the stressor is independent of maternal and household traits that might also affect infant growth11. However, these studies are difficult to design because we must act quicky after the disaster to create and distribute the surveys if we are to obtain reliable indices of stress.

In 2015, the Republic of Vanuatu, a low-middle income country in the South Pacific, experienced a major cyclone that left many villages in ruins. Building on our past experience analyzing population health in Vanuatu12 13 14 15 16, and analyzing prenatal stress in other settings following natural disasters4 17 18, we sought to create a study of prenatal stress following a natural disaster in Vanuatu.

Our primary research question in this round of data collection was: What was the degree of hardship, distress, and dietary change among adult women in Vanuatu due to Cyclone Pam? Do patterns differ among pregnant and non-pregnant women?

The data collected after the disaster with support from the Natural Hazards Center provides the baseline for analyzing relationships between hardship, distress, and nutritional change due to the cyclone, and the health outcomes of infants who were in utero during the cyclone.

We created a self-report survey to assess maternal demographics (age, number of children, area of residence); hardship and distress due to the cyclone; and nutritional patterns following the cyclone. Women of reproductive age on four islands (Aneityum, Efate, Erromango, and Tanna) were invited to participate.

The final survey packet is attached with the report. Surveys were translated into Bislama, the local language, by K Dancause and colleagues at the Vanuatu Ministry of Health, and reviewed by health officials and local residents before distribution.

Objective Hardship was assessed using a custom-made survey of experiences during and following the cyclone, based on those already created and used in three other studies of prenatal stress in which K Dancause has participated: Project Ice Storm (Canada), the Iowa Flood Study (USA), and the Queensland Flood Study (Australia)11: . The surveys are created to measure four aspects of hardship following a disaster: Threat, Loss, Scope, and Change. The measure in Vanuatu was an adaptation specific to the country and to the disaster. We assessed damage to the village, house, and garden; loss of livestock; loss of personal items; accessability of food and water after the cyclone; women’s perceptions of their current access to food, water, and housing; and the degree to which their lives had returned to the way they were before the cyclone.

Subjective Distress was assessed using a Bislama adaptation of the Impact of Events Scale – Revised19, the questionnaire commonly used to assess symptoms of post-traumatic stress disorder. All questions were translated into Bislama, reviewed by health officials and local residents, and then questions that were redundant following translation were trimmed. Women reported on a scale of 0 (“not at all”) to 4 (“all the time”) the extent to which they experienced symptoms in three categories of distress – hyperarousal, avoidance, and intrusive thoughts – relative to the cyclone.

Nutritional patterns were assessed using 24-hour dietary recall in which women were instructed to write everything they had eaten in the morning, afternoon, and night the previous day; and a food frequency questionnaire asking women how many times in the past week they had eaten food from 15 different categories.

Birth Records: Following the expected delivery dates of all pregnant women in the sample, we will return to Vanuatu to scan birth records routinely collected by the Vanuatu Ministry of Health. These include mothers’ names and location of residence as identifiers, complications with the pregnancy (maternal illnesses, etc.), and infants’ characteristics at birth (gestational age, birth weight, birth length, head circumference, etc.) Data for women who provided consent for us to access medical records will be entered into a database to allow us to analyze relationships among hardship and distress due to the cyclone, and health outcomes of the pregnancy and the infant.

General psychosocial health: At the time of the collection of birth records, we will begin the collection of data on general psychosocial health measures among pregnant women, including the State-Trait Anxiety Inventory20, Perceived Stress Scale21, Pregnancy Experience Scale22, and the Edinburgh Postnatal Depression Scale23. Collecting these data one year after the cyclone will help to ensure that women’s responses are not biased by the distress associated with the cyclone. Together with the data on hardship and distress from the cyclone, and data on birth outcomes, the complete dataset and will allow us to analyze the effects of both acute and chronic stress during pregnancy on infant outcomes in Vanuatu.

We collected demographic, stress, and nutritional surveys for 800 women on five islands affected to varying degrees by the cyclone. Of these, 184 were pregnant at the time of data collection or during the cyclone. Table 1 indicates descriptive statistics for demographic variables for pregnant and non-pregnant women.

One-way ANOVA indicated that mean distress scores differed significantly among the survey islands (p<0.001). Mean distress scores were 1.7 out of 4 on Aneityum, 2.0 on Tanna, 2.3 on Efate, and 2.5 on Erromango. Scores were similar for each category (intrusive thoughts, avoidance, hyperarousal). 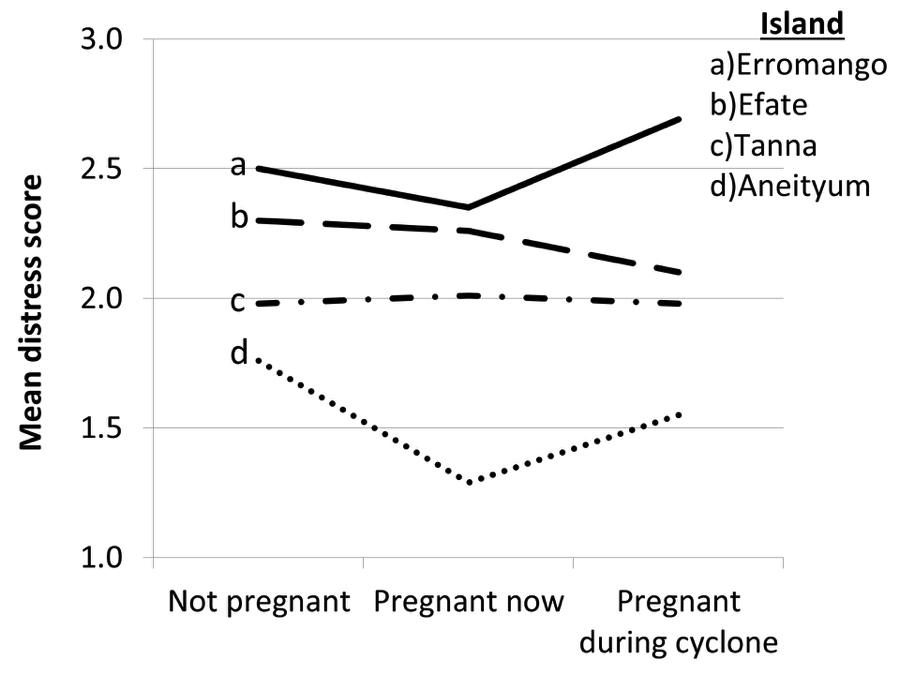 The major applications of this research will be evident following analyses of birth records. However, even our preliminary analyses of maternal distress could potentially guide disaster response in similar settings.

For example, our preliminary results highlight that compared to industrialized nations, age, level of education, and individual damage and loss might be less strongly associated with women’s distress than expected. Furthermore, pregnant women were no more or less susceptible to distress due to the disaster than non-pregnant women. Rather, family size was a major predictor of distress following the cyclone. Based on these findings, community-level resources for women and children might have a greater impact in this setting than individual interventions.