Disasters and crises place often insurmountable demands on the emergency response apparatus of local, state, and federal authorities. In late August 2017, Hurricane Harvey descended upon Houston, a metropolis of 2.3 million people, and hovered over the city for days. As floodwaters continued to rise, so did the number of 911 calls for rescue, overwhelming Houston’s emergency response services, and forcing many to rely on their offline and online networks to seek help during and after the hurricane. This paper investigates the effect of community-level social capital on fatalities and debris removal, and the impact of social media on the governing infrastructure during Hurricane Harvey. Using geo-data on fatalities, levels of social capital, and debris removal, along with interviews, the author finds that: fatality rates were, in fact, lower in communities with higher levels of social capital; debris removal was expedited across communities with higher levels of social capital; and social media played a Janus-faced role during Hurricane Harvey—placing a heavy strain on government infrastructure—but also aiding agencies in conveying critical information in a time of need.

Hurricane Harvey made landfall in Texas on August 25, 2017. The storm hovered over Houston for four and a half days, resulting in catastrophic flooding from the rainfall and subsequent dam releases throughout the Houston area. The Harrison County Flood Control District (HCFCD) recorded record-breaking rainfall measurements as high as 47 inches (see Figure 1). This disaster, like many before it, raised questions about what coastal cities such as Houston can do to cope with unexpected shocks and disturbances. Social capital—the ties that bind us—has and will continue to play a critical role as communities endure crises and environmental shocks, such as those posed by climate change (Dynes 20061; Chamlee-Wright 20102; Prasad et al. 20143). 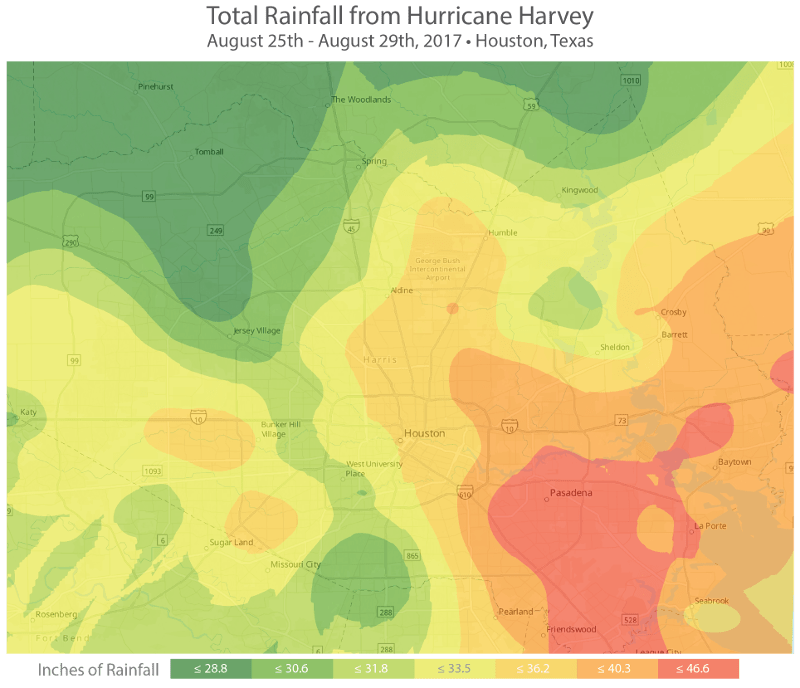 The aim of this research is twofold: to explore how social capital interacted with different outcomes of Hurricane Harvey and to understand the effect that online social media had on the governing infrastructure. For the first research objective, I explored the interactions between social capital, fatalities, and debris removal. For the second research objective, I conducted a series of interviews in the Houston area to gain a greater understanding of how social media affected the larger governing infrastructure during Hurricane Harvey. To carry out these two research objectives, I tested the following three hypotheses:

To test H1 and H2, data (see Table 1) were collected on Harvey-related fatalities, debris removal, levels of social capital across communities in the Houston area organized by U.S. Census Block Groups (BGs), and a number of control variables used in linear and logistic regression to account for alternative explanations.

To test H2: Communities with stronger levels of social capital experienced expedited debris removal, debris data were sourced from the City of Houston 311 website. Individuals who called to request debris pickup following Hurricane Harvey were added to the 311 database, and the Houston Department of Solid Waste Management issued open and close dates for each request. For this analysis, I calculated the time that elapsed from the time the ticket was opened and closed to measure how long it took for the Department of Solid Waste Management to pick up the debris. This data was used as both an interval variable, to express the total number of days it took to close the request, and a binary variable, to express same-day pickup.

Community-level social capital data was generated from indicators from ESRI Business Analyst and organized into 418 BGs across the Houston area. Indicators were aggregated and weighted equally to compute a single social capital index score and spatially joined with each of the 7,215 debris tickets. Indicators include the percentage of people in a BG who: participated in any public activity in the past 12 months, attended a public meeting on town or school affairs, served on a committee for a local organization, volunteered for a charitable organization in the past 12 months, wrote or called a politician in the past 12 months, voted in a federal, state, or local election in the past 12 months, or attended a political rally, speech, or organized protest. Index scores ranged from 12 to 34. Using the Jenks natural breaks classification method, five categories were created to represent the strength of social capital across BGs: very strong (≤ 34), strong (≤ 29), moderate (≤ 24), weak (≤ 19) and very weak (≤ 15).

Variables for rainfall, total population, and homeownership were included to test for alternative explanations. Rain measurements were obtained from 231 rain gages throughout the Houston area and provided by the HCFCD; measurements from damaged rain gages were excluded by HCFCD request. The contouring of rainfall measurements in Figure 1 was generated using the Empirical Bayesian kriging interpolation method. The total population and percent of homeownership in each BG were sourced from ESRI Business Analyst.

I conducted a series of in-depth interviews to test H3: Higher levels of online social media activity led to greater strain on the governing infrastructure during Hurricane Harvey. The interviews aimed to understand how Houston was affected by Hurricane Harvey, how agencies used social media during Harvey, and what challenges individuals faced when responding to the needs of communities in the Houston area. A description of each interviewee is provided below.

As a starting point to test H2, I conducted an analysis of variance (ANOVA) to observe whether there were differences between the rates in which debris was removed across communities and varying degrees of social capital. Differences across the five predefined levels of social capital (very strong, strong, moderate, weak, and very weak) were calculated. 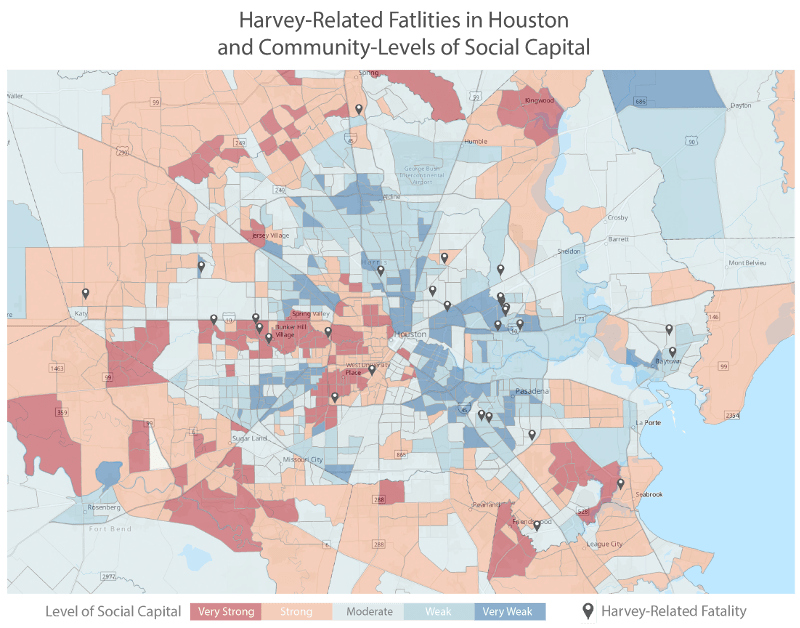 The ANOVA confirmed that communities with higher levels of social capital did, in fact, enjoy expedited debris removal. In the analysis of variance, the dependent variable was the number of days it took the Department of Solid Waste Management to remove debris from the site, and the level of social capital within the community was the independent variable. The ANOVA produced a p-value of .000, with descending means from very weak social capital (μ = 3.15) to very strong (μ = 1.32) social capital, allowing us to reject the null hypothesis (see Table 2). In this case, we see that there is a statistically significant difference between the disposal of debris across the five categories of social capital (see Figure 3).

Table 2: ANOVA for the effect of social capital on debris removal 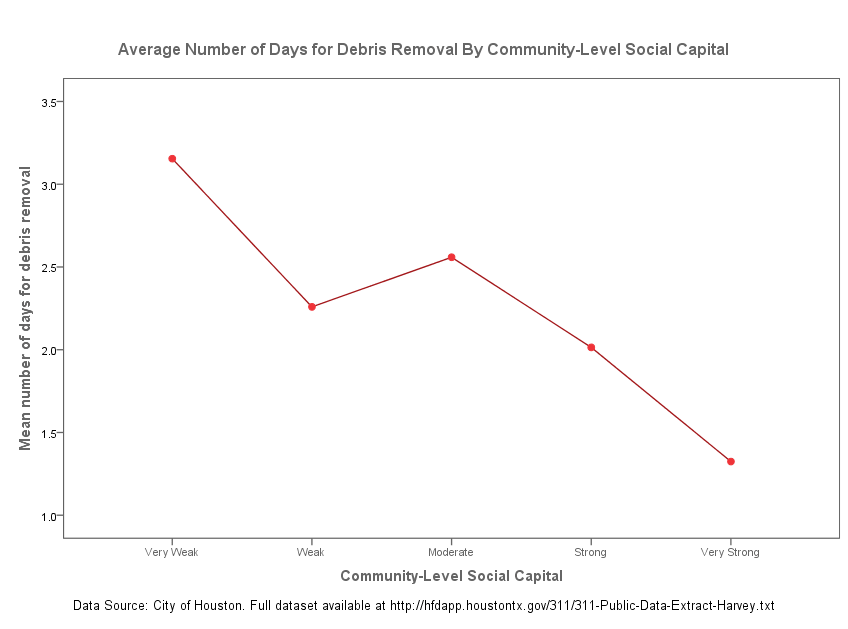 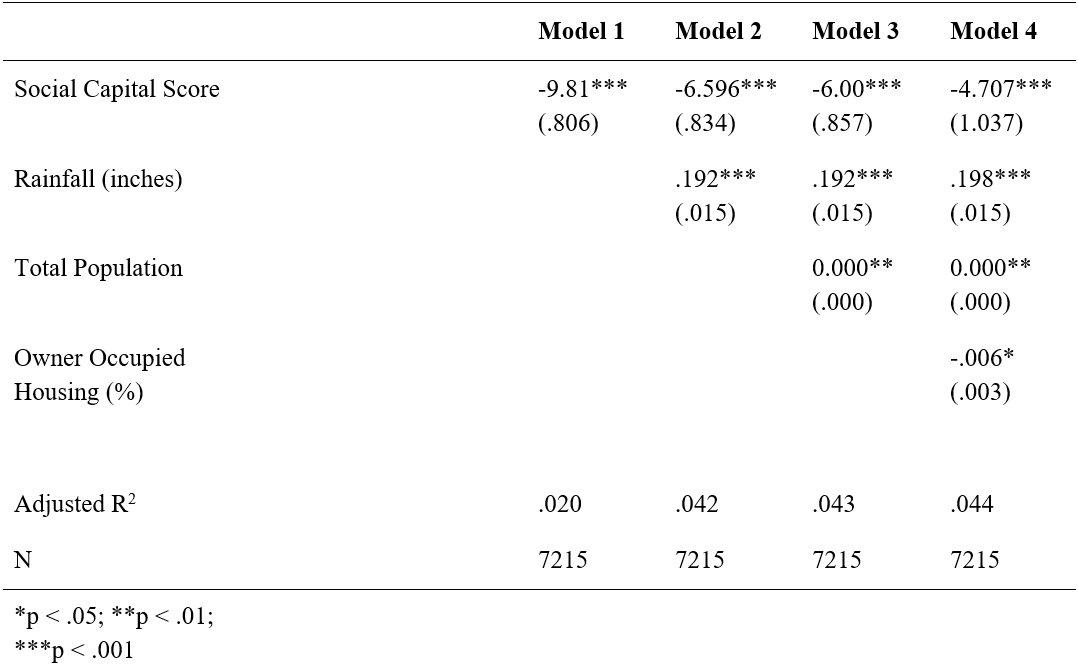 Table 3: Linear regressions of number of days to remove debris on social capital 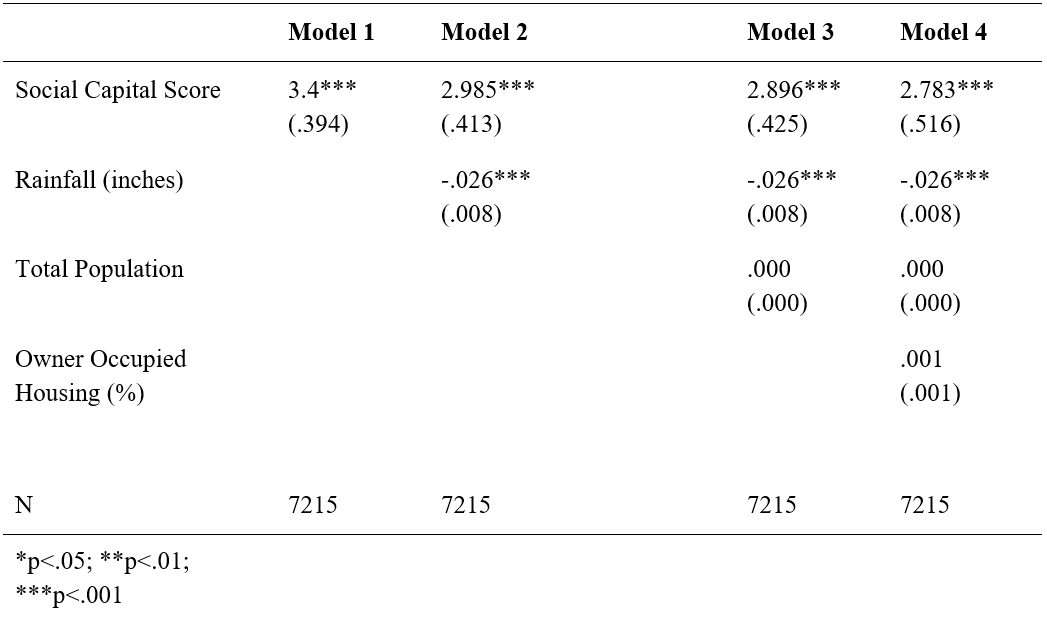 In the course of my interviews in Houston, it became abundantly clear that social media is both a help and hindrance during large-scale disasters such as Harvey. Calls for help on social media apply great strains on emergency administrators, but social media also offers multiple platforms that agencies can use to convey critical information during and after hurricanes.

The conventional model of emergency response to disasters among local, state, and federal agencies is no more. The Harris County Office of Homeland Security & Emergency Management headquarters, located in Houston, is a stunning visual example of the physical infrastructure needed in a large metro area to process and respond to minute-by-minute changes. The headquarters is equipped with a Joint Information Center (JIC) that allows for the organization of timely information in emergency situations. 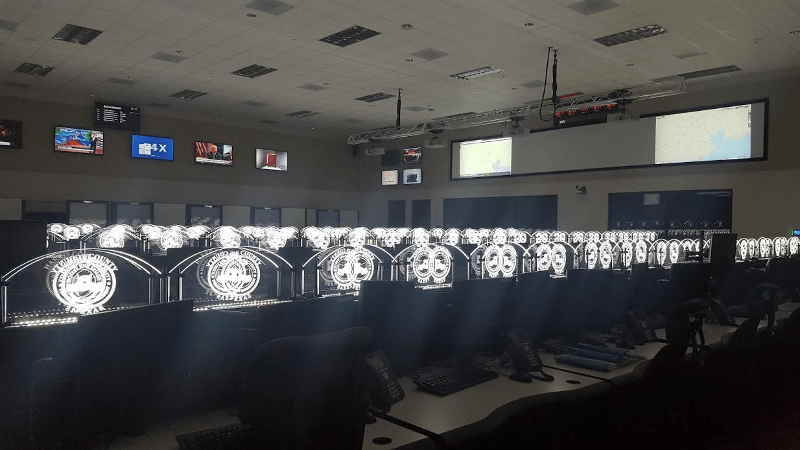 However, these agencies are also adapting to the new landscape of high volumes of instant information from individuals across multiple social media platforms. As Officer Douglas from HPD put it, “It’s like trying to drink water from a fire hose.” Emergency dispatchers are now tasked with handling traditional 911 calls, for people whose calls get through, as well as monitoring social media posts. Three HPD officers were assigned to monitor social media calls for help during Harvey. However, as Officer Douglas recalled, the process of cross-referencing social media posts for help across multiple platforms against 911 phone calls was “not efficient” and “sluggish.” “It was way too much, too challenging,” she reported.

As streets became impassable, private citizens with boats and an ad hoc volunteer group known as the Cajun Navy, among others, turned to social media to see how they could help. Using apps like Zello, individuals—even Congressman Culberson, who represents the Houston area—dispatched able individuals to locations posted on Facebook, Twitter, and Nextdoor. Almost overnight, a powerful, informal, bottom-up network of emergency responders was borne.

As the saying goes, "It's not what you know. It's who you know." In the case of Hurricane Harvey, we observed lower fatality rates and expedited debris removal in communities with higher levels of social capital. We also witnessed the activation of a new bottom-up network of individuals and ad hoc citizen-led groups who responded to calls for help that were broadcast on social media platforms.

Policy makers should consider programs that have the potential to generate trust, norms of reciprocity, and civic engagement. Investment into social ties, and deepening reservoirs of social capital, have the potential to change future community outcomes after disasters. For example, time-banking programs, designed around social networks, have enabled community users to both offer and receive services that are assigned equal value. These programs have shown that the individuals who utilize this form of service exchange benefit from improved levels of social capital and health, especially among low-income individuals and those who live alone (Lasker et al. 20116). Community currencies—forms of currency earned through volunteering or bartering in local communities—have been found to increase levels of generalized trust (Richey 20077). Recent studies have also found that intervention programs designed with goals of leadership development (Brune and Bossert 20098), microfinance, and HIV education (Pronyk et al. 20089) have resulted in increased levels of social capital, despite the fact that these programs weren’t designed with those explicit goals.